Rom-Coms: To Love or Not to Love, That Is the Question 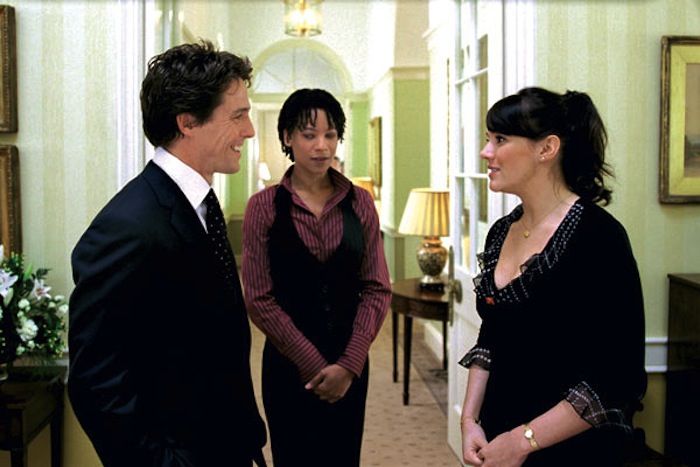 Hugh Grant (left) and Martine McCutcheon (right) in “Love Actually.” In our debate, the pro-rom-com side sees this relationship as endearing and romantic. The anti-rom-com perspective, however, takes issue with the power dynamic at play between the pair. | Courtesy of Universal Pictures

Annie: Okay, I’ll admit it: I love romantic comedies. I know, I know, they are unrealistic, basic and often not that funny. Inspite of recognizing this, I can’t help it, I love them. There is just nothing like relaxing on the couch, turning my brain off and enjoying a good rom-com. They aren’t Oscar-worthy by any means; but they are entertaining and sometimes, they are just what a girl needs. There are times for rom-coms and then there are times for intellectually stimulating, thematically stunning films. All I’m saying is rom-coms are great, and I would be devastated if they suddenly disappeared from the movie industry.

Ilana: To be blunt, I have never been able to immerse myself into the lackluster world of rom-coms. I’ve tried, truly I have, but they have never been able to grasp my attention. The repetitive, sexist and unrealistic plots of the romantic comedies plaguing the movie industry are a complete and utter turn-off. Often, when I share my rom-com opposition with friends, their response is something like: “Who doesn’t love to watch two people fall in love?”. Well, I don’t. I find them agitating, monotonous and despite their female target audience, anti-woman. Diverging from Annie’s logic, they are simply not what this girl needs.

Annie: Ilana makes a fair point; rom-coms aren’t for everyone. However, I do think that everyone can find something that they like (and dislike) about every movie. When considering rom-coms, I wouldn’t necessarily say “who doesn’t like to watch two people fall in love?” For me, watching a romantic comedy is more about watching the progress of the relationship than it is about watching two people fall in love. The whole story is about the hope that lingers somewhere deep inside a girl’s heart at the possibility of one day finding that perfect relationship that makes her realize why nothing ever worked before.

Rom-coms are just light and fun; you don’t have to be in any particular mood to watch them, you just sit down anytime, anyplace and enjoy. But there is one rom-com in particular that I can’t simply sit down and watch; it demands a particular time and place. Every year around the holidays, I get cozy with a cup of tea and watch “Love Actually.” In my opinion, “Love Actually” is one of the best romantic comedies ever made. It has something for everyone: stories of young love, awkward love, true love and fleeting love. In the end, though, it is really about relationships and timing and never being afraid to go after what you want, or who you love. Who wouldn’t want to watch that?

Ilana: The scenario Annie presents is quite enticing. I do somewhat understand the draw of rom-coms and why many find them so engaging. A large majority of movie audiences enjoy watching the characters “embark on the journey” of falling in love and the obstacles and triumphs associated with this journey. If only romantic comedies actually dealt with the underlying stereotypes they present, rather than perpetuating them. They provide false hope and an unrealistic image of what constitutes a relationship. Women are more complex than finding fulfilment only through this type of utopian relationship.

In the movie “Love Actually,” real world issues are glossed over in favor of comedic relief. Yes, I know that comedy is part of the genre, but if a movie presents the topics of female subordination and gender stereotypes, it should try to make a statement about them rather than continuing to fuel them. This can be done without compromising the comedic nature of the movie. Honestly. Rom-coms exploit the very real social injustices and gender inequalities taking place in our world. The fact that they are played off as “light and fun” is the true tragedy of romantic comedies.

I’m not saying that I don’t find some moments touching. Rom-coms are experts at knowing just how to pull on the heartstrings. In “Love Actually,” young Sam (Thomas Brodie-Sangster, “The Maze Runner”) has a refreshingly cute storyline. Unfortunately, his storyline is overshadowed by the other elements of the movie. Early in the film, we are introduced to Colin (Kris Marshall, “Death at a Funeral”). Colin is a sex-crazed young man only interested in a “shag.” He is shown badgering women in the workplace, all of whom refuse to engage with him. He plays this off as a universal problem with English women, and decides to travel to the United States in pursuit of sex, equipped with a suitcase full of condoms. The film ends with Colin returning to Britain with an attractive American woman by his side, a “victor” rewarded for his unacceptable treatment of women. Additionally, three of the relationships highlighted in the film depict a relationship between a dominant man and subordinate woman. Hugh Grant’s (“Four Weddings and a Funeral”) character, David, the Prime Minister of England, asks, “Who do you have to screw around here to get a cup of tea and a chocolate biscuit?” Natalie (Martine McCutcheon, “Jump!”) is a member of the household staff who provides such amenities.

It just so happens that she walks into the room with tea and biscuits directly after David’s derogatory comment. Need I say more?

Annie: I actually think there is a lot more to be said. While Ilana’s argument is valid, I think she is missing the point of a rom-com. The point is to not take yourself too seriously. As we watch the journey, we know that relationships are infinitely more complex and messy, but we all still love wishing that they weren’t.

On the issue of gender inequalities, there are a few things we, as viewers, have to take into account.

First, the majority, if not all, of the cast is British and British humor differs starkly from American humor. Secondly, I do not agree that it is possible to educate the audience on the issues of gender inequality without “compromising the comedic nature of the movie.”

The audience does not watch a rom-com to be educated. If I wanted to learn about a serious issue, I would watch a documentary. Watching a rom-com is supposed to be funny, entertaining and enjoyable. I personally would not enjoy a rom-com that had a running commentary about the importance of the equality of women. Don’t get me wrong, I am a total feminist at heart, but I don’t like having that shoved down my throat when I am just trying to laugh at a funny movie.

Ilana: So what’s the moral of the story?  That love conquers all? If rom-com audiences continue to accept the plot of a dominant man “conquering” a subordinate woman; then yes, I suppose ‘love actually’ conquers all.

Annie: “Love Actually” is funny, sweet, a little crude at times and so very entertaining. It is the quintessential rom-com for the upcoming holiday season. I would encourage you, even if you are like Ilana and not a rom-com fan, to give it a shot. I promise, you might just ‘actually’ love it.