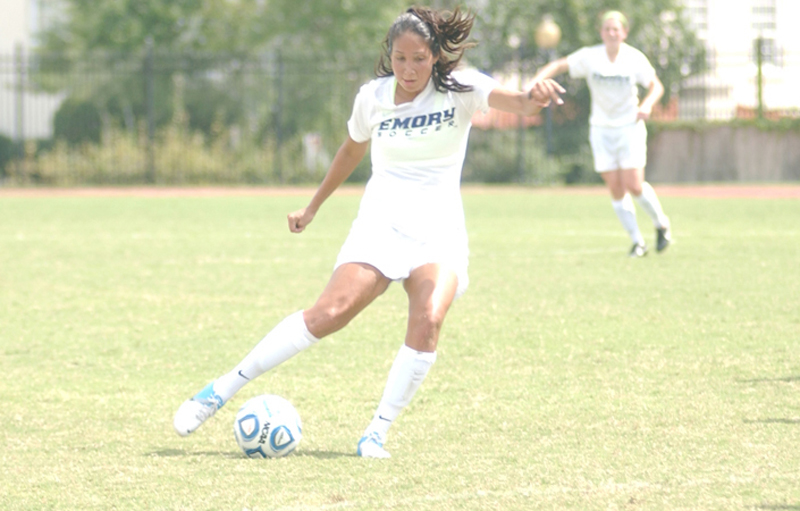 Most future collegiate soccer players spend the summer of their high school sophomore year playing on club teams and going to showcases. Karina Rodriguez, Emory junior, team-leading scorer and two-time athlete of the week this season, spent hers training in Bogota, Colombia and playing for the Colombian Under 17 National team.

As the Emory women’s team finishes the regular season with NCAA tournament aspirations, Rodriguez’s prowess as a forward continues to improve, according to Head Coach Sue Patberg.

Rodriguez’s time in Colombia greatly influenced who she has come to be today. In her two-week camp periods, life entirely revolved around soccer.

“[They] even took away all our electronics so that we would have no distractions,” Rodriguez said. “Being away from home and without technology was really an eye-opener for me and forced me to grow up and become more independent.”

During her junior summer, she played on the Under 20 team until she tore her ACL, an injury that generally takes at least nine months to heal.

Rodriguez recovered, but looking back, she realizes just how stressful the game was in Colombia.

“The soccer and style that was played there was so different than here in America and even brought a little flair to my game,” she said.

Rodriguez didn’t go to Emory her freshman year. She went to the Division I University of North Carolina at Greensboro, where she appeared in every game and had two goals and five assists.

“I loved my team there, but I wasn’t in love with the school,” Rodriguez said. “I thought about if I were to get injured, if I would really be happy there. And that played a part in my decision to transfer.”

Emory had recruited her out of high school and was glad to have her. Patberg still is.

“She’s such a dangerous forward because she has such a great long-range shot,” Patberg said. “She can smack a ball from a distance.”

It wasn’t an easy move for Rodriguez at first.

“The transition was hard at first because it was like starting freshman year all over again,” she said.

Nonetheless, Rodriguez did not falter. Her prior experience balancing soccer and school throughout her life made time management easier.

“At first, it was hard, but once I got into the swing of things, the transition was great, and being on the soccer team also helped a lot,” she said.

The other Eagles immediately embraced their new star. The team has a “Big Sibling, Little Sibling” program and does a lot of team-building activities to help new players get comfortable, both of which Rodriguez praised.

“They were very welcoming and helped me get around the first few days of preseason,” she said of her teammates.

Coincidentally, Rodriguez and current Emory captain Kelly Costopoulos played together in grade school and played against one another in high school in their hometown, Boca Raton, Fla. Costopoulos has nothing but praise for her former rival.

“Karina has been extremely helpful in our attack because she is a dangerous forward with speed and a great shot,” she said.

Rodriguez’s last season was cut short last year due to another torn ACL after playing in 11 games. Nonetheless, she finished with four goals and three assists.

At the start of this season, she was still recovering from her injury, but she has quickly picked the pace back up.

“She had a great attitude, and I never doubted that she would come back strong,” she said. “This year, it’s great to have her back because she is a strong player and a great goal scorer,”

The team is 13-3-1 overall and 5-1 in conference play with only one regular season game left. They will either finish second in the University Athletic Association (UAA) or will finish tied for first with Washington University in St. Louis, the best-ranked Division III team in the country. Due to a win over Emory earlier in the season, Washington University has clinched a spot in the NCAA tournament. Emory does not know yet whether they will be in the tournament, but it is likely, Patberg said.

There is no single Eagle that carries the team. “We have a lot of players who can score,” Patberg said. In the games last Friday and Sunday, a different Emory player scored each of the three goals scored.

The Eagles have been consistently improving as the season has gone on, largely due to the same close-knit qualities that helped Rodriguez get quickly acclimated last year, Patberg said. Their chemistry has grown greatly, and they have gotten better at working together.

“We have some players back who’ve been injured. We’re getting up to speed and playing deep into our roster,” Patberg said.

The team is optimistic about the tournament. “I am confident that we will be mentally prepared because of the experience we’ve gained competing deep in the tournament the past few years,” said Costopoulos.

Patberg agreed, stating simply, “I think we have a very good chance of doing well.”