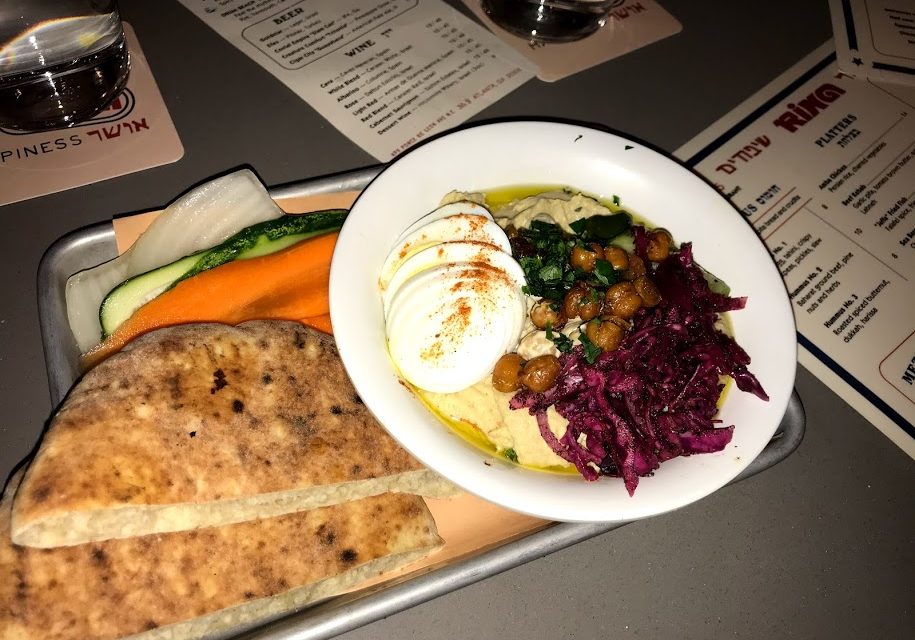 Located at the Ford Factory Lofts building and shopping complex on the Atlanta BeltLine’s Eastside Trail, Middle Eastern restaurant Rina has been bringing Tel Avivian flare to Atlanta since its opening on Jan. 13. Named after the owner’s grandmother, Rina serves traditional Israeli street food with a twist.

My boyfriend had never been to an Israeli restaurant, so I brought him with me to experience the cuisine.

Thankfully, the menu was not overwhelming, concisely sectioned into categories of hummus, platters, “in pita” (pita sandwiches), mezze, sides and shakes.

We simply had to order the hummus. From Rina’s three varieties, we chose Hummus No. 1, which was delicious and creamy. Topped with a sliced hard-boiled egg, crunchy chickpeas, pickles and red cabbage slaw, the dip had an enjoyable, varied texture. The waitress kindly told us that the sides — warm pita bread and thinly sliced carrots, cucumbers and white onion — were unlimited, which made the hummus definitely worth the $8 price tag.

For entrees, she recommended the Jaffa fried fish, a whole fish head fried in falafel spice; the arayas, spicy, minced lamb cooked inside pita; and the beef kebab, currently their most popular dish. I decided to order the arayas.

The arayas were beautifully plated next to three layered sauces and a traditional Israeli salad of chopped cucumbers and tomatoes. Sliced in half, the sandwiches’ crispy pita shell contrasted the succulent lamb filling. Although baked rather than fried, the flavorful meat made the sandwich somewhat greasy — my boyfriend described it as an Israeli empanada — but not so much that it was unpleasant.

On the side, tahini and yogurt were topped with green schug, a Middle Eastern sauce that added heat to the already spicy arayas. Dipping the lamb sandwich into the sauce mixture created the perfect bite. The bright, herb-filled schug added complexity, while the yogurt mitigated spice and grease.

My boyfriend opted for the beef kebab, which arrived served in two garlic pita pockets, garnished with pickled onions and cilantro, and drizzled with a warm, tomato and brown butter sauce. The kebab was covered in this sauce, which was so mouthwatering and savory that we probably would have enjoyed it alone out of a mug. Between all the sauces and juicy meat, we went through quite a few napkins. 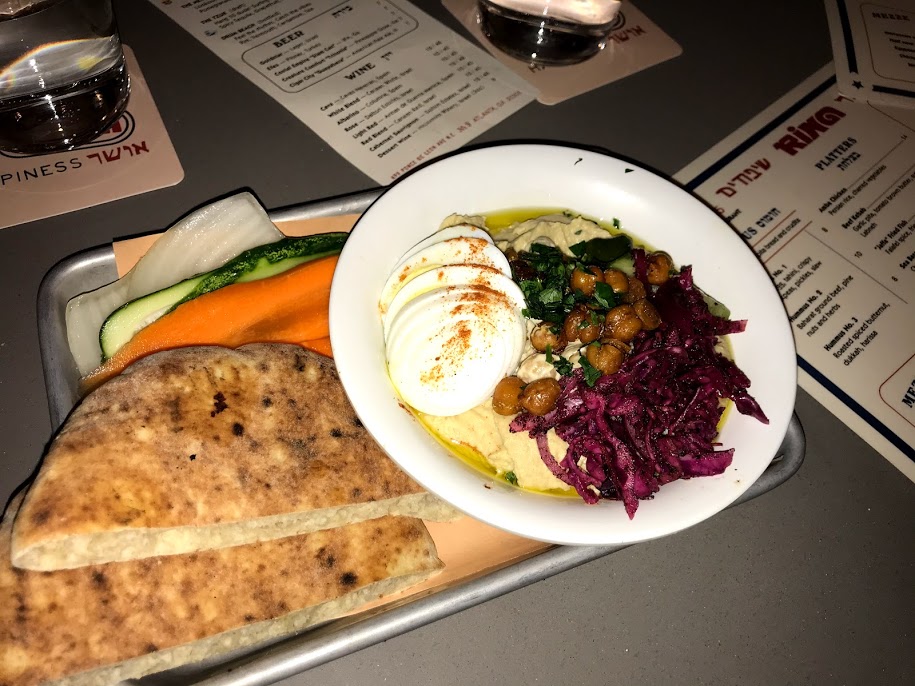 Though we were nearly bursting from the hummus and entrees, we couldn’t resist sharing a tahini chocolate chip cookie for dessert, which proved a good decision. Served in a parchment bag, the cookie had subtle hints of salt and tahini, a crispy exterior, and a gooey chocolate center. Those familiar with halvah, a Middle Eastern confection made from tahini, will recognize a similar nutty flavor profile.

Situated roughly 15 minutes from Emory’s campus, Rina is easily accessible from Ponce City Market, as one of its entrances opens directly onto the BeltLine. Bike racks line the walls outside the restaurant, so if you’re already walking or biking on the Eastside Trail, Rina is a convenient stop for a bite to eat.

Rina has modern four-top and two-top tables and a long, steel-colored bar. Throughout our dinner, eight of the four-top tables remained empty, yet the host sat us at the bar because all of the two-top tables were full when we arrived. With half of the restaurant empty, there was no reason to seat us at the bar. This was an unusual aspect of our experience, perhaps a result of the restaurant’s novelty. Consequently, the bartender was our waitress. She was very friendly and attentive, and all of our food arrived quickly.

The restaurant’s vibe was extremely warm and inviting with vibrant decor and lively Middle Eastern music. The interior was casual and artsy with string lights and colorful banners hanging from the ceiling and a large, black-and-white photograph of beachgoers spanning one wall. Little Hebrew accents decorated the space — the Hebrew word for happiness adorned the entrance wall, the menus and even the coasters. Scattered across the walls were small paintings — abstract portraits painted in red and yellow— that brought quirk to the bright atmosphere.

On top of the $8 hummus, the $16 arayas and $15 beef kebab brought our subtotal to $42 before tax and tip. Although pricier than the street food to which Rina traces its roots, the cost found justification in the high-quality ingredients, superb preparation and sizable portions.

I left Rina both satisfied and hungry for more, and will definitely return to try the falafel, which is a recipe that has  been in the family since the 1950s, and the two shakes (Turkish coffee and tahini, honey, and dates). Rina succeeds by offering both a superb introductory experience for those new to Israeli food and an innovative spin on the cuisine for those who already know and love it. Its convenient location on the BeltLine will have everyone saying “l’chaim!”