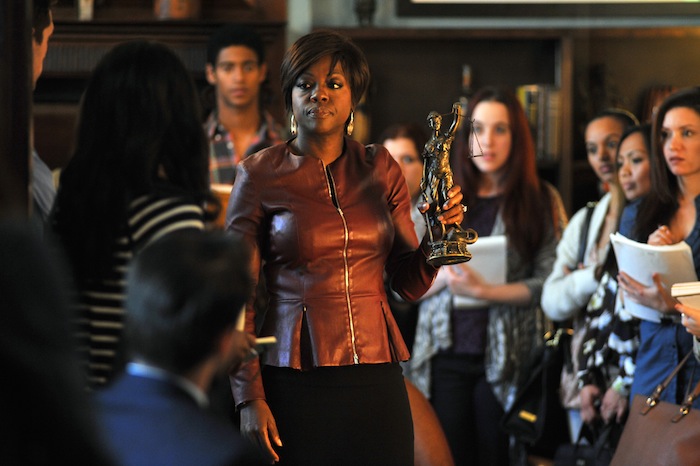 Viola Davis (center) stars as Annalise Keating in ABC’s new legal series “How To Get Away With Murder.” The show is created by Shonda Rhimes of “Scandal” and “Grey’s Anatomy” fame. / Photo courtesy of ABC

With shows like “Grey’s Anatomy” and “Scandal” under your belt, what more can you bring to television? Writing and producing powerhouse Shonda Rhimes answers that question with the mischievous and provocative new show “How To Get Away With Murder.”

Like Rhimes’ other shows, “How To Get Away With Murder” airs on ABC. You can catch the show at 10 p.m. on Wednesday nights.

And if being a die-hard fan of “Grey’s Anatomy” and “Scandal” isn’t reason enough for this show to make your fall schedule, you should watch “How to Get Away With Murder” because unlike all the other law shows on television, it is the perfect balance of gritty, mysterious and intellectual.

This newly aired show follows a select few law students as they navigate the treacherous waters of their Criminal Law 100 class. This class, taught by powerful yet conflicted professor Annalise Keating (played by the ingenious Viola Davis), attempts to teach students not about jurisprudence, but instead how to practice the law.

The show has a character for everyone to love – or hate– depending on your perspective. Keating is a powerful female in a world dominated by men. She doesn’t take no for an answer, and she is willing to do whatever it takes to get her often guilty clients free from murder charges.

Some of Keating’s students also stand out. Awkward and innocent Wes Gibbins, portrayed by Alfred Enoch (Dean Thomas, “Harry Potter”) particularly emerges as a star. Walking into class on the first day as a student admitted off the waitlist, unprepared for class and unknowing of how the system works, Gibbins doesn’t seem like he should be in a criminal law class. Yet, it’s always the quiet ones you have to watch out for because they feel like they have something to prove; and in Gibbins’ case, he does. The more we learn about Gibbins, the more multi-dimensional he becomes.

Another student who seems slightly out of place in the legal world is Laurel Castillo, played by Karla Souza (Jackie, “Instructions Not Included”). Castillo is shy but incredibly smart, and she often comes up with the best ideas for the defense such as admitting to one crime to avoid another.

Unlike the other students, Connor Walsh (Jack Falahee, “Rage”) and Michaela Pratt (Aja Naomi King, “Four”) are daring, bold and outgoing. Walsh is not afraid to mix business with pleasure to get what he wants while Pratt prides herself on being the smartest person in the room. Both of these characters embody the quintessential young and unwaveringly ambitious law student by always being the first to speak up in class in their fruitless attempts to impress the professor.

While the show has extremely interesting characters, the presentation of the narrative, which constantly jumps back and forth between the present and three months in the future, proves difficult to follow. Despite the perplexing nature of this narrative, you get a little bit more information about what is happening in “the future” with each episode.

If you are looking for a unique way to take a break from studying or if you are genuinely curious about criminal law and how you could get away with murder, this show is for you.

After the hour flies by, the ending to the season premiere will leave you full of ideas, still mulling over the issues faced by the students. You won’t be able to sleep because your brain will be too busy developing all the possible theories in your head, just like Keating taught you on the first day of class.