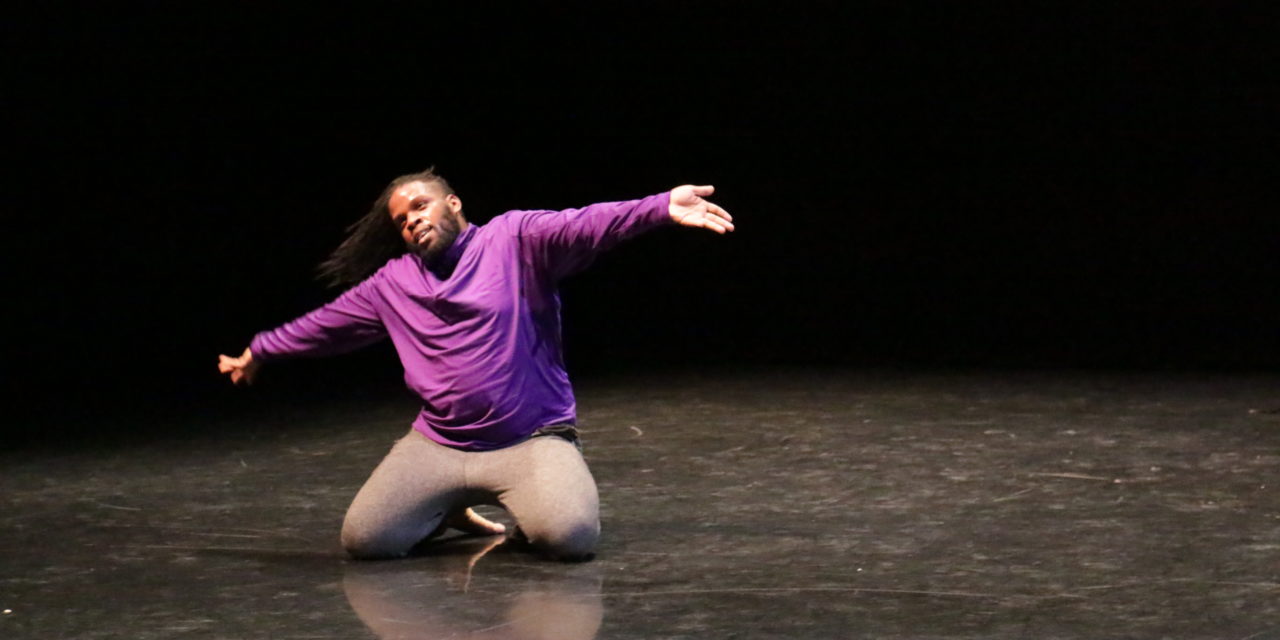 “Just Going Through,” choreographed and performed by Lumpkin, shared the experiences and emotions Lumpkin felt throughout his dance career. He told the audience that the dance symbolizes the intricacies of his journey through life.

“For this piece, it was really important to me to honor my different dance histories and all the different lineages … [and] how I can continue to honor all those complexities inside of myself,” Lumpkin said.

Lumpkin used luggage bags as props during his performance to represent the weight one carries throughout their lives. A variety of genres of music accompanied the dance, which allowed for diverse movements to collectively merge into one performance. Lumpkin is a choreographer, performer and teaching artist who began his dance career at Emory and continued at Florida State University’s School of Dance, where he received a master’s degree in fine arts.

Nagpal, who has performed in the Atlanta area with Bollywood fusion dance group Moksha, co-choreographed and danced in the opening sequence from “Goddess,” a short scene from the titular production performed at Synchronicity Theatre in 2018. Nagpal said that the dance was originally made to be a trio performance portraying different religious figures including the Greek goddess of the wilderness Artemis and the Egyptian goddess of balance and justice Maat.

For her solo take on the production, Nagpal performed the role of Adrestia, the Greek goddess of revolt. Nagpal’s dance style consisted of broad, powerful movements backed with a soundtrack of intense chants and drums. The dance featured her interpretations of warrior dances, which typically feature mock combat as a part of a ritual dance.

“This dance was meant to [represent] … a phase where we were exploring, curious and don’t really understand the consequences of our actions…[this] piece was meant to be who we are as our younger selves,” Nagpal said. 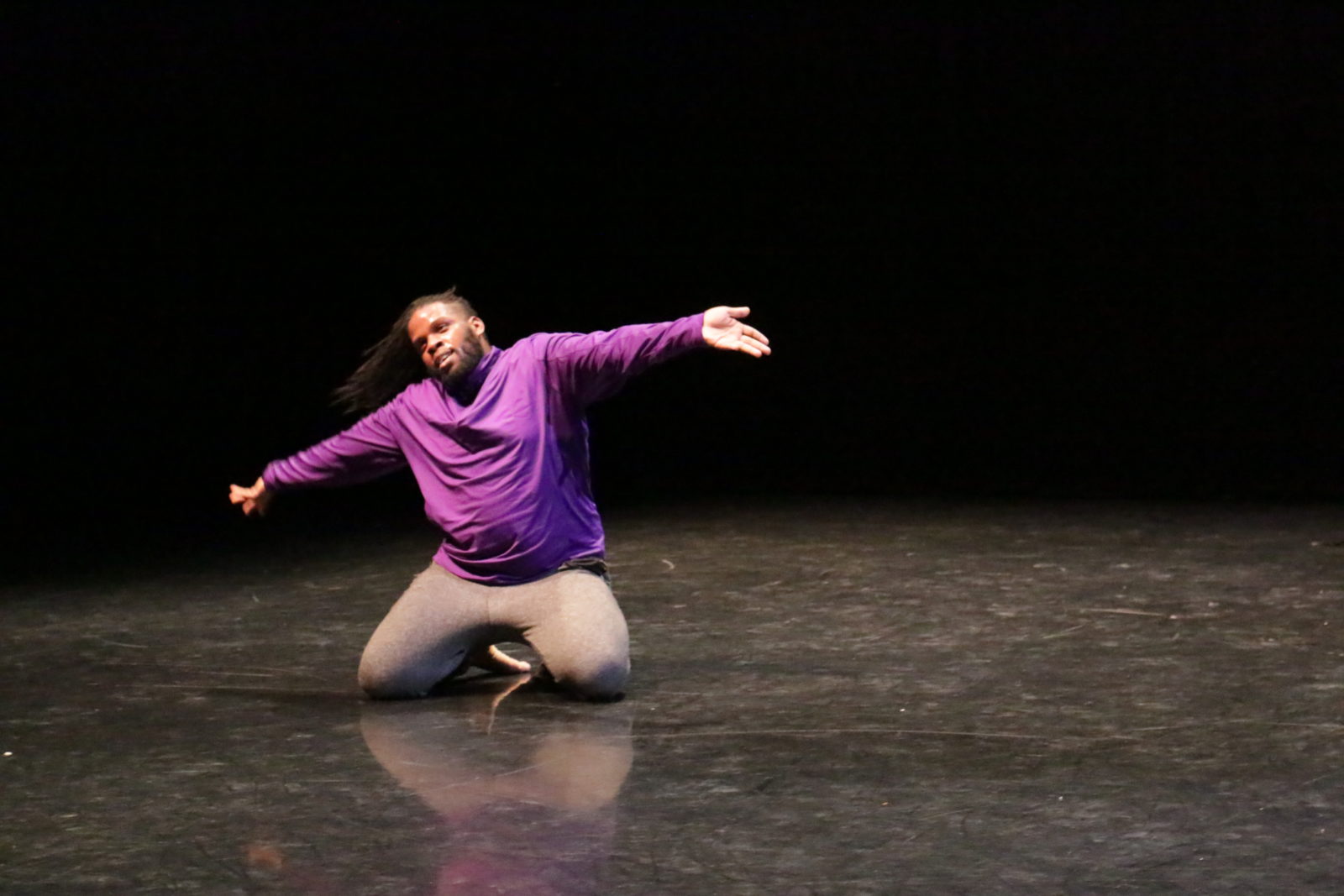 Seven alumni from the Emory Dance and Movement Studies Program returned to campus to showcase their talents at the Schwartz Center for Performing Arts in a full classroom at the Emory Alumni Dance Showcase on Feb. 8./ Eunice Park, Staff

“Behind the glass,” performed by Collins, displayed deep personal emotions between two dancers. She graduated from the Immerse Atlanta artist program which often provides a gateway for Atlanta dancers aiming to pursue a professional career in contemporary dance. In 2018, Collins received the Emory Alan Rackoff Prize, an award that annually recognizes a paper, project or honor’s thesis written through primary source research at the Stuart A. Rose Manuscript, Archives, and Rare Book Library, for her choreographic research.

Throughout the entire performance, the dancers’ movements were dynamic and vigorous. As the dancers rolled and leaped on the stage, their breathing and the sounds of their bodies against the floor soon replaced the actual music. Collins stated that she often journals as part of the evolution process of her work and encourages her dancers to participate in personal writing to express their unique individuality.

“Writing for me is a personal outlet [and] is a practice that is used very often,” Collins said. “I feel like it’s a way for me to connect not only to movement but to … another medium.”

A dancer and choreographer who performs movement research on embodying and magnifying the queer and transgender experiences, Briggs choreographed “Violet Adagio,” a lesbian, feminist and polyamorous interpretation of the “Rose Adagio” from Pyotr Tchaikovsky’s “Sleeping Beauty.” In the original story, Sleeping Beauty dances with four suitors on her 16th birthday and is tasked with selecting only one. Instead of using the original version’s roses gifted to Sleeping Beauty by the suitors, Briggs decided to use vibrators.

“Vibrators are cooler than roses,” Briggs said. “So I made this version.”

During the middle of the performance, all four dancers carried their own vibrators and used the vibrating sounds from the gadgets as the background music. The appearance of the many vibrators in addition to the funny movements served as comic relief, and the audience’s laughter never ceased throughout the entire performance. As an immediate attention grabber, the vibrators exemplified the meaning and creativity of the dance.

Stevenson, who graduated with a bachelor’s in political science and Arabic, choreographed the dance “Person(a).” Stevenson is a choreographer and movement artist who currently works with dance groups “staibdance” and “Core Dance.”

Messina, who will show her full work at a performative series for new artists called Dance Canvas, choreographed excerpts from the dance “thruline.” During her performance, dancers moved simultaneously as a unit until separating into contrasting movements to express individuality. She said the dance demonstrates how “we all experience moments in history differently in the same world.”

The performances revealed the unique emotional and personal struggles and achievements of all the dancers, choreographers and production staff who had carefully considered every last detail surrounding the event: music, clothing, props, story and choreographies. The night ended with a round of applause for Emory’s artists, who showcased diverse, personal and incredible performances.