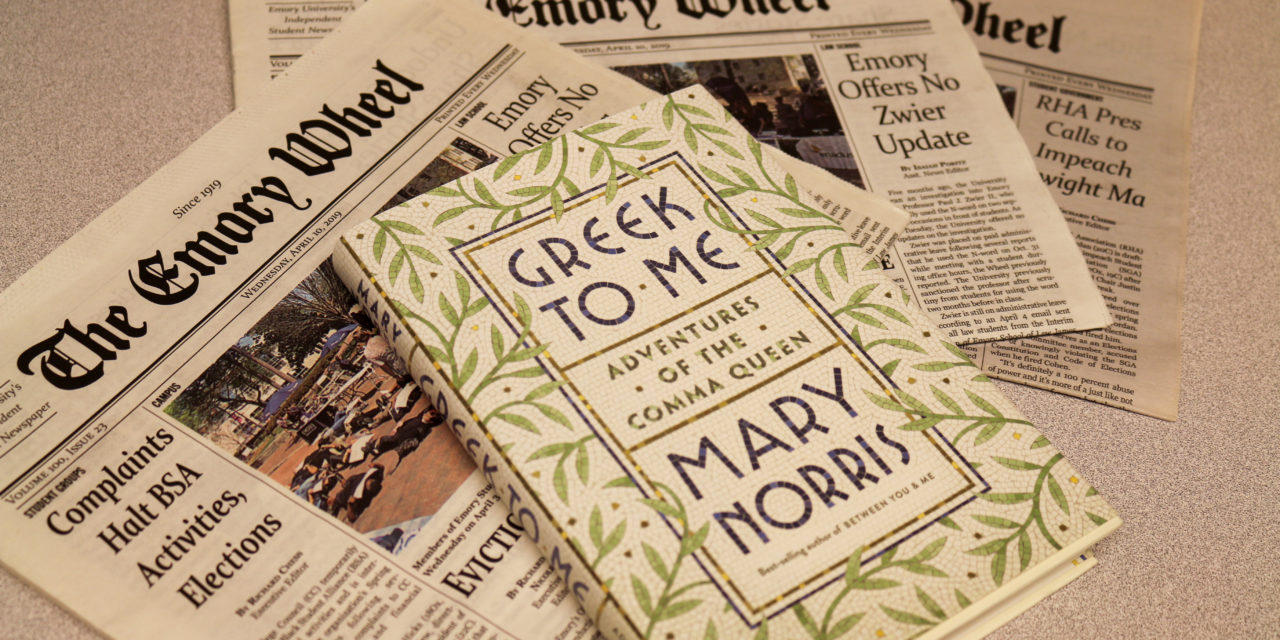 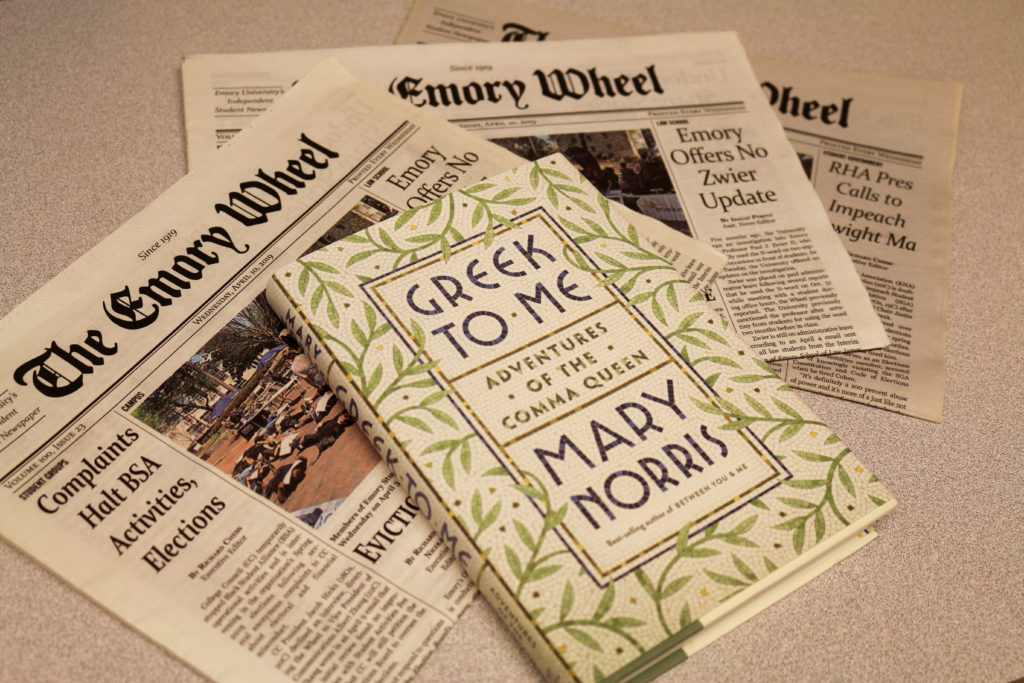 Mary Norris’ “Greek to Me,” was released in April 2019/Isaiah Sirois, Managing Editor

Under a vaulted ceiling, where an ochre cross hung above the well-polished wooden sanctuary, writer and editor Mary Norris joked with her audience about dodging the advances of Cypriot men to skinny-dip in the Baths of Aphrodite.

“This is a church — can I say this?” the witty, now-retired copy editor for The New Yorker had asked, laughing along with the crowd.

The event, part of this year’s Atlanta Journal-Constitution Decatur Book Festival, was sponsored by the Michael C. Carlos Museum. Elizabeth Hornor, director of education at the Carlos, shared the stage with Norris to ask the editor questions about her second book, “Greek to Me: Adventures of the Comma Queen,” released in April.

“Greek to Me” details Norris’ passion for ancient Greece and its intersections with her professional life. She credited her undergraduate experience at Rutgers University for exposing her to ancient Greece, although she did not pursue a degree in Classics.

“My sophomore year, I finished up all my requirements, and I started dabbling,” she said. “That semester, I registered for astronomy, existentialism and mythology.”

Neither astronomy nor existentialism stuck with Norris, but Greek mythology piqued her interest.

After she graduated and started working at The New Yorker, Norris decided to take more classes about Greece. Fortunately, the magazine compensated employees for courses relevant to their professional development. Unfortunately, her executive editor deemed ancient Greek irrelevant to her career.

The copy editor proceeded to jot down all easily misspelled words with ancient Greek roots, like “ophthalmologist,” to prove the language’s usefulness. She compiled such a thorough list, supplemented with letters from other editors, that a friend concluded Norris was “using a cannon to shoot a flea.” Sure enough, the flea was convinced, and Norris could resume studying the classics for free.

“It sounds like a scam, but it did have everything to do with English,” Norris said as the audience laughed.

The editor credited her father for delaying her pursuit of ancient Greek, as he had refused to let her study Latin at her Cleveland high school. Norris did not get another chance to study the dead language until college, and even then, her linguistics professor convinced her to take a living language instead.

A trip to the movies revived Norris’ interest in the ancient world. The Greek backdrop of “Time Bandits,” a 1981 film starring Sean Connery as the mythical King Agamemnon, impressed her so much that she knew she had to visit. She described Greece as “very elemental,” as a clear sky accentuated its rugged landscape. Norris found out later that the film had been shot in Morocco, but she would travel to Greece anyway.

Hornor explained to the Wheel how the Carlos Museum became involved with the event. Decatur Book Fest Program Director Joy Pope had approached Hornor about collaborating to invite Norris, and Hornor agreed.

“One of the things that we really try to do at the Carlos is show the ways in which ancient cultures continue to have resonance for people,” Hornor explained. “There’s nothing new under the sun; every human problem that one can think of was explored by the Greeks.”

For Norris, studying ancient Greece offered therapeutic relief. After her class read “Antigone,” Norris said that she realized its mental health benefits. “Those tragedies were the ancients’ form of therapy,” she told the audience. “They didn’t have psychiatrists, but you could go to the theater and cry.”

After her talk, Norris offered some advice to prospective writers. “My main piece of advice,” she told the Wheel, would be “to seek online work because that’s where the work is going to be.” She encouraged undergraduates to “learn everything [that they] can about the tech stuff, but raise the level of discourse online.”

The world of writing may have changed a lot between Sophocles’ “Antigone” and the invention of the Internet, but the ancients can still be a source of insight and inspiration. It’s easy to forget the Classics at a university like Emory, where business and the sciences seem to overwhelm the humanities. But students should learn from Norris’ example and take a Classics course or drop by the Carlos sometime, even if they have the slightest interest.

Who knows, maybe you’ll even end up skinny-dipping in Cyprus like Norris.

Isaiah Sirois (19C) is from Naples, Fla., majoring in history. He previously served as the Wheel’s managing editor, and the Wheel’s Editorial Board won an SPJ Mark of Excellence Award during his term. He also works on the Wheel’s award-winning crossword team. Outside of the Wheel, he writes and edits for FantasyPros and works for the Atlanta Urban Debate League. He is also a Franklin Junto Fellow in the Program in Democracy and Citizenship and he serves on the executive board of Phi Alpha Theta. Sirois is an avid NASCAR fan and he will be a Team Penske supporter until the end of time.