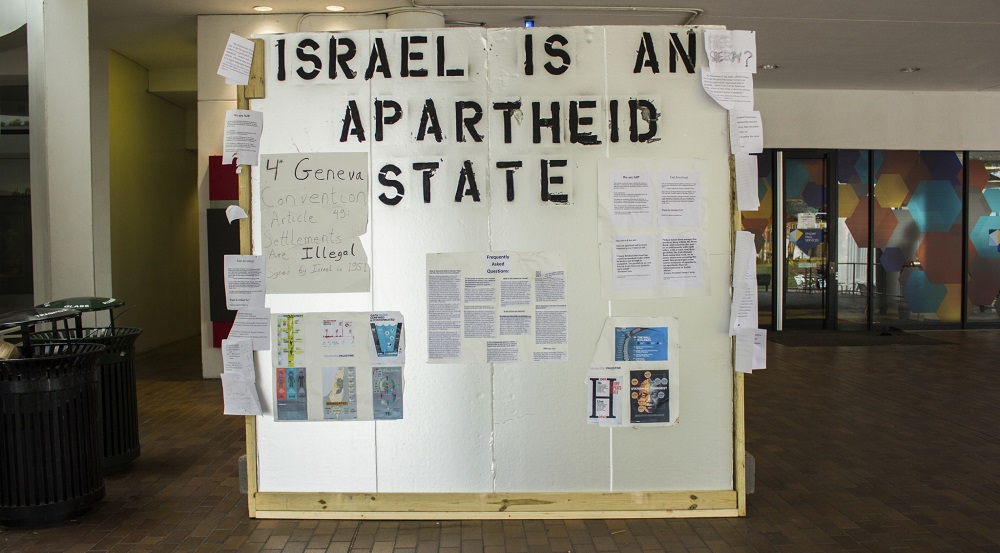 On Feb. 22, when I, along with other members of Emory Students for Justice in Palestine (ESJP) built a mock apartheid wall by the DUC for Israeli Apartheid Week, we were hoping to start a campus conversation about the Israeli occupation of Palestine and what actions we can take as a campus to help bring about a more just situation: one in which all people’s human rights are respected. While some members of the Emory community chose to vandalize the wall almost immediately, others vandalized it again the next day, and some verbally assaulted ESJP members. I am grateful for the many members of our community who chose to respond with counter arguments and/or statements of support rather than acts of destruction; however, I am disappointed by the quality of some of these responses, which seemed to ignore the messages on our wall and were merely knee-jerk reactions to the criticism of Israel, ignoring our evidence and our arguments completely. I want to build upon our previous Wheel Letter to the Editor and respond to some of the critiques and counter-arguments offered to our wall since then. ​

In an op-ed published shortly after our wall was erected and vandalized, College senior Kate Moran mentioned being struck by “the lack of substantive dialogue conducted between student groups.” Since erecting the wall, I too have felt this and been quite disappointed. I had hoped that throughout the week during which the wall was up, people would reach out to me by email (which was on the wall), and I could answer questions, hear their critiques and have a conversation. However, no one chose to reach out this way. I had also hoped that through op-eds or other platforms people would respond to the arguments we made on the wall.

While one person wrote an op-ed about our message, and Hillel erected a “Truth Wall” with a list of what they called “myths” and “facts,” none of this seemed to actually be in response to the content of our message. Rather, they seemed to be responding to the abstract idea of pro-Palestinian arguments. For example, College sophomore Tyler Zelinger wrote an op-ed which claimed that the material on our wall was “specifically focusing on the Israeli military effort in Gaza that took place during the summer of 2014,” and that, “when describing Hamas, ESJP failed to identify it as a terrorist organization.” Yet on the wall, under frequently asked questions, we had the statement, “[S]upporting the Palestinian cause is not the same as supporting Hamas or any group that advocates terror.” Here we clearly connect Hamas with terrorism and distance ourselves from them. While I cannot check precisely what was written on the supplemental materials we stapled to the frame of the wall in response to the vandalism, out of the five posters that constituted the core materials on the wall, the only reference to the summer conflict in Gaza was the statement, “Over the summer Hamas sent rockets into Israel. Israel responded by bombing Gaza and sending troops in,” followed by the death count for Israelis and Palestinians. This was a portion of one paragraph, which hardly constitutes “specifically focusing” on Gaza, yet Zelinger’s op-ed centered around these baseless claims and provided a narrative of the summer conflict slanted in favor of Israel.

Similarly, one of the three “myths” on Hillel’s “Truth Wall” was that Israel commits war crimes. I would urge anyone interested in Israel’s record in Gaza over the summer to read third party reports, such those provided by Amnesty International, for information on human rights abuses and the United Nations Office for the Coordination of Humanitarian Affairs for information on the impact of Israel’s attacks on Gazan civilians. I would also encourage you to note that Israel has repeatedly barred human rights groups such as Amnesty International from entering Gaza during the conflict to monitor the situation for war crimes. While I think it would be worthwhile for us as a campus to look into the history of Gaza and what happens there during both times of intensified violence, such as last summer, and what happens when there is less media focus on Gaza. This topic is ultimately unrelated to the arguments we made on our wall.

Another one of the “Truth Wall’s” three “myths” focuses on the living conditions of Arabs who are Israeli citizens. This is a separate issue from the living conditions of Palestinians who live in the Gaza Strip and the West Bank, where they are denied citizenship and full rights, even though Israel controls their land, and in the case of the West Bank, illegally builds Israeli-only cities and roads on Palestinian land. Our wall was focused on the situation in the West Bank and Gaza and specifically focused on the Separation Barrier which our wall was modeled after.

Only one of the “Truth Wall’s” three points actually deals with the Separation Barrier (often called the “Apartheid Wall”). Given how little of the material on the “Truth Wall” actually related to arguments ESJP was making, and given that our wall was down due to vandalism, I wondered if the people designing the “Truth Wall” had even read the material on our wall. And if they hadn’t read it, then why were they designing a wall in protest against our wall? It felt like they were responding to the very idea of criticizing Israel and to arguments they had heard from pro-Palestinian activists, rather than responding to the actual arguments we were making on campus.

This suspicion was strengthened when I stumbled upon a website which included a long list of “myths” about Israel and arguments for why they were wrong. Two out of the “Truth Wall’s” three “myths” seem to have been copied and pasted from this source (or from another location the “myths” were posted) with only minor revisions (for example: changing “Palestinian” to “Arab”). The third “myth” also borrows material from a “myth” on this website. While I understand the usefulness of reusing resources created by others, doing so without any type of citation and doing so in a way that ignores where the conversation on campus already is, is counter-productive. For us to have a constructive conversation on campus, we must be able to hear each other. If we simply repeat arguments that others have made, without paying attention to where the conversation on campus is, we will make no progress. We must listen to each other’s arguments and respond to them rather than responding to our preconceived notions of what “the other side” is like.

In that spirit, I want to respond to the one “myth” on the “Truth Wall” that related to the Separation Barrier. It claimed that the barrier was not a wall but rather a fence, that it was built in response to terrorist attacks and is ultimately about Israel’s security. I consider the question of whether we call it a fence or a wall to be a semantic distinction that is unimportant compared to the effect of the wall. However, the International Court of Justice, the United Nations’ judicial branch, calls it a wall, so that is the language I will use. Regarding the argument that the wall is justified as a response to terrorist attacks, I would like to make a few points.

Second, the placement of the wall suggests that its purpose was not purely to defend Israeli lives. Eighty-five percent of the wall runs through the West Bank as opposed to running along the border of the West Bank and the State of Israel. In total, the wall separates 9.4 percent of the West Bank from the remainder. If the wall is purely about defending Israelis, then why is it not built on Israeli land, or along the border of the State of Israel and the West Bank? Third, regardless of what seems fair to me or to anyone else at Emory regarding the wall, the International Court of Justice issued a series of near-unanimous rulings in 2004 stating that the wall constitutes a “de facto annexation” of Palestinian land, is illegal under international law, must be dismantled and reparations must be paid to Palestinians whose property and land was seized in the construction of the wall.

We had a summary of this ruling on our mock apartheid wall, and for me, it was one of the most important arguments there, because asking for a well-trained third party to adjudicate is the logical solution to conflicting claims over what is just by the two parties involved. But I have yet to see anyone on campus respond to the International Court of Justice Ruling. So, I ask the Emory Community, and especially groups such as Emory-Israel Public Affairs Committee (EIPAC), Emory Students for Israel (ESI) and Hillel that have chosen to defend Israel, do you believe that Israel is under an obligation to follow international law and the order given by the International Court of Justice and dismantle the separation barrier? If not, then why?

Finally, I would like to respond to an op-ed College junior Leah Michalove wrote shortly after the wall was vandalized. Michalove expressed a fear that neither ESJP nor ESI were willing to talk to each other. As president of ESJP, I would like to say that this is absolutely not the case. I have engaged over the past few weeks in many informal conversations with individuals and groups that disagreed with ESJP’s message, and I think it is essential that we stop talking past each other and come together, explain our different positions and why we care about the situation in Israel-Palestine and work together as a community to decide how to move forward with this dialogue. I am in the process of setting up such an event, in conversation with Emory staff and members of “pro-Israel” groups on campus. We all have a role to play, whether we are directly connected to Israel-Palestine or simply members of the international community and U.S. residents. As Desmond Tutu said, “If you are neutral in situations of injustice, you have chosen the side of the oppressor.” So do not remain silent or neutral. Join us, and help us to move forward as a campus toward a future where both Israelis and Palestinians can have security, peace and their full human rights protected.

Anaïs Hussung is a College sophomore from Jefferson City, Tennessee.