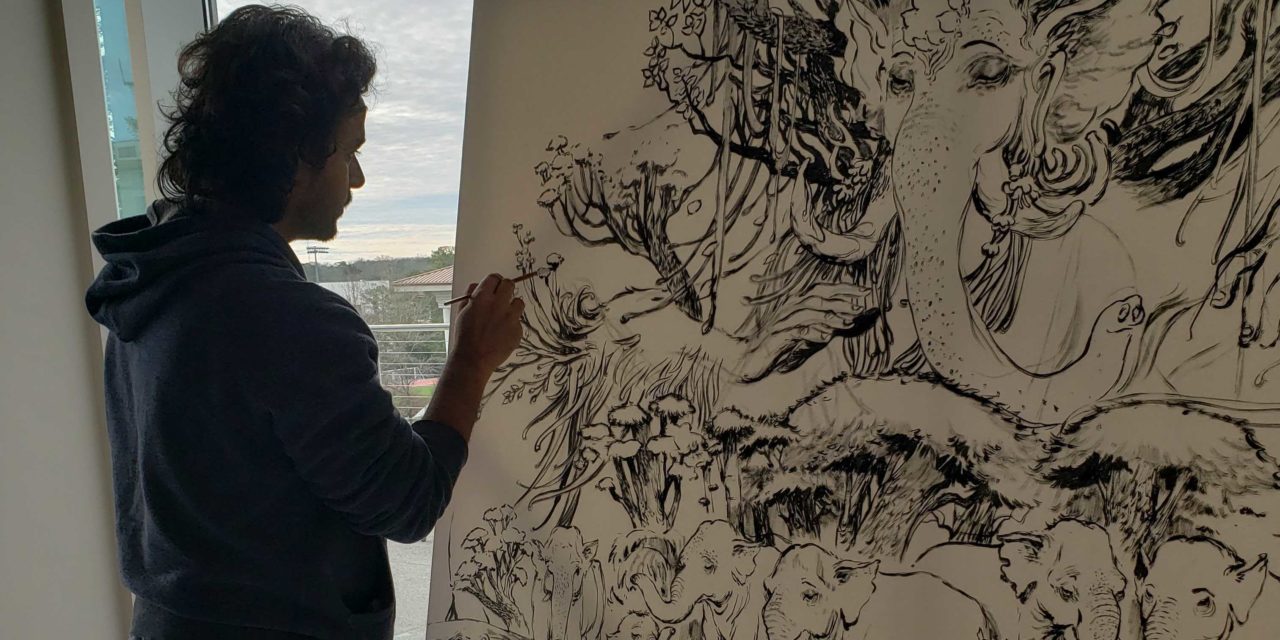 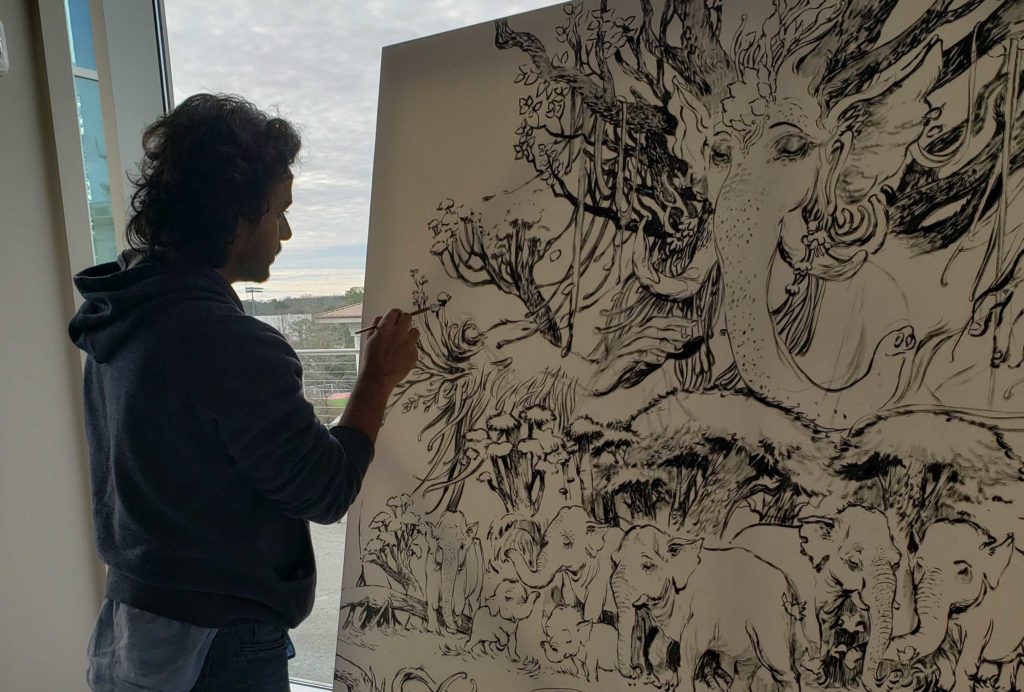 With a brush and a bottle of ink, Abhishek Singh, artist-in-residence at the Michael C. Carlos Museum, bridges Hindu deities with the natural world. As part of his residency, Singh painted the elephant-headed Hindu deity Ganesha, known as the remover of obstacles, in the Emory Student Center (ESC) on Jan. 14 and Jan. 17 from 11 a.m. to 4 p.m. The work is titled “The Rainmaker” because elephants are associated with rain in Hindu lore. Singh has said that the painting acts as a prayer for communities devastated by fires.

Branches, draped with vines and flowers, protrude from Ganesha’s head. Elephants surround the deity, thriving in their natural habitat. The painting is black and white with hues of grey and spans three connected canvases. Singh paints with simple materials — a single brush and a bottle of black ink. Nevertheless, each element contains intricate details that fill up the canvases.

In an interview with the Wheel, Singh described his mind as a “complex layered Photoshop file.” He improvises most of his paintings on the spot, though he keeps in mind a structural intent to ensure an aesthetically pleasing composition. However, he believes the importance of the emotional impact outweighs the technical aspects.

“The most important thing is that whatever you’re drawing and whatever thoughts are coming, you let them breathe,” Singh said, “You align your own self and the brush and the ink and the canvas and the subject matter.”

Singh provided his book, “Namaha – Stories From The Land Of Gods And Goddesses,” and several sketchbooks for audience members to admire alongside the live painting. The book is a collection of short stories inspired by ancient Hindu literature coupled with Singh’s vivid illustrations. Throughout the process, Singh would often pause to speak with audience members that gathered. In particular, he noted cultural differences between India and the United States. He explained that, in Western countries, it is considered more sanitary to dispose a banana peel in a trash can rather than next to a tree. However, the natural cycle of life means a tree would benefit from the banana decomposing.

“A lot of first-world countries are overly sanitized,” Singh said.

The normal bustle of the ESC meant Emory students, professors and more filled the commons as Singh worked. Some observers choose to simply admire the work from afar.

“It looks like the elephant is the source of life,” Youngsun Kim (23G) said, admiring how the deity was so entwined with nature elements.

Elizabeth Hornor, director of education at the Carlos Museum, planned Singh’s residency. She admires his thorough knowledge of and love for the Hindu deities along with his technical artistic abilities.

“He doesn’t want people to just think about Ganesha,” Hornor told the Wheel. “He wants people to think about the actual elephants that are struggling in India because their habitats are being destroyed.”

The Carlos Museum will showcase Singh’s work in the exhibit “Transcendent Deities of India: The Everyday Occurrence of the Divine,” which runs from Jan. 18 through May 17. Admission is free for students.

Angela Tang (22C) is from West Lafayette, Indiana, majoring in economics and mathematics. Outside of the Wheel, she works at the Polaris Spine & Neurosurgery Center, volunteers at the Atlanta Community Food Bank and serves as Emory Miracle’s finance director. She enjoys watching gymnastics, collecting stationery and drinking Blue Donkey’s summer almond blend.