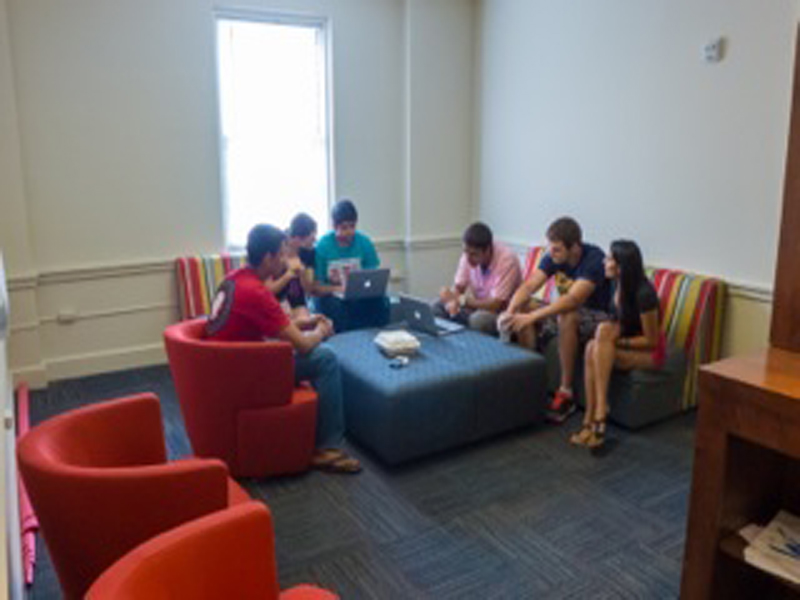 Campus Services has completed summer renovations for three freshman residence halls, including Alabama, Harris and Dobbs, according to Andrea Trinklein, the assistant vice president and executive director of Residence Life and Housing.

Trinklein wrote in an email to the Wheel that Alabama and Harris both went through the first phase of a two-phase renovation, the second of which will occur next summer.

A private bathroom and floor lounge was added to each floor, and the old lounges have been redone.

With new corridor lights, the historic millwork and the open new lounges, Trinklein said the renovations “helped to create a renewed sense of place in historic Harris.”

“I think the living conditions in Harris are very good,” she wrote in an email to the Wheel. “Everything is really new, clean and fresh.”

Trinklein said that lighting issues currently occurring in Harris are due to switches that are unusual and difficult to use.

She added that her team is working with students to explain the switches and explore other options.

Also, a portion of Harris had some hot water issues, which have been identified and isolated. Staff is currently working to fix the problems, Trinklein wrote.

Next summer, Harris’ kitchen will be renovated. Trinklein wrote that the team is looking into working on the exterior entrance, heating ventilation and air-conditioning system.

Alabama Hall
Alabama has a new roof and new exterior of the building including new gutters and a cleaned veneer.

In the second phase of Alabama’s renovations next summer, the changes will focus on the interior of the building.

Trinklein wrote that the team is exploring the idea of adding an elevator.

“Upgrades and enhancements are planned on a regular basis to all buildings,” she said. Also, she said students change their needs over time and types of furniture, design and water fixtures can easily be incorporated into renovations.

Dobbs Hall
The patio of Dobbs Hall was redesigned to create more space for student gathering, Trinklein wrote. She added that last year’s feedback indicated students were not pleased with the front of the building.

In contrast, College senior and Dobbs Resident Advisor Henry Yelin said he does not think the changes were necessary.

“I think the changes improved the entranceway to Dobbs Hall exclusively in an aesthetic manner,” he wrote in an email to the Wheel. “There is no more functionality gained in this design. The old design, with benches, was better because the benches were far more comfortable than the new stone embankments.”