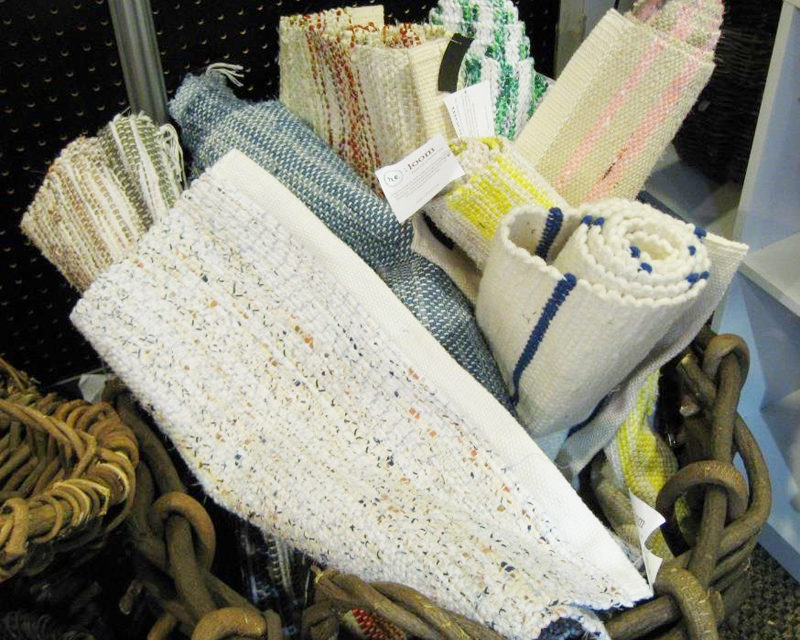 Sustainability is as simple as saving the environment, right?

Sustainability isn’t so simple. Aside from environmental issues, sustainability also addresses economic and social factors. Known as the triple bottom line of sustainability, this principle is one that Emory University holds dear in her ultimate goal to promote sustainability on campus.

Recently, the University has partnered with local non-profit Initiative for Affordable Housing’s latest project, re:loom. While Affordable Housing works with low income and homeless individuals to provide housing and social programs, re:loom focuses on providing them with vocational training.

Developed recently by Executive Director Lisa Wise, re:loom upcycles old textiles (like t-shirts and clothing) and plastics (including bags, trash bags and table cloths) into a variety of items.

Using old-fashioned looms, the materials are cut into one inch strips and then woven into useful items such as doormats, rugs, scarves and more. In doing this, re:loom hopes to empower their workers. The organization aims to provide all participants with a vocation, soft skills (for example, work ethic) and a source of income so they can contribute to sustaining not only the environment but also themselves and their families.

Emory’s partnership started when the Director of Sustainability Initiatives Ciannat Howett learned about re:loom through her position as chair of the board of Sustainable Atlanta, which is a group of organizations promoting sustainability throughout the metro area. She and Deena Keeler, the head of Emory Recycles, joined forces, and ultimately, Emory was able to donate 300 pounds of outdated athletic uniforms and 100 pounds of dated custodial uniforms for re:loom to use in their weaving.

Emory was originally unable to donate these items to charities like the Salvation Army or Goodwill, as they had Emory’s brand name and/or names on them.

The organization is so revolutionary on campus because items that would normally be put in a landfill are being used to empower and employ homeless or recently homeless people. The initiative is helping to work toward reducing Emory’s carbon footprint. Emory University, as a whole, has a waste divergent goal of reducing waste by 65 percent by 2015.

In addition, re:loom’s actions and Emory’s subsequent support provide jobs for people who have a hard time finding employment. By providing them with materials to practice their vocation, Emory is supporting their income and state of living.

“Emory is concerned about the larger community,” Wise said. “They are in a perfect condition to make a difference and they do just that.”
Aside from benefiting the re:loom community, Emory’s partnership also has boundless opportunities for Emory’s students, explained Emily Cumbie-Drake, Sustainability Programs Coordinator.

Emory’s sustainability office has recently involved Volunteer Emory with re:loom initiative. They are in the process of organizing weekly service trips to the non-profit.

Cumbie-Drake expressed hope that this could pave the way for larger service programs and also lead to purchases and support of re:loom’s products.

Wise hopes to continue re:loom’s partnership with Emory through further donations, a stall in the Dobbs University Center as an additional sales output and continued support from the Emory community through volunteers and interns.

“This provides an avenue for Emory students to be connected to the greater Atlanta community,” Cumbie-Drake said. “It’s important for students to understand the issues our community faces and what people are doing to overcome those issues.”