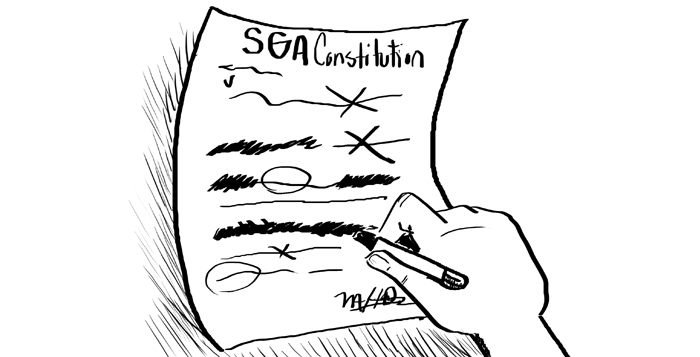 For the first time in at least three years, Emory will have a referendum on the spring ballot. If you’re surprised, it’s entirely understandable. There’s been little to no dissemination of this fact among the student body.

The referendum itself is on a series of about eight changes to the Student Government Association (SGA) Constitution, which serves as the highest set of rules for university-wide student governance. These changes total to about 18-pages of text, very few of which, if any, you’ll see on the actual ballot. Don’t be misled: the referendum question – unless it describes all eight changes in detail – will do little to explain the actual issues you’ll be voting on. Specifically, the amendments change everything from the opening clauses, to the way future constitutional amendments are passed, to the structure of the Constitutional Council (essentially our student Supreme Court).

When I contacted the Constitutional Council about the legality and fairness of shoving multiple rule changes on different subjects into a single referendum, I was turned away.

In sum, they said that however the SGA decides to run the election is how it’ll be run. Without any limits, it’s clear the SGA could phrase the referendum in such a way as to slant it towards a positive appearance. Anyone who’s taken a statistics class can understand the common sense issue when those who want a vote to pass are allowed to formulate the question. This is especially problematic here, where the Council has refused to even pass judgment on the referendum’s appropriateness.

Regardless of whether the changes are themselves good ideas, the student body should never set a precedent that running this type of referendum is okay.

There’s a reason many states have what’s called a “one-subject” rule for ballot initiatives. What are you to do if you like one of the two proposals up for a vote but not the other? Most people will swallow the poison pill and just say “yes,” allowing the government to ram through changes. Most people either won’t know about or (more pertinent here) won’t balance against the amendments they do like. Students must hold their representatives accountable. In this context, that means saying “no” to any and all proposals given to the electorate that’s presented in this “take it or leave it” manner.

But let’s say that’s not enough for you. Is there anything actually bad about the proposed changes? Absolutely.

The most significant alterations are ones that reshape both the principles behind the Student Constitution and the future mechanism for amending it. The first unravels the entire foundation of student governance, while the latter allows whatever’s left to be relentlessly restricted.

Let’s start with the former. This amendment alters the ‘derivation of authority’ section in the opening part of the SGA Constitution. In layman’s terms, this sets the groundwork for the operative provisions of the document. It explains how the SGA actually has power to do, well, anything. Currently, it says that the SGA operates “by and on behalf of the student body of Emory University.”

The proposed amendment would completely alter that arrangement by explaining that power is vested in the SGA on account of historical support by the Board of Trustees and the University Senate. While seemingly innocuous, this change reshapes the entire framework of student governance. Instead of deriving power from the interests of students – something independent of the administration and faculty – this sets up the SGA as just another branch of the university structure along with the Faculty Council. Even if you could argue that this would give legitimacy to the SGA (something I think is more dependent on the actions of our leaders than on the institutional makeup of the organization), this first change would remove from our central document the idea that students are at the forefront of our representative structure.

If that wasn’t enough, the second amendment goes further. If passed, it would necessitate University Senate approval for any future constitutional amendments. In a substantive sense, this gives faculty and the administration a veto over our internal reforms. Even more, combined with the first change, the University Senate would be able to prevent their own removal from our processes. This is not only a dangerous precedent to set, but a significant alteration to our Constitution that we should be able to vote on separately.

Now, I can’t deny that there are other interpretations of these two changes. I certainly don’t believe the entire SGA Legislature wants administration to control over student government. But, if this very reasonable reading of these changes can be done from my vantage point, what is to prevent a less friendly administration from pushing it a step further?

At the very least, the student body deserves a chance for a full and vigorous debate on these proposals.

It’s not only bad policy for us to be forced to vote on these in a single ‘all-or-nothing’ manner; it’s bad for democracy.