Reduce the Number of Replay Reviews 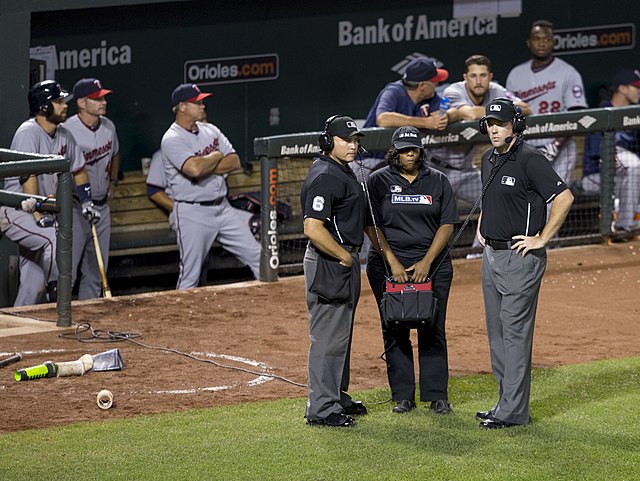 The Philadelphia Phillies defeated the Atlanta Braves 7-6 on April 11 after a highly controversial late game call. In the top of the ninth inning, with the score tied at six, Phillies third baseman Alec Bohm tagged up from third base on a fly ball to left field and was initially called safe by the home plate umpire after he appeared to slide into home before the tag. Immediately, the Braves challenged the call, meaning the Replay Operations Center in New York — composed of full-time MLB umpires — would watch the play and decide whether to uphold or reverse the call on the field.

Upon footage from various camera angles, Bohm’s foot clearly never touched home plate. After deliberating, the Replay Operations Center still decided to uphold the original call, stating after the game that they “could not definitively determine that the runner failed to touch home plate prior to the fielder applying the tag.”

The controversial decision incited frustration about replay review from not only Braves’ players and fans but also other stars around the MLB. Los Angeles Dodgers third baseman Justin Turner tweeted his bitterness toward replay’s ineffectiveness displayed in the Braves game.

Absolutely brutal, saw two angles that were clear he never touched the plate and we get a call stands? I’m with everyone else, what’s the point of replay? https://t.co/4F1bZAzNCX

Turner posed an interesting question, one that is at the heart of refereeing sports in a world of slow motion video: what is the point of replay?

Some may argue that the Braves’ situation calls for an expansion of replay, including more camera angles and umpires to ensure more accurate calls. However, baseball and sports in general must reduce the number of replay reviews so that only the most questionable and egregious calls are reviewed.

Baseball is certainly not the only sport that relies on replay. In fact, when the MLB first implemented it in 2008 to review home run calls, the league was one of the last major sports to do so. The NFL first approved replay for use in the regular season in 1986, followed by the NHL, which implemented it in 1991. The NBA joined in 11 years later when it instituted replay in 2002 to review last-second shots.

Although each sport uses replay, they do so differently. The NHL delegates all reviews to the Situation Room, a space located at their headquarters where league personnel determine if goals are legal and whether on-ice calls should be upheld or reversed. In the NFL, coaches begin each game with two challenges and have the possibility of a third if their first two challenges are successful. Even some professional soccer leagues such as the MLS, Premier League and Champions League implement replay review using a video assistant referee (VAR) system, which includes an official who scrutinizes all scoring plays and penalties.

Despite each leagues’ emphasis on review and producing accurate calls, referees still make objectively wrong calls. People who vouch for expanded replay review must understand that while there may be more angles to make calls clearer, humans are still interpreting the footage and there will still be human error, as seen in the Braves game. Even with more camera angles, there will be plays that video will be unable to definitively get right.

Regardless of these shortcomings, though, replay review has reversed mistakes made on the field. Unfortunately, fewer officiating errors do not always enhance the quality of each game or match. Instead, long official reviews can take away momentum from players and coaches and excitement from fans.

This happened at a Premier League match between Manchester United and Tottenham Hotspur on April 11. Just over 30 minutes into the game, Manchester United striker Edinson Cavani appeared to break a scoreless game with a goal. However, when the referee consulted with the VAR team, a foul was awarded to Cavani’s teammate, nullifying the goal. Like the Braves call, this decision was highly controversial and caused many players and fans to take to social media to voice not only their anger towards incorrect VAR calls but also how they take away from the game’s excitement.

Excessive reviews are also not in the best spirit of the game. In the MLB, one such instance occurred in Game 4 of the 2015 American League Division Series between the Kansas City Royals and Houston Astros. When Royals pinch-runner Terrance Gore stole third base, he clearly beat the tag and the umpire initially called him safe. However, when the Astros challenged the play and replay officials looked at the footage pixel-by-pixel, the replay team saw Gore’s foot pop off the base for a millisecond, resulting in an out. Undoubtedly, there have been baserunners like Gore in the past who were not called out because there was no review. Certainly, obsessing over every little detail was not the MLB’s intent when they implemented replay review.

Yet some may argue that reviewing plays and making correct calls is worth the inconvenience and loss of excitement because it is fair. It is true that making accurate calls enhances the integrity of the game, but it would be unrealistic for referees to review every play throughout the course of the game to ensure a completely accurate game. In reality, situationally important calls are more likely to get reviewed.

Take basketball, for example. The majority of replay reviews come in the final minutes before halftime and at the end of the game. During this time period, officials can go to the monitor to review a host of uncertainties without first being asked by one of the coaches. In the NFL, coaches are not even allowed to challenge a call in the last two minutes of each half because calls are automatically reviewed by the booth.

How is it fair, then, that a play that occurred with one minute left in the game is reviewed but not if it happened at the start of the game? It does not matter if a player scores two points at the beginning of the game or at the end — it is still two points. By reviewing plays towards the end of games more than plays at other times in the game, replay review is intrinsically unfair because it values some plays more than others even though no one play is worth more than another.

For those fans who are still open to reviewing every single play in a game, be prepared for a long, choppy and boring game. NBA Commissioner Adam Silver understands that integrity is important, yet even he knows it is unrealistic to mull over every call.

“On one hand, you’d like to get every call right if you can review it on replay,” said Silver in a 2014 interview with NBA.com. “But if we were to do that, it would probably lead to a five-hour game. And that’s balanced against the ebb-and-flow of keeping it an entertaining product.”

Ultimately, replay should be saved for only the most egregious of calls. Professional leagues must adopt a replay review system where referees look at a replay for 20 seconds and if they cannot definitively say the original call is wrong, then they stick with the call on the field. In doing so, leagues will be able to increase accuracy and fairness without dramatically disrupting the flow of the game. Each aspect of the game is equally important and should be treated as such.

Replay review is a controversial topic across many sports. The use of review in the Braves-Phillies game on April 11 sparked more debate. (Wikimedia Commons/Keith Allison)