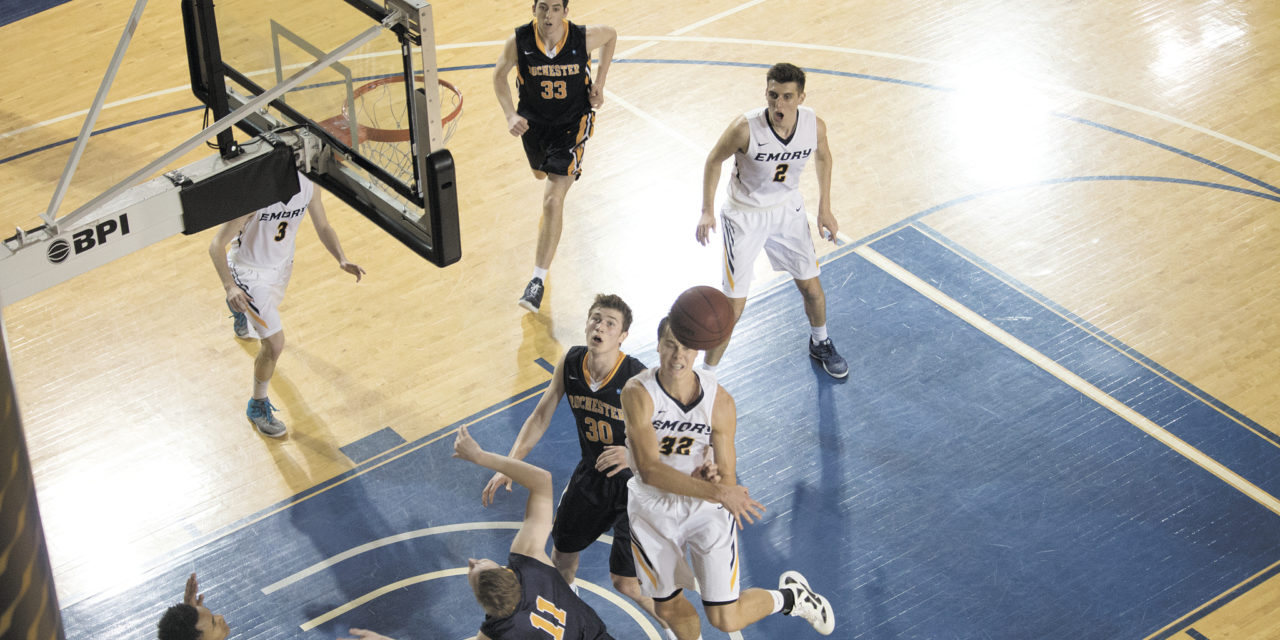 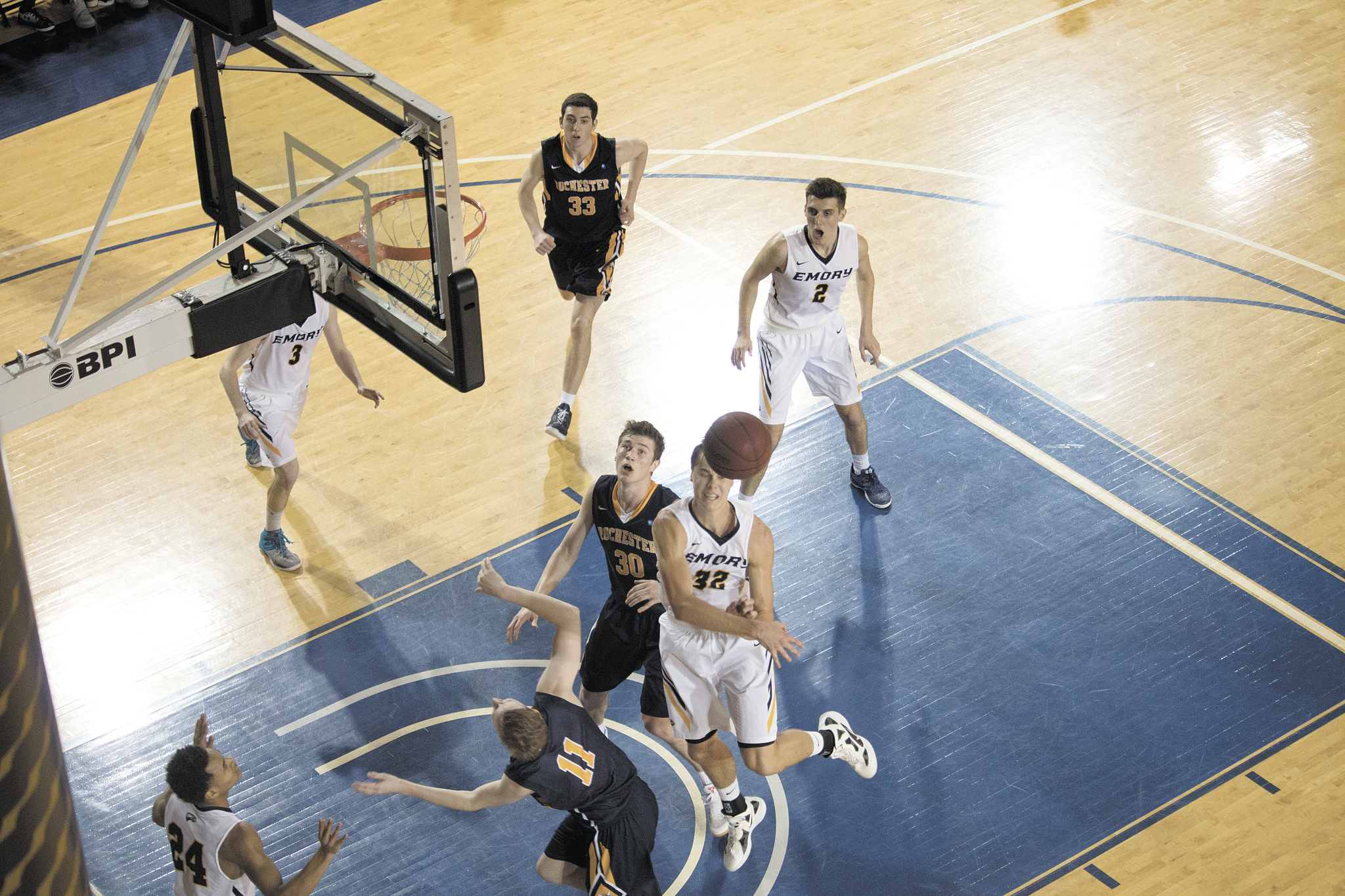 Saturday’s home win against the Yellowjackets of Rochester University (N.Y.) provided the exclamation point on the end of a four game win streak to close out the regular season. The Eagles took down the No. 2 team in the UAA and honored the accomplishments of four senior athletes. Emory finished No. 3 in the UAA (9-5) with an 18-7 overall record and received a bid to  compete in the NCAA D-III men’s basketball tournament next weekend.

Prior to the game, Emory’s four seniors took the floor in recognition of their accomplishments and contributions to the basketball program. The seniors, guard Jonathan Coles, forward Austin DaGue, forward Jim Gordon and guard Jonathan Terry, helped the Eagles to 79 wins, two UAA titles, two Sweet 16s and an Elite Eight since the start of their freshman season in the Fall of 2013.

The seniors and junior forward Adam Gigax started the game. Whether it was due to the jitters from the senior celebration or the intensity of each team’s defense, turnovers plagued both teams early on. After the first 10 minutes of play, the two teams combined for only 20 points.

Coles acknowledged that playing on senior day brings its own unique challenges.

“You try not to think about it too much and try to treat it like any other game, but obviously this is the last time that we are going to play here, so it has a little bit of a different feel,” Coles said.

The Eagles were the first to strike. Gordon, DaGue and junior forward Donald Avant helped the team to a 20-11 lead with five minutes left to play in the first. However, this brought the Yellowjacket offense to life and they poured in 20 points during the final five minutes of the half to give Rochester a slim 31-30 lead.

The game assumed a more consistent rhythm in the second half; the rust from the first disappeared as each team embraced the flow of the game.

The biggest change in the second was the Eagles’ attention to post play. After an easy feed from sophomore guard Gebereal Baitey to DaGue resulted in a lay-in at the rim, the Eagles continued to feed DaGue down low. With junior forward Christopher Avant out with an injury, DaGue proved to be a critical asset, finishing with 22 points and six rebounds on 70 percent shooting from the field.

“DaGue had one of the best games of his career,” Head Coach Jason Zimmerman said. “He has been playing better and better the past two weeks and he was really special today.”

Neither team shot particularly well (35 percent for Rochester and 36 percent for Emory), resulting in a physical, low scoring affair. A three from Rochester senior guard Sam Borst-Smith gave the Yellowjackets their largest lead of the game at 54-48 with just under nine minutes to play; however, the Eagles closed the gap thanks to five straight points from DaGue.

Tied at 60 with 90 seconds remaining, junior guard Whit Rapp drained a clutch three that gave the Eagles a 63-60 advantage. The Yellowjackets quickly answered, cutting the lead to one. After an Emory miss on the following possession, Rochester had an opportunity to take the lead.

One name that was not mentioned often at the scorer’s table Saturday was that of Gigax, who had one of his worst outings of the season. The UAA leader in points per game, Gigax provided only two points Friday night. However, in a play that would determine the outcome of the game, Gigax came up with a critical defensive stop.

Receiving a pass on a strong cut to the rim, Rochester sophomore forward Andrew Lundstrom seemed to have a clear path to the rim and an easy lay-in that likely would have won the game for the Yellowjackets. However, the junior recovered to stuff Lundstrom at the rim, denying Rochester the lead and ultimately securing a 63-62 victory for Emory.

“[Playing on senior day] motivated us more, got us riled up,” Terry said. “This was our last time at home for sure, so we wanted to go out and make the best of it. We had a really good crowd here and that gave us a lot of energy.”

After the game, Zimmerman was pleased that the seniors could savor one final home victory.

“I’m really happy for the seniors to win their last game at home,” Zimmerman said. “Hopefully we get to keep playing.”