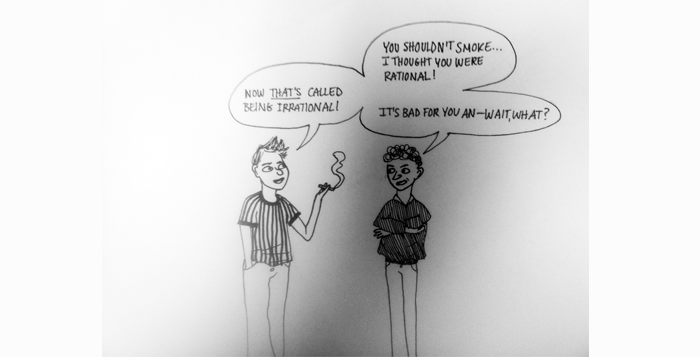 Rationality is a flexible term. We all have some idea about what it means to be rational, but the definition varies from person to person. Overall, it is a conservative measure with utilitarian undertones. Thinking rationally entails carefully weighing the different potential outcomes of one’s decisions and choosing the option that will be most beneficial, or least harmful, for as many people as possible, assuming that selfishness and rationality are mutually exclusive.

We expect others to always be rational. It is our great expectation, a deviation from the Golden Rule which tells us to treat others the way we wish to be treated.

To be a critic of others’ irrational behavior is no difficult task. Rarely, however, do we critique our own irrationality. Whether it is because we are our own best friends or our own worst enemies, we give ourselves a free pass.

Cigarette-smoking is a great example of this strange fallacy. People do not smoke cigarettes against their will. They do it by choice, despite the fact that it is casual masochism or at the very least a form of inadvertent and prolonged self-destruction. Smoking is now widely recognized as a leading factor behind heart disease, cancer, chronic lower respiratory diseases and strokes, the top four causes of death among Americans. Thus, smoking cigarettes is plainly irrational, and to scorn a smoker is to voice one’s own golden expectation.

Yet when we are called out for disappointing this expectation, we deploy rationalization as a defense mechanism. We rationalize as a substitute for behaving rationally. Our excuses for smoking cigarettes vary from “I’ll quit in a couple months” to “I do it to calm my nerves.” In crafting these excuses, we practice the art of self-deception. We demonstrate an understanding of the importance of behaving rationally, but we do not make it much further. Even the best excuse is merely a shortcut out of a momentarily troubled conscience. To rationalize is to sugarcoat irrational behavior for an audience that expects the opposite.

We rationalize to justify laziness, incompetence, disappointment, self-medication and countless other by-products of our free will. Despite the hypocrisy of our judgments, the solution is not for all of us to suddenly and collectively behave rationally.

Rationalization is a natural instinct, a defense mechanism, and to abandon it would be to declaw the mountain lion, so to speak, or to place the orca behind glass, if you prefer. A completely rational being would be incapable of acting upon emotion. That means no cheering, no sobbing and no loving.

Think about it: only in the field of economics, for some bizarre reason, is it assumed that all beings are rational. If such were to be the reality of things, then those simplified models of supply and demand would actually be accurate. I don’t know about you, but for me that would be a reality both demeaning and terrifying, a reality suitable only for an automaton with no self-concept or free will.

He who shaves against the grain in the name of smooth skin is doomed to riddle his face with cuts. Likewise, if everybody tried to be always rational so that they did not feel like hypocrites upon judging the irrationality of others, a number of potential side-effects could be anticipated.

For one, we could expect the average human’s stress load to at least double under the weight of having to continually check one’s behavior. Abandoning an evolutionary instinct like rationalization is not a feasible goal; to do so would be as irrational as smoking cigarettes.

Since we are stuck with this instinct, it would be in the interest of humanity as a whole for each of us to hone our craft, that is, to learn how to rationalize in a rational way, as paradoxical as that might sound. We need not waste rationalization in defense of our irrational behavior, for doing so would be using one human instinct to justify another. Everybody behaves irrationally, yet nobody is completely irrational. Rationalization may not be as virtuous as rationality in the eyes of the beholder, but we might as well reconcile it because we will never rid ourselves of it.