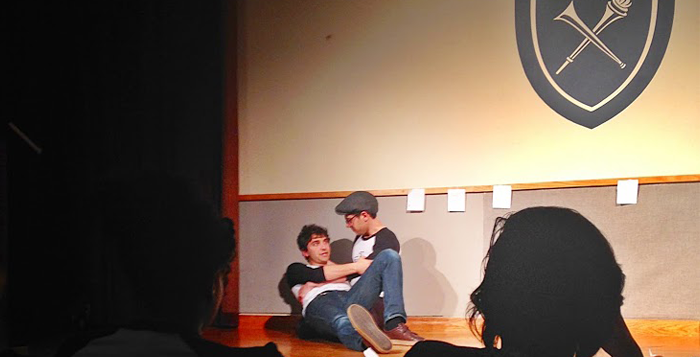 It’s the Sunday night before April Fools’ Day, and loud laughter is coming from the Harland Cinema. A peek inside will unveil the image of a room filled with amused spectators. The joy is caused by none other than the only improvisation (improv) comedy group at Emory, Rathskellar.

Rathskellar is the oldest college comedy troupe in the nation, dating back to 1974. The troupe’s name is German for “basement” and refers to the place where the old group used to practice. The group started out with sketch comedy and then progressively made the transition to improv.

“It’s a wonderful, nerve-wracking performing act,” said College junior and Rathskellar “Emperor” Josh “I Want My Mommy” Jacobs. “It’s all about support and trust. You are not alone on the stage because you have your scene partner. It is great group work.”

The number one rule of improv is “Yes, and.” Whatever one member does, the paramount responsibility of the partner is to follow up with the concept of “Yes, and.” The partner is supposed to support and then build on what he has been given.

However, Rathskellar is completely dependent on the audience. They practice the elements of improv, but they cannot control the audience, who represents the element of surprise. The audience responses range from words like “tuna” to “ballerina” and “celery.”  Even more, the group also engages the audience by inviting people on the stage.

“The audience loves one of their own; they want them to succeed,” Jacobs said. “We also have singing, musical games and a musical improviser. We try to make it interesting.”

Although improv seems to be born at the mercy of creative, comical inspiration, this style has an underlying structure.

The show always starts with an opening gag. For their Valentine’s Day show, for example, the members were sitting down, dispersed in the audience. Suddenly, the melodramatic song “All By Myself” started playing, and they dramatically got up and went on the scene. The group usually comes up with an idea for the gag about an hour before the show, thus displaying true spontaneity.

The show comes in two main formats: the short form scenes and the long form scenes.

The short form is based on the show “Whose Line Is It Anyway?” During the group’s April Fools’ show, the members played New Choice and Death Box, the latter featuring four different members of the team with four different scenes and four different public suggestions. Jacobs calls the Death Box game a “play of attention.”

The long form, on the other hand, is an improvised play without a script which tends to last 10 to 15 minutes. It features the same elements found in the short form, but it is lengthier and requires more skill.

“I like it because it’s harder and it represents the final level that we always strive to reach,” Jacobs said.

Rathskellar is featured at different events in and out of campus. The members performed for kindergartens and also for Toastmasters, a nonprofit group that teaches communication and public speaking skills. They also went to the Children’s Hospital and participated in the Make-A-Wish program, in which a child with a life-threatening disease is granted a wish. One of the children pointed to his desire for comic relief, so the group gladly helped out and endowed him with hearty entertainment.

Improv seems to tie to life intimately since its rules are part of life etiquette. The secret lies in listening, according to Jacobs.

“A scene cannot be good if you do not listen to your partner and instead you plan what you will say next,” he said.

The rules of improv are also rules of friendship.

“You have to be positive and contribute to ideas,” Jacobs said. “You have to listen. You have to support and trust one another and yourself, and it is always about making your partner, rather than yourself, look good.”

What is next for Rathskellar? On April 19 in Harland Cinema, the group will team up with Dad’s Garage, a professional Atlanta-based improv group. They will also have their final senior show on Monday, April 28 in the same location.

Aspiring to make people laugh is what Rathskellar strives for. However, the group is interested in expensive, qualitative humor.

“We avoid dirty humor because it’s risky, risquÃ© and also easy. It’s harder to make people laugh with something that’s clean and more challenging. I think it makes what we do a bit more noble,” Jacobs said.

Rathskellar is a group of hilarious, smart and dedicated people, according to Jacobs.

“We aspire to make our audience laugh, but we’re always trying to crack each other up, too,” he said. “It’s comedy with a heart, and I think that’s very important,” Jacobs said.