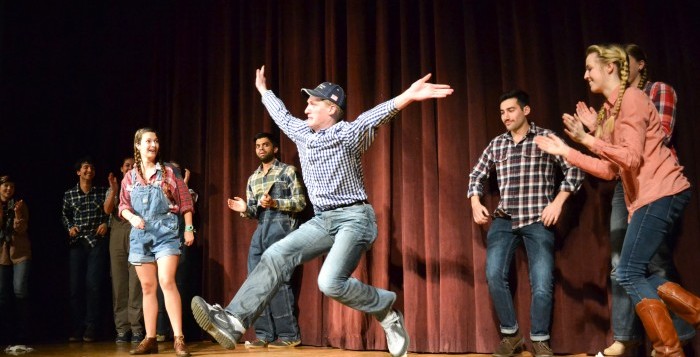 Rathskellar has done it again. From the plaid attire to the country twangs, “Old McSkellar Had a Farm” was a farm-filled funny fest.

On Saturday, Nov. 22 in Harland Cinema, Emory’s improv comedy troupe, Rathskellar, performed some new games as well as some old classics. The evening started off with a game called “New Choice.” For this game College seniors Natalia Via and Neel Ghosh, two of my favorite Rathskellar members, pretended to be in a custodial closet. The humor that ensued was a bit grotesque but, nonetheless, laugh-out-loud hilarious.

Via was also phenomenal in the Shakespeare game performed later on in the evening. Via and College senior Julia Weeks spoke in Shakespeare-esque language about a radio, or as they called it, “a metal box of music.” Via’s emphatic gestures and unintelligible verbal ramblings were perfect. Her gestures stood out most when Weeks threatened to change the radio station to the modern age, and Via became visibly distraught over the thought of losing her Shakespearean identity. Both girls perfectly intertwined the classic English with comedy while at the same time making it seem as though classical English was their first language.

Another notable performance was from College freshman Jay Gillen, whose first game of the show was “Musical On-Off.” Taking on the role of a protective zookeeper, he tried to keep a lovestruck girl away from a koala (okay, you had to be there).

His musical numbers, full of perfect rhymes and accompanied by incredible dance moves, mesmerized the audience.

Standing at six feet, five inches, Gillen’s jig, which consisted of him jumping up and down dancing across the stage, made it impossible not to notice him. As a member of Rathskellar for a matter of months, Gillen is already a rising star.

“Death Box,” a game that I had never seen before, was definitely one of the most unique and complex games of the night as it involved multiple players and multiple roles. In this game, four students (four pairs) rotated in a box.
Each pair was assigned either a relationship or a non-geographic location. The most entertaining pair by far was Ghosh and College junior Mike Green. Ghosh’s opening line, “This was the worst honeymoon idea ever,” immediately grasped the audience’s attention.

The setting was an igloo, and from being ice-stuck to each other to the petty bickerings of a married couple, the two played the perfect honeymooners.

Another great game was “Character Switch,” acted by College senior Josh Jacobs and Gillen. Switching between the dark and gloomy Ozzy Osborne and a jovial drummer was no easy feat, but Gillen and Jacobs managed flawlessly. Gillen began the sketch as Osborne, with Josh as the jovial drummer, a role perfect for his constantly smiling face. Osborne was the dark, negative leader, and the drummer was the happy-go-lucky, unsuspecting and faithful drummer.

The sketch quickly turned dark with Osborne threatening to kill the drummer. However, this also proved entertaining because the more the two switched roles, the harder it was for Gillen and Jacobs to figure out who was going to meet his demise.

The final sketch of the night was Rathskellar’s first-ever long-form: a short play. Though somewhat disjointed, the different acts were related by common themes. The overarching theme ended up being about various friends, lovers and strangers asking each other to prom, which rang true with the college audience as we many of us are familiar with that situation.

From the “friend zone” scene acted by Ghosh and Natalia to the “stranger in a well” conflict acted by Jacobs and College junior Rebecca Han, the audience could not stop laughing in mutual understanding.

Overall, the show was, as it always is, a great break from the stress of looming finals. It is important to remember to laugh and when you attend a Rathskellar show, they don’t have any trouble reminding you.