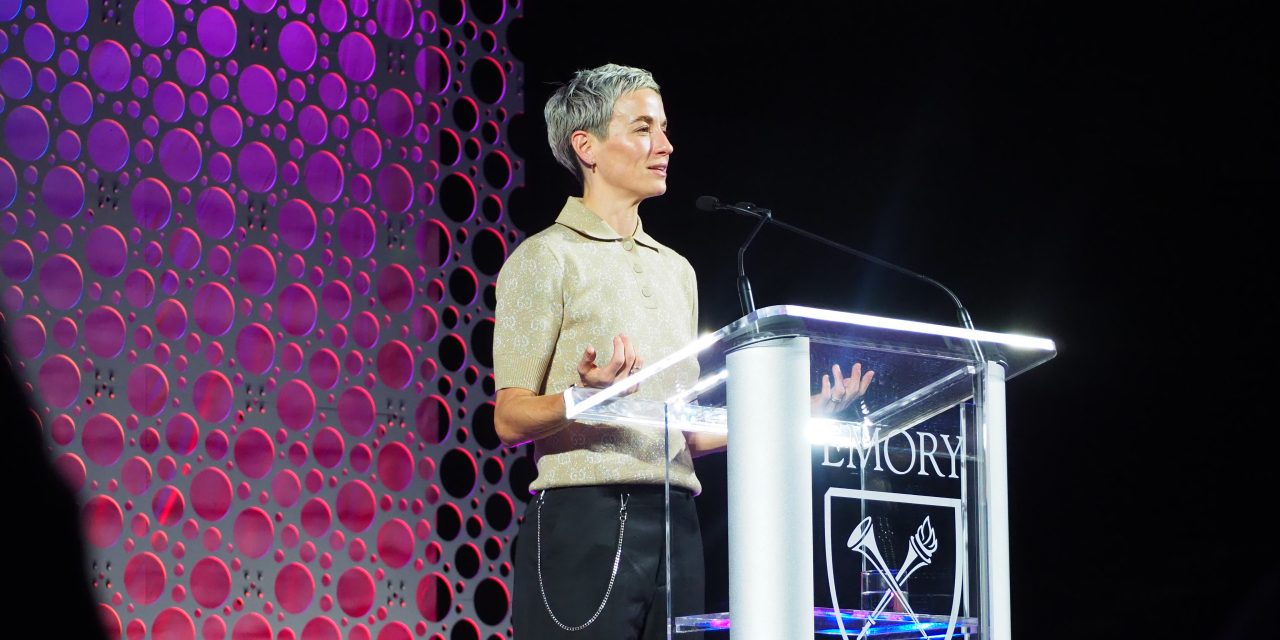 Emory University’s 41st annual Jimmy Carter Town Hall featured U.S. Women’s National Soccer Team (USWNT) forward and outspoken social advocate Megan Rapinoe as the keynote speaker on Sept. 19. She was greeted by an audience of nearly 2,000 students during the town hall, which was held in-person for the first time in three years.

“To be able to speak to such a young group of kids is just such an honor of mine,” Rapinoe said. “It’s something that I really, truly love doing.”

The Carter Town Hall is an annual speech event to welcome first-year students to Emory, although athletes and student leaders were invited as well.

Rapinoe is considered one of the most decorated athletes in women’s soccer history with two World Cup wins and an Olympic gold medal under her belt. Off the field, she is widely known for fighting for gender equality and leading the fight to close the gender pay gap between the women’s and men’s U.S. national teams. Rapinoe is also a strong proponent of LGBTQ+ and racial equality. 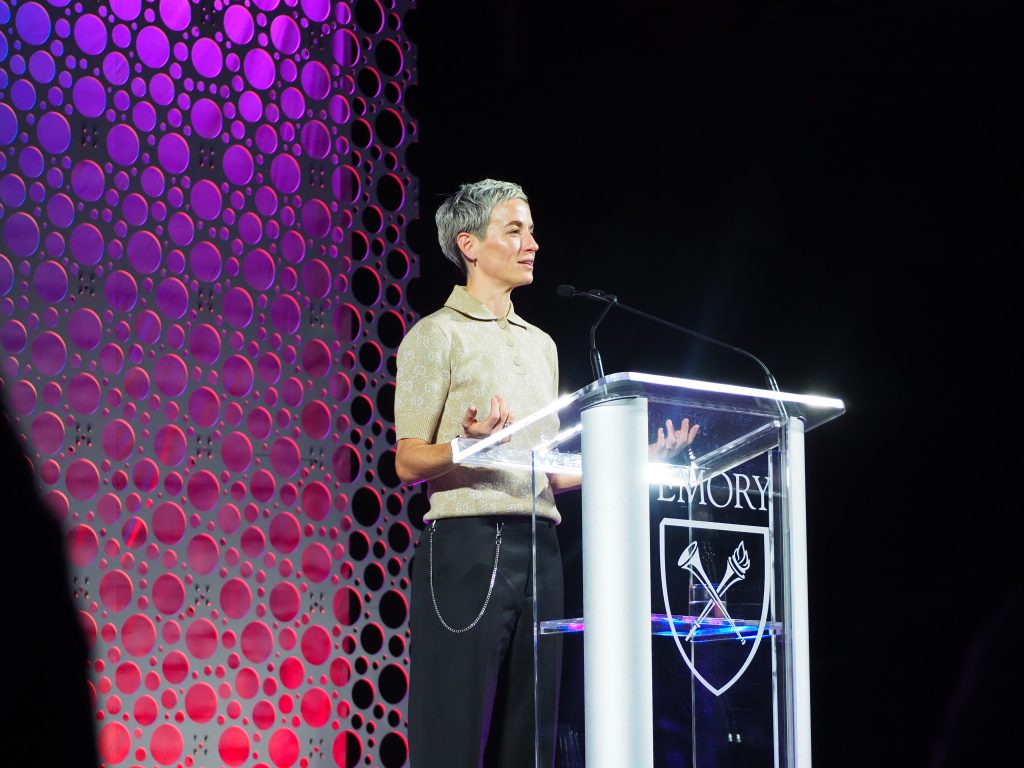 Carter Center Chief Executive Officer Paige Alexander spoke at the event, noting that Rapinoe’s dedication to social justice aligns with the values of former U.S. President and University Distinguished Professor Jimmy Carter, who is the town hall’s namesake at 97 years old. He spoke at the first 38 town halls but did not attend this past event for the third year in a row due to retirement. His first absence in October 2020 was attributed to recovery from a November 2019 brain surgery.

“She’s been a true champion on and off the pitch,” Alexander said. “Looking at the fight that she had for LGBTQIA rights, for women’s equity and salary equity, for human rights in general, really means this is part of what the Carter Center is all about.”

“Like President Carter, she has played a pivotal role in changing history,” Fenves said.

Rapinoe kicked off her speech by explaining that speaking to Emory’s Class of 2026 brought her back to her first semester at the University of Portland (Ore.), when she was a new student with “wide-eyed wonder.”

“It’s just this opportunity where you have a bit of a safety net, but you’re still sort of required and put in a situation where you have to ask yourself questions,” Rapinoe said. “I just encourage all of you to be really curious about that, to give yourself the space to answer those questions, to give yourself the space to show up as a full human in the world.”

An internationally-known soccer player, Rapinoe noted that a team’s success comes from the people who learn who they are and unapologetically take up space.

“The most successful teams are not full of people who sacrificed everything to be on the team,” Rapinoe said. “It’s full of people who refuse to sacrifice themselves, and they bring whatever their work is, whatever their special talent is, whatever that personality trait is, for the greater good, and not only do they bring that themselves, they allow a space for everyone else to bring that as well.”

A Q&A was held during the second half of the town hall where Barkley Forum members Mia Leutzinger (25C) and Sam Shafiro (25C) asked Rapinoe student-submitted questions.

“She kept looking over at me and it made me feel like I was having a conversation with her,” Leutzinger said. “It was amazing. She’s one of the coolest people I’ve ever met.”

Rapinoe discussed the 2019 World Cup, during which the USWNT beat the Netherlands in the final to secure their second consecutive World Cup title. She said coming out on top felt “surreal.”

“It’s like this childhood dream,” Rapinoe said. “It seems sort of fake in a way. It’s lived in your head for so long.”

The 2019 World Cup came three months after members of the USWNT filed a gender discrimination lawsuit against U.S. Soccer, accusing the governing body of paying women less and subjecting them to more dangerous playing conditions.

Additionally, Rapinoe was in a public quarrel with former U.S. President Donald Trump after she told a reporter in June 2019 “I’m not going to the f****** White House” if she were to win the World Cup. Trump responded in a series of Tweets stating that while he is a fan of the USWNT, Rapinoe was disrespecting “our Country, the White House or our Flag.” He also criticized her for protesting the U.S. National Anthem before games.

“Megan should WIN first before she TALKS!” Trump tweeted. “Finish the job!” 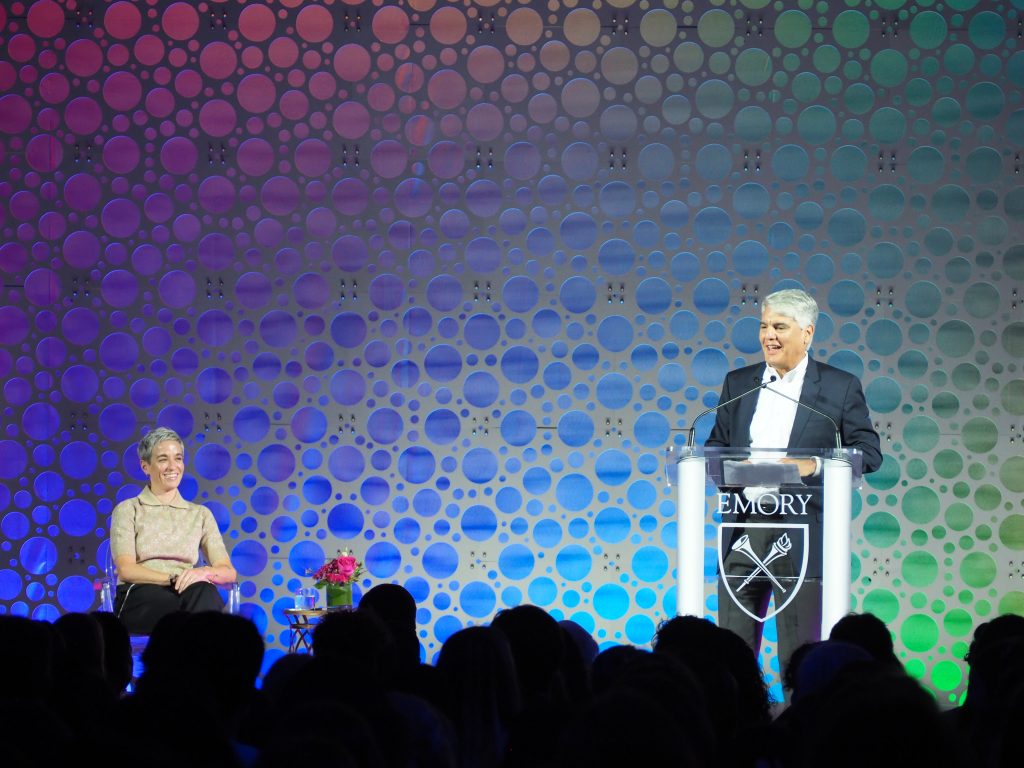 Rapinoe explained that the controversy made the tournament “unique,” but added that “dunking the president” was one of the best parts of her World Cup win.

“A former president getting involved, I’m like, ‘Are you rooting for the team?’” Rapinoe said. “‘You seem really into it, but you’re getting a little confused by the fact that it’s women, but you’re into the confidence that we have. … You wish you could root for us.’”

Rapinoe noted that off the field, she is most proud of how her team has leveraged their talent to promote change in the world, especially when it comes to achieving equal pay, which she called a “monumental” accomplishment.

She added that knowing she will be leaving women’s soccer in better conditions than what she faced as a young player will be a “big legacy point” for her and her teammates.

“Just knowing that no one else, no other woman coming up in this federation, playing a sport in this country, will ever have to deal with what we did, and knowing that we have it so much better than those who came before us,” Rapinoe said. “The only reason we were able to really do this and achieve this is because we were standing on the shoulders of so many other women.”

Rapinoe is also known as a strong supporter of LGBTQ+ rights and transgender inclusion in sports. She explained that to break into generally-ostracized spaces, queer people need to show up as their full selves and find a community that can support them. She added that it was also on straight people to create welcoming environments.

She also noted that it helps to find LGBTQ+ people who have walked the same path before. Although Rapinoe noted that the number of openly-queer public figures was slim when she was younger — citing Ellen DeGeneres and Billie Jean King as examples — she said the community has grown in recent years. This includes Rapinoe, who is open about her five-year long relationship with WNBA player Sue Bird.

“When we sort of keep ourselves small and internal, the stories can go any which way, and it can feel very lonely,” Rapinoe said. “But I think the more we talk about it, the more we show up as our full selves, the more we kind of demand that space, I think the easier it becomes to step into it.”

Rapinoe explained that her parents — especially her mother — are her biggest role models. She said her parents “did equal gender roles” without ever discussing it, allowing her to grow up in an “equality-driven” home.

Growing up, Rapinoe said she and her twin sister, Rachael Rapinoe, were both popular at school and excelled in sports, ultimately going on to play together in college. However, her mom always made it clear that using their social influence to help others was more important.

“I’m so thankful that she was always like that, and she lives her life like that, but also imparted that onto my sister and the rest of my siblings as well,” Rapinoe said.

She noted that students should strive to do the same in their daily lives so they can use their skills to advocate for change.

“Something that I wish someone would have told me in college, and I’m coming to it now at the tender age of 37, is that the work that we’re supposed to do in life really has nothing to do with the job that we do,” Rapinoe said. “I really encourage all of you, especially as you set out into your first semester, into your first year here, to think about not just what you want to do, but who you want to be in the world, and sort of marrying those two.”