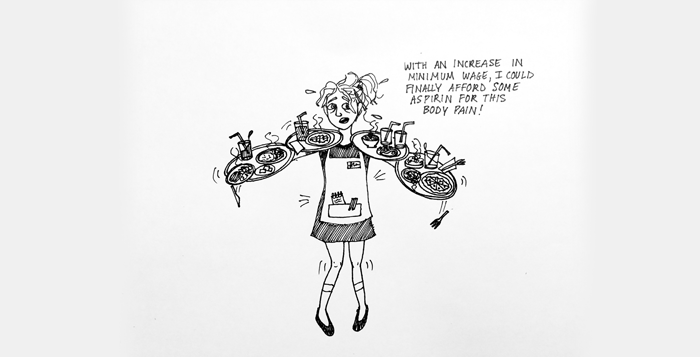 In January, a proposal was made in Congress that would, if passed, increase the federal minimum wage to $10.10 over two and a half years. The current minimum wage is $7.25. Anything lower is not considered by the United States government to be a livable wage.

Sadly, some companies find it difficult enough to pay the current minimum wage. Last week, workers in three states filed lawsuits against McDonald’s for illegally reducing their pay below the minimum wage. The workers accused franchise owners of subjecting them to cost-cutting methods. Employees were forced to do things like purchase their own uniforms or work without pay until enough customers arrived, at the expense of their own already low standard of living.

It is true that only 1.6 million Americans earn $7.25 an hour, and it is also true that one-third of them are teenagers. But it is complete misdirection to argue that because of these facts, a minimum wage increase would be an overall bad thing. To make such an argument demonstrates an utter lack of knowledge on the issue’s complexity.

A teenager might consider $15,080 per year, the amount a full-time employee earning minimum wage, livable. But most would agree that $15,080 is not enough to support a family. Anyone who disagrees needs to reassess the reality of life in America, especially considering the fact that this year’s poverty threshold is $19,790 for a three-person household.

A $10.10 minimum wage would grant full-time employees an additional $5,928 per year, thus pulling thousands of minimum-wage-earning families out of poverty. Like all political and economic decisions, this increase would have unintended consequences. Because firms tend to hire less workers when they are forced to raise wages, the minimum wage and unemployment are positively related. Raising the former will necessarily cause the latter to increase as well.

Yet nothing suggests that the negative effects of a minimum wage hike will necessarily outweigh the positives. Let’s say that the minimum wage were suddenly doubled. Theoretically, a household of two full-time workers would be able to receive its previous yearly income in half the usual time. Even if the hike led to unemployment for one of the workers, the other’s doubled salary would essentially make up the difference. In other words, total household income increases significantly at best. At worst, the household breaks even.

This example is merely hypothetical, and it does not account for a single household in which case the stakes are double or nothing. Economics gets a bad rap for utilizing such abstract models to explain real world phenomena. Nonetheless, a strong social safety net is critical, not on the moral grounds that politicians both left and right preach, but based solely on the efficiency of the economy as a whole. Idle wealth is pointless. Peddling on street corners for MARTA fare is not pointless.

The case for the $10.10 increase is so concrete that the opposition has resorted to fear mongering and manipulation of economic data in its most recent effort to quash the legislation. In response to a letter signed by 600 economists in favor of the proposed wage hike, a nonprofit research group known as the Employment Policies Institute (EPI) openly sponsored a letter calling the proposal a “poorly targeted anti-poverty measure.” It received signatures from only 500 economists.

Last month, an article published in The New York Times revealed some of the EPI’s secret clients, like the National Restaurant Association and the National Retail Federation, two groups representing industries that would certainly be affected by the wage hike. These groups have spent and will continue to spend millions of dollars on advertising, lobbying, and research groups like the EPI in order to reach their goal.

For example, in retaliation to the Times article, the EPI took out a full-page advertisement in the paper which lists Marxist or vaguely anti-American quotes made by only eight of those six-hundred economists who signed in favor of the wage hike. If the EPI’s own letter were to be cherry-picked in such a manner, there is no doubt that the selected quotes would be equally as unflattering, if not more so.

The American people have a choice. They can side with industry giants who coerce and fabricate in order to reach their bottom lines, or they can side with their 25 million fellow citizens who are just trying to scrape by.

The Necessary Months of Forgotten Autumn

In Tuesday’s Runoff, Stand Up for Democracy