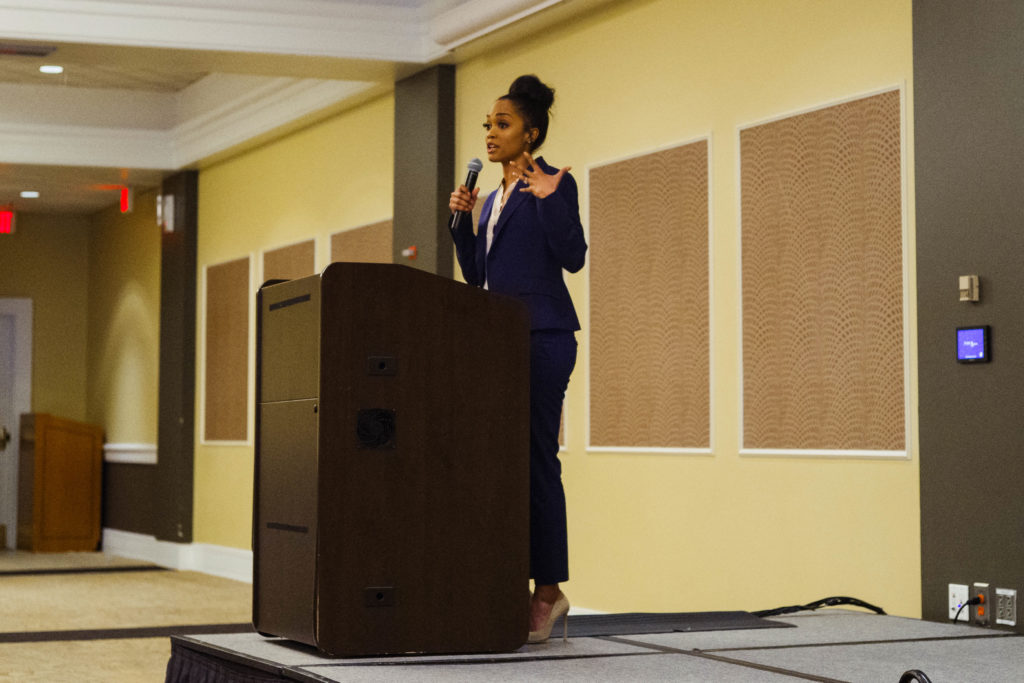 Star of ‘The Bachelorette’ season 13 Rachel Lindsay speaks to an audience of 135 undergraduate students about her journey prior to appearing on the show, in a March 27 conversation sponsored by the Student Programming Council (SPC)./Photo by Chloe Luo, Contributing.

When Rachel Lindsay was sent home without a rose in the ninth week of “The Bachelor,” it seemed like she had made a mistake. She left behind a promising career as an attorney to compete in the show’s 21st season. However, four months later in June 2017, Lindsay became the franchise’s first black lead when she debuted as the Bachelorette on season 13.

Emory’s Student Programming Association (SPC) hosted “A Conversation with Rachel Lindsay” in the Cox ballroom on March 27, giving students a chance to interact with the reality television star and learn about the show’s behind-the-scenes logistics. SPC members Anna Wachspress (21C) and Jamie Epstein (20C), who planned the event, reported that 135 students attended the event.

For the first 20 minutes of the event, Lindsay spoke about her life and why she chose to compete in ‘The Bachelor” and eventually become the Bachelorette. The rest of the event centered around student questions for Lindsay.

As a middle child, Lindsay said she always felt the need to please her parents. Her father, Sam A. Lindsay, a district judge of the United States District Court for the Northern District of Texas, influenced her decision to become a lawyer. During her opening speech, she often compared herself to a “caged bird” who wanted to expand her horizons but struggled to do so.

When Lindsay started at the University of Texas at Austin, she expected to major in government but decided to try a new path and instead majored in sports management.

“My dad made me create a PowerPoint … about this major, the different jobs I could get from it, what it meant to me … and if I could still go to law school after it,” Lindsay said. “[This is] why I was so scared to be what I wanted to be.”

Jason Goodman (21C) initially came to the event to support his friend Alex Chanen (21C), who hosted the event. Goodman had few expectations but was pleasantly surprised by Lindsay’s speech describing her career trajectory and growth.

“I did watch Rachel on ‘The Bachelor’ a little bit … but I personally didn’t know that she is in sport analytics,” Goodman said. “It’s such a hard field to get into, and obviously I can’t even imagine being a woman of color trying to get into the sports field, but I think that the way she talked about being who you are and knowing who you’re living for … were some major takeaways.”

Once Lindsay knew that she wanted to become a lawyer, she embarked on her Juris Doctor at Marquette University (Wis.) in 2011 to practice sports law. She soon began working at a local Texas law firm. Still, she recalled feeling like she was “caging her bird.”

Then, in 2016, while Lindsay sat in her office, two women came in after-hours.

“They approached me and they said ‘You know what Rachel, you should be on ‘The Bachelor,’” Lindsay said. “Can you imagine? I’m thinking they want my help on a case … [or] maybe they’re hazing me … I laughed and told them … ‘Well I don’t really watch that show, but everyone knows that the black girl doesn’t go far, right?’”

Prior to joining the cast of “The Bachelor” in 2017, Lindsay only knew that the show had never featured a person of color as its titular lead. She had never watched the show, and only finished her first complete season while she packed.

“I had been to ‘Bachelor’ watch parties, but only to drink,” Lindsay said.

After burying her initial skepticism, Lindsay went on to become the first black lead in the franchise. She said she recognized her opportunity to present herself where African-Americans are underrepresented.

Ciara Murphy (21C), who admitted that she initially did not see herself attending the event due to her disagreement with Lindsay’s choice of quitting her legal career to appear on “The Bachelor,” said she was ultimately glad she attended the event.

“I originally came in being really pessimistic and kind of expecting to be unimpressed with her, because I knew she gave up being a lawyer to be on the show,” Murphy said. “But I think listening to her talk gave me a new perspective about her … and she just seemed really genuine and really cool and just really personable.”

Lindsay is still an attorney with Texas law firm Cooper and Scully, P.C., but also co-hosts ESPN’s Football Frenzy alongside Field Yates and Bobby Carpenter every Sunday at 5:00 p.m.

Wachspress and Epstein wrote in a March 28 email to the Wheel that they specifically invited Lindsay to speak at Emory because of her successful and respectable platform.

“Our goal for this event was to bring a speaker that would be motivational and insightful, while still … exciting for students,” Wachspress and Epstein wrote. “[Lindsay] is widely admired by fans for being respectable, self-aware and confident. Therefore, we felt she would be engaging, interesting and moving.”

Other students focused their questions on Lindsay’s experience on “The Bachelor” and “The Bachelorette,” hoping to gain an insider’s perspective on the show’s inner workings, even asking whether the show was scripted to an extent.

Lindsay said that the show never used a script; rather, producers would often ask targeted questions in hopes of getting a specific response.

“It was not scripted at all … [but] I do think that some people are very impressionable, so there is a little bit of twisting when it comes to that,” Lindsay said. “It’s never a, ‘You should go say this to this person,’ it’s more of a, ‘How did you feel when Nick walked in the room and he looked at Rachel and didn’t look at you?’”

Although she left “The Bachelor” single, Lindsay finished her stint as the Bachelorette happily engaged to Bryan Abasolo, whom she is set to marry in August 2019.

But Lindsay’s post-Bachelorette experience has not been all positive. She explained that she still deals with anonymous, hateful comments on a daily basis.

“[The racism and backlash] never stops,” Lindsay said. “I can post a picture and there is some troll on my page, no face, no followers, saying something to me … I have moments where it truly does get to me. You just have to keep yourself grounded with those who know you and know your worth.”

As Lindsay stepped off the stage after the hour-long event, she ended her speech by urging students to follow their own paths in life.