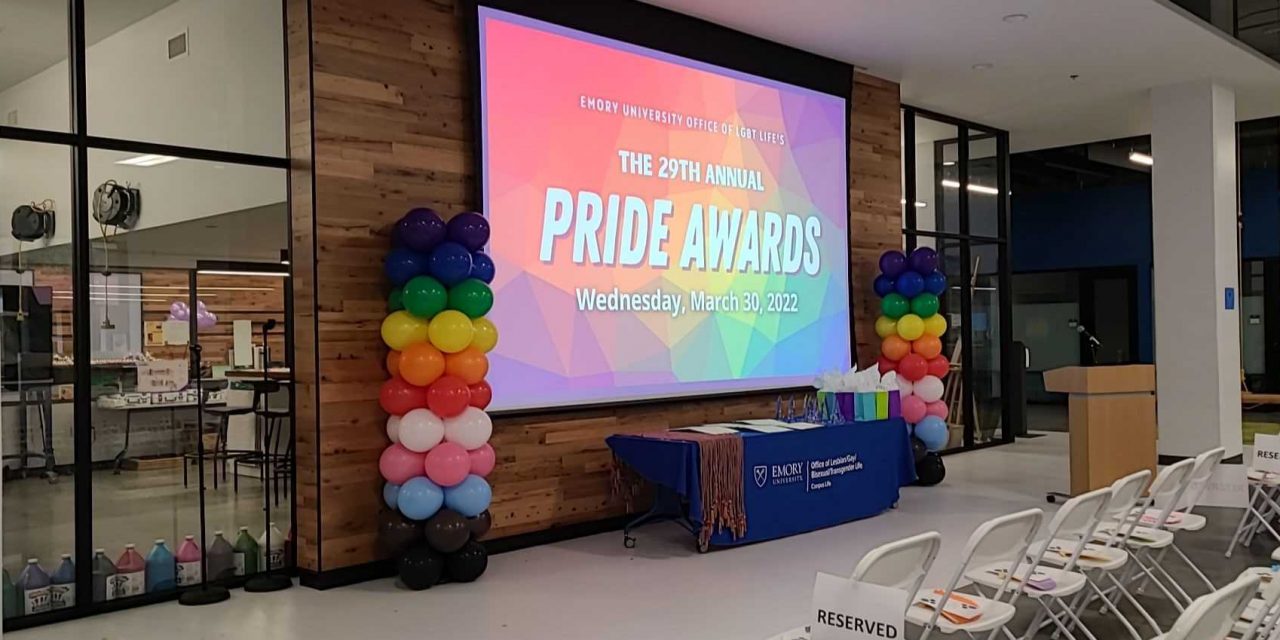 When over 120 students, faculty and alumni filed into the Hatchery to celebrate the Pride Awards and Lavender Graduation March 30, they hardly looked dressed for the same event. Some donned flannel shirts, others showed out in suits and dresses. Heels clicked on the floor while Dr. Martens stomped over the sound of the “Queer Glory” playlist pumping through the speakers. Rainbow hair stood out in the sea of blondes and brunettes.

The group was encouraged to dress in what Office of LGBT Life director Danielle Bruce-Steele described as “queer chic” — a term that translates to leaving society’s expectations at the door and wearing whatever they feel the best in.

Bruce-Steele said she wanted everyone to show up as their most “queer” and “authentic” selves, because that is exactly what they were there to celebrate.

“For one night, we’re just going to share all the great things we’ve done together as a community and celebrate accomplishments,” Bruce-Steele said. “For the lav grads, making it four or five or six or seven years here at this university and kind of making it to the other end. So, it’s a celebration before we move on out into the world where sometimes it’s a lot less friendly than it is here on campus.”

The Pride Awards are a major part of Bruce-Steele’s plan to make campus welcoming to queer students. Following a year of anti-LGBTQ legislation, the event was an act of resistance for queer students and staff.

At the forefront of the nationwide wave of anti-LGBTQ legislation is the Parental Rights in Education Bill, commonly known as the “Don’t Say Gay” bill, which was passed in Florida March 8, and bans lessons on sexual orientation in kindergarten through third grade. In Georgia, Senate Bill 613 was introduced shortly after in an attempt to ban “developmentally inappropriate” discussions about sexuality and gender identity in some private elementary schools. If passed, Emory would not have to change its curriculum because it is a private University.

“People are a lot of times focused on just looking for votes, and so sometimes I think it’s easy to pick on people who are most marginalized in society,” Bruce-Steele said.

Associate professor of religion Sara McClintock, who identifies as nonbinary and bisexual, said the law would harm students by forcing them to essentially “erase” people, such as a gay or transgender parent, from their lives once they step into the classroom.

“We already know how gay and transgender young people are more susceptible to bullying, depression, suicide,” McClintock said. “All these risks are there, so to enshrine this kind of discrimination into law strikes me as extremely dangerous.”

Bruce-Steele said while the event was meant to be a happy one, she could not ignore the “hurtful” bills and the struggles of the LGBTQ community.

“As strides toward equality have been made each year, so have attacks against our existence,” Bruce-Steele said during her speech at the Pride Awards. “This year has been no different, yet in some ways they feel especially hurtful given the backdrop of the profound loss of the last two years.”

She also noted an increase in transphobia, such as the nationwide fight against transgender women in sports.

“We can tune it out a lot of times, but then when it starts to come from so many places at once, it’s a heavy burden, and I think our students feel that burden,” Bruce-Steele said. “Emory may be a bubble, but it’s not impenetrable.”

However, the LGBTQ community on campus has been celebrating their accomplishments in the face of oppression for decades, Bruce-Steele said. She explained that the event started about 29 years ago with Saralyn Chesnut, the inaugural director of the Office of LGBT life. Chesnut created the Pride Awards banquet to celebrate the progress made during that year with a sit-down dinner and keynote speaker.

“So much of who we are is this battle, it always feels like we’re ready for the next battle, the next challenge to us being who we are,” Bruce-Steele said. “The Pride Awards are meant to be this time to celebrate, to genuinely be excited and happy and be who we are.”

When Bruce-Steele took over about a decade ago, she established the Awards, which are given to students, faculty and alumni.

“It’s also really neat to read about these people and all their accomplishments and then get to see them and chat with them really quickly, even if it’s just for a few moments, to be like, ‘Wow … the form I fill out when I go to the doctor, you helped change the language so that my experience and my family is reflected on this form so that I can receive better care,’” Bruce-Steele said.

Bruce-Steele added that the awards celebrated the “awesome” things queer students were going to achieve in their future, despite the pandemic interfering with their college experience.

“The things that they’re doing are incredible,” Bruce-Steele said. “There’s going to be a [neonatal intensive care unit] nurse, and someone’s over here doing oncology research and playwrights and all these fellowships.”

She added that 52 students signed up to be lavender graduates and receive a rainbow cord at the event, which is the most Bruce-Steele has seen in her 22 years at Emory.

The Lavender Graduation and Pride Awards also featured a year-in-review slideshow, which reflected on the different events that the Office of LGBT life hosted this year. From plant swaps and crafts to gender-affirming clothing drives and discussion sessions for identity groups within the LGBTQ community, Bruce-Steele said these events helped bring students to the Office and create a safe space.

“That’s what I’m working on every day,” Bruce-Steele said. “How do we continue to make this place even better, so that students have a great experience when they’re here, not in spite of being queer or trans, but in part because they are queer and trans?”

The Pride Awards were dedicated to fostering community and fun among queer students, faculty and alumni. It included stations for creating buttons and quilt squares, which will be hung up in the new LGBT Life Space when the University moves their identity spaces from Alumni Memorial University Center into Cox Hall in fall 2023.

Preparation for the Pride Awards began at the end of the last semester, when the Office began gathering registration for lavender graduates and nominations for the awards. The event’s usual location — the Miller-Ward Alumni House — was under renovation, so the celebration was moved to the Hatchery.

“That was a new and exciting challenge,” Bruce-Steele said. “We really enjoyed working with the folks at the Hatchery, and we leaned into their really fun, quirky space. We were like, ‘LGBT Life and the Pride Awards are fun and quirky, so it would be a great fit.’”

Bruce-Steele credited the Office of LGBT Life’s student staff for helping set up the event, as well as for keeping the office afloat the past year. She explained that they were short staffed this year, leaving just her and program coordinator Jacqueline Veliz, so the students stepped up to help keep programs running.

As Veliz presented the awards to the students, her voice shook with emotion.

“Thank you for being the absolute best people to work with,” Veliz said. “I could not have made it through this return to campus without each single one of y’all.”

Seeing so many queer students and allies leave the hate behind to come together as their authentic selves at the Hatchery — even if it was only for a brief moment in time — made the preparation worth it for Bruce-Steele.

“Sometimes the accomplishment is having existed, to have been authentic in who you are and to have navigated this place, and contributed your existence and your truth to a space,” Bruce-Steele said. “That’s worthy of celebration.”