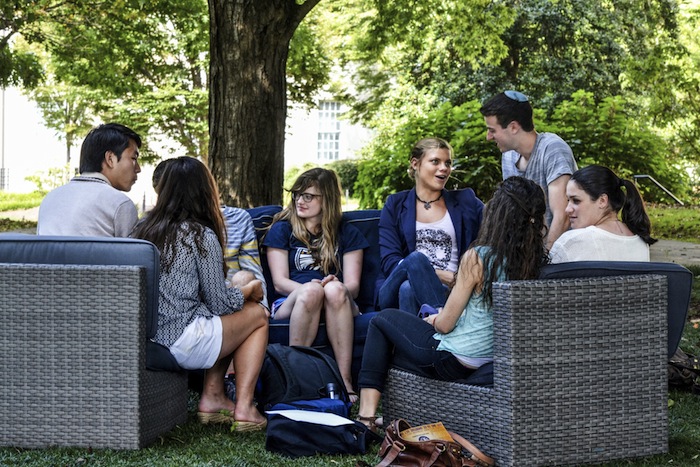 Upon arriving at Emory, students leave the bubble of their hometowns and are exposed to different cultures. However, sometimes this change can be overwhelming, causing some to gravitate toward and find comfort with  people whose backgrounds are more similar to their own.

In 2013, College senior Ami Fields-Meyer and Goizueta Business School senior Adam Goldstein, the founders of TableTalk, set out to fix that problem. The organization aims to facilitate conversations between people of different backgrounds by setting up couches across campus through their CampusCouches program, planning TableTalk between different student organizations and setting up stickers with conversation starters at tables in the Dobbs University Center (DUC).

“[I am] thrilled to see how well the program has been received by the Emory community,” Senior Vice President and Dean of Campus Life Ajay Nair said. “[TableTalk highlights Emory’s] commitment to set a place at the table for anyone and everyone to talk, listen and engage in dialogue about today’s many critical issues … [which is] what a liberal arts education is about, especially at Emory.”

Two years after its founding, the Wheel caught up with Fields-Meyer and Goldstein to see how TableTalk has evolved and what its impact has been on campus.

Emory Wheel: What were your expectations before you started TableTalk?

Ami Fields-Meyer: As freshmen and early into our sophomore year, [Adam and I] noticed that we were spending most of our time with people who looked like us, talked like us, had similar socioeconomic and religious backgrounds to ours. We talked to other student leaders and the feeling was nearly universal. So we set out to push Emory toward a culture of conversation and that’s been our guidepost ever since.

EW: Have the results of TableTalk exceeded your expectations?

AFM: Yes. People resonate with TableTalk because it’s so simple. But what started as a small project has grown into a 50-person organization working actively — and in several spheres — to change Emory’s culture. With TableTalk, we still facilitate conversations between groups over a shared meal. On CampusCouches, students, faculty, administrators, kids, parents and Emory hospital staff have taken a seat to chat. And we’ve been working hard to bring the community new initiatives — involving dining, academic discussion and even music — for community engagement. We’ve grown into a highly effective task force for community engagement.

EW: Have all of the TableTalk campaigns been equally successful?

AFM: Each campaign aims toward a different goal, so we measure each with its own barometer. CampusCouches has certainly been the most visible campaign, and the one that has attracted the most interest from students at other universities. It’s also the most accessible, because anyone can join a conversation on a couch. We actually met a couple who started dating after meeting on a CampusCouch. But TableTalk — which require a bit more effort, planning, direction and money — have sparked relationships across cultures, interests, political affiliations and social groups.

EW: What do you think could be improved about TableTalk?

AFM: We’d like TableTalk to happen on a weekly basis, like CampusCouches does. But that’s going to require organizations to actively seek them out. We don’t dictate who talks to one another — we only ask, and when we see two organizations that have matched, we connect them and facilitate a conversation. It’s like Tinder, but for student groups.

Another dream of ours is to see a set of TableTalk between Emory administrators, faculty and Bon Appetit’s service workers. But, again, those groups need to come to the table themselves. We can just give them a table, some food and a framework.

EW: How has TableTalk evolved at Emory and beyond since last year?

Adam Goldstein: We came up in a conversation on Ami’s couch. We started just the two of us, wrote a proposal and presented it to 20 student leaders. And we ran our first TableTalk in Spring 2013 with the Buddhist Club and the Muslim Student Association. Now, TableTalk is about a 50-person team, with three divisions: TableTalk, CampusCouches and TableTalk[x], which is our creative incubator for new community engagement ideas. We’ve now just gone through our second recruitment process and have three strong teams working actively on new issues.

The other important evolution is TableTalk’s presence at other colleges: TableTalk chapters now exist on four other college campuses, including the University of Pennsylvania, Indiana Univeristy, Brandeis and Haverford.Some are more active than others; the University of Pennsylvania’s chapter, for example, runs events every other week and has already engaged many facets of its community. We’re very excited to have seen the idea catch on.

We’re beginning to help set up chapters at three other colleges, so stay tuned.

EW: Do you have any data on how many students have participated in TableTalk?

AG: We have done 14 TableTalk, with over 160 students in total. We have done 11 CampusCouches and dozens of students, faculty and staff have sat on the couches.

EW: Does the need still exist for TableTalk programs as much as it did when you started it?

AG: Yes. TableTalk has helped start conversations, but our goal is to change the culture — to make Emory a place where it’s second nature to sit down with someone you’ve never met, to engage with ideas that make you uncomfortable, to ask penetrating questions to the only people really qualified to answer them.

EW: Do you have any plans for TableTalk in the future?

AG: Ami and I have started to consider what it might be like to do this for a year after graduation. We met with the two guys, also best friends at Emory, who started Campus Moviefest when they were undergrads at Emory and have since then run a company with 50 employees that has spread Campus Moviefest around the country. We’ll see, but for now it’s a fun idea to tinker with.

EW: To what extent has TableTalk brought the Emory community together?