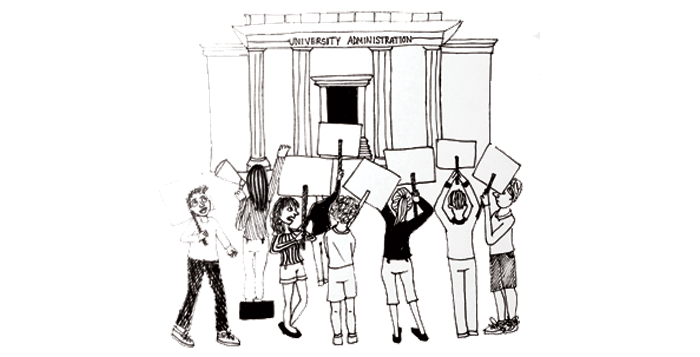 The United States has a rich history of student and youth-led activism. From the women’s liberation movement to the civil rights movement, college campuses have played an important role in social and political movements. To this day, students at campuses across the nation take part in the political process through student government and student organizations.

These engagements should be encouraged, not suppressed!

That has been the case for Northeastern University’s student organization Students for Justice in Palestine (SJP). The club has been suspended since early March. According to the university, the student group broke several university policies, and two students in the SJP were also charged by their student conduct board for breaking university rules.

Though the students were originally threatened with expulsion, pressure from the Northeastern and Boston community lead to national media attention, and the charges were drastically reduced. The students were asked to write an apology letter to the community. SJP still remains suspended.

The suspension of the organization occurred after members slipped 600 “mock evictions” notices under students’ dorm. This was done to raise awareness about Israel’s settlement expansion that has been deemed illegal by international courts and the UN Human Rights Council. These settlements often demolish existing buildings and villages and displace Palestinians. In January 2013, the United Nations published its first report on these settlements, describing them as a “creeping annexation.” According to Northeastern University, this direct action by SJP to make students aware of this was “illegal flyering,” causing students to feel intimidated.

Another reason that the university listed SJP for suspension was due to an “event disruption” that they organized. This refers to a walkout that the students partook in last June during a presentation by Israeli soldiers. In a Boston Globe article entitled “Crossed Lines of Protest, Free Speech at Northeastern,” Joan Vennochi describes the walkout as such: “At the start of the event, 35 students stood, small signs taped to their shirts. One member called the soldiers war criminals. One or two chanted slogans. They were gone in a minute.”

After this walkout, the university demanded a civility letter from SJP, which they declined to write. This is astonishing considering the fact that walkouts and sit-ins have been an integral part of anti-war protests, and Globe reporter Joan Vennochi understandably asks that we, “Imagine requiring that of anti-war protestors from an earlier era who occupied college buildings for days rather than minutes.”

You can keep up with the Northeastern SJP situation by liking their Facebook page. You can also sign a solidarity letter asking Northeastern to reinstate SJP at change.org

Suspensions of student organizations is stifling student activism, and threatening student activists with expulsion creates a chilling effect for other students. Northeastern should seriously reconsider their suspension of SJP. Instead the university should be encouraging student dialogue (and direct action if necessary) about pressing issues of the world.

In a statement about the SJP situation entitled “Our Journey to Deeper Understanding,” Northeastern President Joseph Aoun expressed his pleasure at how different perspectives are fostered at the university and how Northeastern has promoted a culture of respecting difference and diversity. The actions of the university against SJP certainly do not line up with the president’s statements.

Contrary to the popular belief that students of this generation are apathetic about politics and only limit themselves to internet activism, youth organizing is alive and well in this country. It is youth who are providing a driving force for several political movements; some examples are the LGBTQ rights movement and the undocumented students and workers justice movements. Through organizations such as the Trevor Project and the Gay Lesbian Straight Education Network, queer youth are voicing their opinions and organizing for their community. The DREAM Act was brought into national attention largely through the efforts of undocumented youth.

Nowmee Shehab is a College sophomore from Dhaka, Bangladesh.