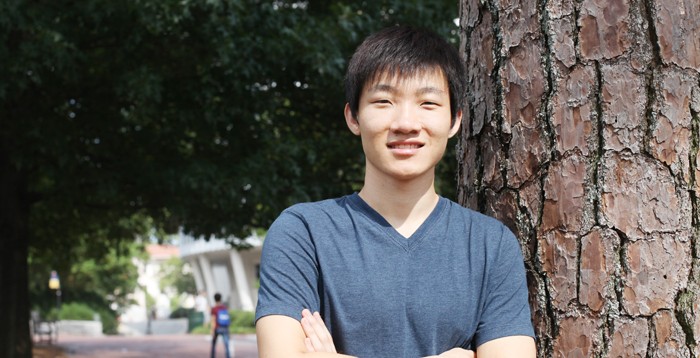 A man misses the bus one evening after dark and decides to walk the two miles home. On his way, he thinks about what he can do to enhance attitudes in the work place, what he is going to make for lunch the next day and which pajamas he’s going to wear to bed.

A woman misses the bus one evening after dark and decides to walk the two miles home. On her way, she thinks about how to fade into the background so no one notices her. She visualizes where the pepper spray is in her purse and maps out the fastest way to access it. She walks with her phone in her hand, ready to dial 911 in an instant.

What do you do on a daily basis to avoid rape, sexual assault or harassment?

This is the first question posed in College senior Caleb Peng’s video “Project Unspoken: I am Tired of the Silence” to a series of males ranging from Emory College students, staff and faculty to University President James W. Wagner. The 8-minute video, which is on YouTube, has garnered nearly 2,800 hits and attracted the attention of other universities, educators, rape crisis centers and even the White House.  All of the groups, according to Peng, are looking for ways to use the film for educational purposes.

Project Unspoken is part of Emory’s Respect Program, which aims to engage the Emory community in preventing and responding to sexual assault and relationship violence. Peng spent the summer working on the film as an intern in the Office of Health and Promotion in Emory University Student Health and Counseling Services in the Division of Campus Life.

“The process of creating, sharing and talking about this video has been one incredible facet in pursuing that mission,” Lauren Bernstein wrote in an email to the Wheel.

Bernstein is Peng’s mentor and the coordinator of Sexual and Relationship Violence Prevention, Education and Response. “A great deal of the power of this video comes from Caleb’s care and attention to representing this issue’s nuances while still creating a captivating video.

Though the first group of male participants in the film try to think about the question in a serious manner, most cannot help but crack a smile or chuckle at the seemingly ridiculous nature of the question. In the next segment of Peng’s film, however, a series of women are asked the same question: What do you do on a daily basis to avoid rape, sexual assault or harassment? Woman after woman describes well-thought-out tactics for avoiding sexual assault, everything from being aware of their surroundings to walking in lighted places, parking near entrances, and traveling in large groups. What they wear, where they walk, how friendly and trusting they are, calling friends when they leave a place and when they arrive, are all factored into the women’s strategies for avoiding harm.

Peng’s inspiration to create this film stemmed from his learning that many of his friends had been affected by sexual assault.

“I felt frustrated and angry after hearing their stories,” he wrote in an email to the Wheel. “[Often,] the people responsible for their suffering did not face any consequences. In fact, the vast majority of perpetrators go unpunished because sexual violence is usually silenced. I [want my film] to challenge society to break this silence.”

Though there were many technical challenges in the creation of this film, such as gathering information, interviewing people and editing the footage, the most difficult aspect for Peng was the presentation, he said.

“I didn’t want to make it seem like only females get sexually assaulted and raped; males are affected as well. But at the same time, I wanted to show that just being a male will most likely give you the privilege of safety since we live in a patriarchal world.”

After viewing the film, College senior Ann Willcox said she specifically felt how stark the contrast between the males’ and females’ responses was.

“I’ve continued to wonder since seeing the video if a society in which women would respond the same way to the question that men did is possible,” she said in an interview with the Wheel.

College senior Aaron Leven was also struck by this contrast.

“What was even more powerful was the difference in the tone and attitude [between the men and the women],” he said in an interview with the Wheel. “It’s not that the men were insensitive to the question, but they almost brushed it off or laughed at how odd the question seemed.”

The film closes with two powerful segments. A listing of sexual assault statistics is followed by a litany of voices affirming how “tired” they are of sexual violence: “I am tired of being afraid of other people,” “I am tired of victims being stigmatized for something that is out of their control” and “I am tired of saying this is a women’s issue. This is an everybody issue.”

Project Unspoken is not a stand-alone piece for Peng. He plans to create a series of videos to raise awareness about this and other issues, including prevention of sex trafficking.

“I also hope that this video and future videos will be a resource that anyone in the world can use to educate and encourage people to join the cause,” Peng said. “To be honest, I’m just an ordinary guy that enjoys sports, watching movies, listening to music and hanging out with friends. And at the end of the day, every ordinary person can help put an end to sexual violence.”

If you have been affected by sexual assault or relationship violence, you have support at Emory. Contact Lauren (LB) Bernstein, Coordinator of the Respect Program, at 404.727.1514 or visit http://www.bewellexcel.org/respect for more information.