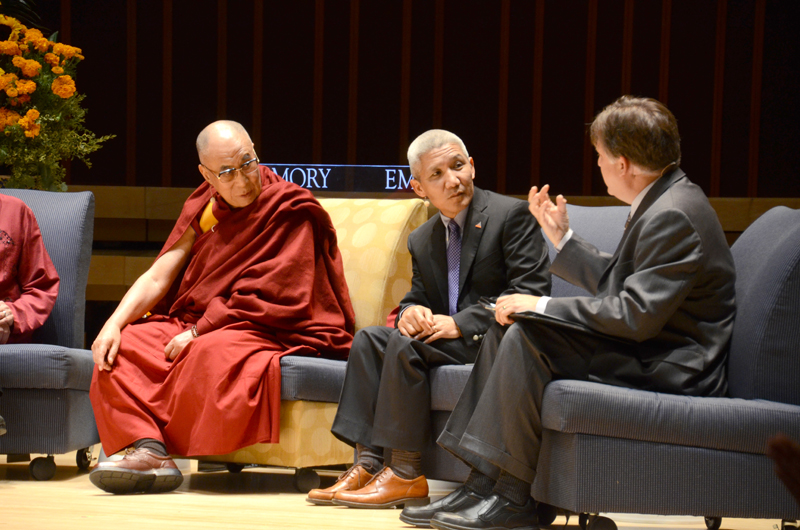 His Holiness the XIV Dalai Lama participated in a dialogue Wednesday with Emory professors about uniting religious and secular principles in a collective set of morals which His Holiness refers to as “secular ethics.”

The conversation, the fourth in a series of lectures, was held in the Schwartz Performing Arts Center and moderated by the Director for the Center for Ethics and Asa Griggs Candler Professor of Bioethics Paul Wolpe.

The Emory faculty panelists include Professor of Religion Wendy Farley, Professor of Psychology Philippe Rochat and Director of the D. Abbott Turner Program in Ethics and Servant Leadership and Coordinator of Undergraduate Studies at the Center for Ethics Edward Queen.

The discussion began with Wolpe providing a synopsis of the Dalai Lama’s book Beyond Religion: Ethics for a Whole World, which discusses the subject of morality through the Buddhist ideas of compassion and discernment.

“All human problems are ultimately related to ethics,” Wolpe said, explaining an underlying premise of the book. “True ethics must be about both behavior and motivation.”

The discussion followed a question-and-answer format in which the Dalai Lama responded to questions posed by the panelists, sometimes with the assistance of a translator.

The Dalai Lama explained that secular ethics diverges from religious ethics in that it does not mandate adherence to scripture or doctrine in the same way. In other words, secular ethics does not reject scripture, but rather tests its ethical maxims with personal experience and evidence.

The Dalai Lama added that Buddha himself discouraged people from blindly accepting his teachings through faith but rather through research and experimentation.

Some faculty members asked him about ways that secular ethics reconciles scripture with science given that it holds importance in evidence.

“We have a very narrow conception of what science is – classical science. And of course many of the whole internal domain of experience lies outside that paradigm.” the translator said, on behalf of the Dalai Lama.

The Dalai Lama said science does not have any limitations in its exploration of the mind in the context of ethics, but its motivations are self-centered.

“But I don’t know,” he added at the end, eliciting laughter from the audience. The Dalai Lama said this a few times throughout the afternoon when faced with questions with answers that are not black and white.

“That’s the safest answer,” he said, again met with the audience’s laughter.

The subject of whether religion and secular ethics can be reconciled was a common theme throughout the afternoon.

According to Wolpe’s interpretation of “secular ethics,” the Dalai Lama uses the word “secular” in a different context than what Westerners are used to – meaning not devoid of religious doctrine but inclusive of both religious and non-religious ethics.

An observing faculty member asked whether secular ethics could be considered pan-religious.

The Dalai Lama explained that most religions have similar goals.

According to him, where religious practice is concerned, most faiths are the same, but the differences come in philosophical views. Secular ethics simply uses bonds of experience and common sense.

Farley, whose specialty lies in Christianity in Emory’s Department of Religion, asked the Dalai Lama about what to do when human compassion results in awareness about an overwhelming amount of suffering. She said she wanted to know how the heart is able to bear the knowledge of suffering.

“In the Buddhist conceptualization of compassion, we make distinctions between different strengths and degrees and types of compassion,” the translator said, speaking on behalf of the Dalai Lama. “The awareness of the possibility of some kind of solution will give you much more courage.”

The discussion of suffering naturally brought up questions about the true moral nature of humanity.

Vernon Robbins, a professor of New Testament and Comparative Sacred Texts in the Department of Religion, asked the Dalai Lama why his book does not explore the subject of good and evil and why people can never agree on what is objectively good.

The translator said on behalf of the Dalai Lama that one of the problems with the term “evil” in the way it is used in English is that it indicates absoluteness.

“Anything can be changed,” the Dalai Lama said. “Even the worst kind of thing can be positively changed.”

Rochat, who researches child development, similarly asked the Dalai Lama to shed light on why children seem to develop moral principles and the concept of equity around the same time they learn to be selfish and deceitful.

The Dalai Lama posited that this could have something to do with a child’s environment.

“I think people in [the] big city – busy life and too much competition – I think [there is] more chance of telling lie[s],” he said. “I think in rural areas, when they need something, they seek God. I think such an environment makes less lies, less cheating.”

The afternoon ended on a humorous note, with the Dalai Lama teasing Rochat for admitting that he is not religious.

“After seeing his interaction with the professors and the faculty, he’s very humble. It’s refreshing to see that,” College sophomore Anna Rose Austria said.

Some students in the audience said that they learned a lot from the discussion.

“I just feel so blessed to be an Emory student,” College sophomore MacKenzie Wyatt said. “All of [the Dalai Lama’s] philosophy is just so interesting.”

Tibetan Buddhist monk Jampa Khechok, who began at Emory this fall as a part of the Emory-Tibet Science Initiative, said that while he thinks it is important keep one’s religious faith, secular ethics does have its place in the world.

“When we use this kind of scientific finding as evidence and common sense, then we can make a better understand of anything, any subject,” he said. “[Secular ethics] means you respect all religions. I know that [with] this kind of thinking we really can solve world problems.”