“The prevailing memory I have is how quiet the skies were.”

For Professor of Pedagogy Peter Wakefield, the relative calm up above in the aftermath of Sept. 11, 2001 stood in stark contrast to the distress and horror worsening daily on the ground below. Questions raced through Wakefield’s mind as the event morphed from an isolated plane crash  into multiple and from an accident to an attack, yet he said his memory clings to the absence of activity instead of the “utter confusion” following the attacks.

“It was very bizarre because Atlanta has so many [planes],” Wakefield said. “You don’t realize how many planes fly over the campus every minute and it was completely silent in that way. And that was quite eerie.”

The Sept. 11 attacks involved mission members of the Islamic terrorist group al-Qaeda hijacking four commercial planes with the goal of crashing them into iconic American buildings. The most infamous and long-lasting images came from the first two crashes into the Twin Towers in New York City, which resulted in thousands of deaths and the complete collapse of both structures. Another plane flew into the Pentagon, and the last crashed in a field in Shanksville, Pennsylvania.

Long Island, New York native Gregory Galant (05C), a first-year undergraduate student in 2001, was oblivious to the tragedies occurring in his home state until he saw screens displaying live footage of the Twin Towers upon entering the Dobbs University Center for breakfast that morning. It was there that he watched the towers fall and spent the remainder of the day back in his dorm room, glued to the news with his hallmates and trying to connect calls across the oversaturated phone lines.

“[I did] a lot of calling of the people who I knew in the New York area,” Galant said. “I grew up on Long Island and would go into the city a lot, so just being far away from it, not that I could have done anything if I was there, made me feel even more helpless at the time.” 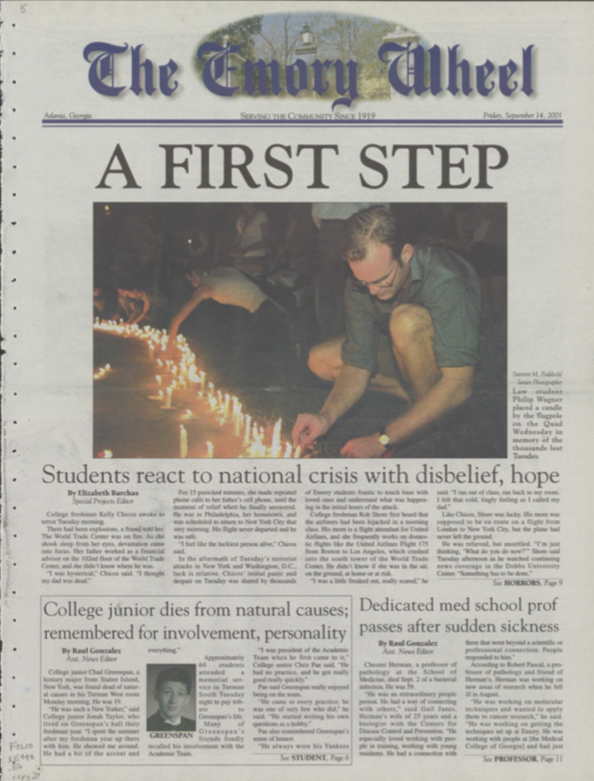 The first issue of The Wheel after Sept. 11 featured interviews with students in the wake of the attack. (Emory Wheel)

When a radio broadcast informed Samuel Candler Dobbs Professor of Psychology Robyn Fivush that a second plane had flown into the Twin Towers, dread set in as she realized that what she was witnessing was no accident. Fear and anxiety defined the hours that followed, she said, as she frantically tried to reach family whom she knew were near the site of the attacks.

“The images were playing again and again all day,” Fivush said. “Everything was overloaded. There was no good information coming out. The televised scenes were frightening, to say the least.”

Wakefield decided to hold class that afternoon, hoping to construct some normalcy for his students to combat the grief and shock many were feeling.

“A lot of my teaching is about the community of the classroom, and I thought it might be good for everyone just to see that we’re going to go on, somehow, even if it’s inadequate,” Wakefield said.

Galant admitted that while it was difficult to feel that his academics retained any gravity after the attacks, he was grateful for the routine and distraction his classes provided.

“On one hand, it makes it kind of hard to think seriously after something like that; it shifts your magnitude of things,” Galant said. “On the other hand, it was nice to have structure or something else to throw myself into, because you can’t just think about this existential issue all the time.”

Although Asa Griggs Candler Professor of Law Mary Dudziak was on the opposite end of the country on 9/11, she too experienced the visceral terror felt across the nation. After waking up in Los Angeles to radio broadcasts relaying the attacks as they unfolded, she watched the south tower fall live on CNN.

In the “horrible” aftermath, Dudziak, believing that she and her colleagues should address and analyze the attacks, organized a conference at the University of Southern California at which scholars spoke about the historical context of 9/11.

“The whole reason for the conference was to push back from the idea that scholars didn’t have anything to say yet because we had to wait and study,” Dudziak said. “In the aftermath of 9/11 historians had quite a lot to say about it, and those insights have held true over time.”

Afterwards, Dudziak edited, assembled and published the essays from the conference in her 2003 book “September 11 in History: A Watershed Moment?” The book, widely used in high school curricula across the country, was recently made openly accessible to the public in honor of the 20th anniversary of 9/11.

Fivush also wasted no time in examining the attacks from an intellectual perspective. For five days in a row immediately following 9/11, she and her colleagues asked Emory students to write narratives of their experiences and later performed a long-term follow up to compare the accounts.

They found that as time passed, the narratives became “more coherent and more emotionally modulated” as the subjects tried to extract evidence of positive growth and development from the tragedy.

“For 9/11, it was very hard to find those kinds of redemptive qualities,” Fivush said. “I think that the narrative that came out of it was [that] it brought us together and we overcame this horrific tragedy. As a nation, it didn’t bring us to our knees.”

While Dudziak said the attacks transformed American policies, attitudes and practices, she cautions that the historical events since the attacks are too deeply intertwined for scholars to assign any definitive causality to 9/11 alone. Blaming the attacks for how history has unfolded the past two decades, like in the case of the recently terminated War on Afghanistan, ignores important decisions precipitating and following them that “foreclosed” alternate timelines.

“A lot of what determined the way that history would unfold after the attacks was how the United States responded,” Dudziak said. “There wasn’t one way to respond to the 9/11 attacks. There was a wide range of possibilities.”

Wakefield expressed a similar sentiment, reflecting on the global unity and compassion the United States received as the country struggled to make sense of the tragedy.

“The world showed an outpouring of solidarity with the United States which, in my lifetime, was rather rare,” Wakefield said. “There was a lot of ambivalence worldwide about the United States … and it struck me in that moment that the expressions of international solidarity were quite extraordinary.”

Dudziak argued that the brief window of opportunity for the United States to reconcile some of its strained relations with other nations slammed shut when former President George W. Bush responded to the brutality of 9/11 with more violence by declaring war on Afghanistan.

“That moment allowed for other opportunities that maybe a different leader would have followed up on,” Dudziak said.

Wakefield added that the Bush administration’s half-hearted defense of innocent American Muslims did little to combat the “horrible and blatant” racism directed against them, an attitude that still lurks behind modern immigration policies.

“There was a parallel kind of aggression which ultimately, I think, somehow led to the developments we’ve seen recently in the presidency of Trump,” Wakefield said. “These all have a piece of this idea that the United States is under a sort of vague threat from evildoers from certain parts of the world who look certain ways.”

As Muslims living in Atlanta in the wake of 9/11, Mina Masody (23B) and her family experienced firsthand such “hurtful” prejudices and treatment from other Americans.

“There’s always people who go out and commit things that are against their [group’s] values, their mission,” Masody said. “But we’re held to the standard that’s like, ‘You’re evil, your religion’s evil.’”

For Masody, whose family is from Afghanistan, the attacks were irreparably damaging to American perceptions of the Islamic faith and Muslims. While some white Americans said they found that their grief slowly soothed over the last two decades, Masody said being a Muslim in America has, in many ways, been an othering experience.

“We kind of grew up with this feeling that we should be ashamed of who we are,” Masody said. “Maybe you’re healing from your white perspective, but the generation of Muslims that grew up in America post 9/11 … will never be able to heal from that. That’s a trauma that’s going to be passed on through generations.”

Fivush said the lingering effects of 9/11 — whether as tangible as airport security procedures or ephemeral as the distorted “flashbulb memories” — form a collective traumatic event and are reminders that the wounds are still healing two decades later.

While memory is naturally erroneous and unconsciously revised as time passes, Fivush said accuracy is unimportant when it comes to processing collective trauma. Swapping stories and experiences allows Americans to understand the senseless violence of that event and its consequences and is an important part of the United States’ twenty-year healing process.