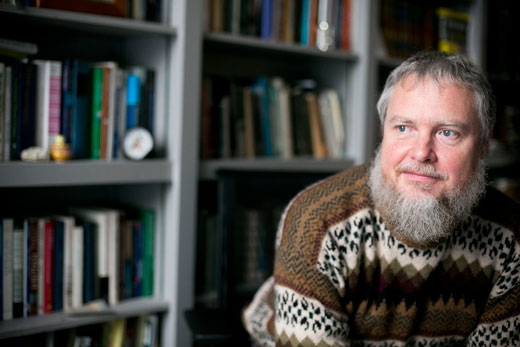 Dr. Mark Risjord is an Associate Professor of Philosophy in the Emory College of Arts and Sciences and has a faculty appointment in the Nell Hodgson Woodruff School of Nursing. He received his Ph.D. in philosophy from the University of North Carolina. He was awarded the Excellence in Teaching Award by the Emory University Center for Teaching and Curriculum in 1997 and the Emory Williams Distinguished Teaching Award in 2004. He is the author of Woodcutters and Witchcraft: Rationality and Interpretive Change in the Social Sciences. His articles and essays have been published in American Philosophy Quarterly, Philosophical Psychology, Perspectives on Science, Journal of Medicine and Philosophy, Canadian Journal of Philosophy and Studies in History and Philosophy of Science. Risjord’s main areas of study include the philosophy of anthropology, the philosophy of language and the philosophy of science. His current research concerns the ways in which moral and political values become part of scientific judgment. The following interview with Dr. Risjord was conducted in person.

Emory Wheel: Tell me about how you first became interested in academia and philosophy.

Mark Risjord: I was raised in Wisconsin. My dad was a professor of history at the University of Wisconsin, and I ended up going there as an undergraduate [student]. I was interested in philosophy pretty early on; I took a course as a first-semester freshman, just a general introduction, out of curiosity. I took a lot of different kind of courses as an undergraduate, largely just because of curiosity. I was interested in a whole range of things, and I ended up settling on anthropology and philosophy as majors.

EW: When did you settle on those majors? Were you ever undecided?

MR: Yeah, I was undecided for a while. I think I knew early on that I liked philosophy, but I also thought it was interesting to blend philosophy with something else [in order] to look at philosophical issues in the sciences. I was interested in physics, but I didn’t have the math abilities to be a physics major – I figured that out pretty early [on].

EW: Can you explain what exactly linguistic anthropology is?

MR: Well, this was back in the late ’70s, and there was a lot of interest in the way that language and thought and culture all fit together — or don’t fit together, as the case may be. I think they’re more related than one might have thought, and so I explored really interesting questions about the way language shapes our interactions with each other, the way we frame problems and address them.

Then there’s the philosophy of language, which studies characteristics of meaning, and “what is language anyway?”-kind of questions. I think those were the kinds of issues that were really interesting to me as an undergraduate, and philosophy, anthropology and linguistics all seemed to be speaking to the same set of concerns.

EW: How did you decide what to pursue?

MR: I applied to graduate schools both in anthropology and philosophy, because I really wasn’t sure which way I wanted to go. I finally decided that my abilities were better on the theoretical side than the empirical side, and the kind of philosophy I do could even be called a very abstract, theoretical anthropology.

All social theorists, whether they’re anthropologists or sociologists or political scientists, at some point, they have to make some fairly abstract claims about their discipline. For example, from anthropology, “what is a culture?” You and I share a lot of things, language in particular, but do we share a culture? How could we define that?

In my view, when anthropologists start thinking like this, they’re starting to do philosophy, because those are philosophical questions. That’s where philosophy and social sciences start to join. I think I saw that as an undergraduate, because there were certain issues that kept showing up in my classes.

EW: Are you saying that once any discipline becomes abstract, it becomes philosophy?

MR: Yes, I would say that; abstract alone probably isn’t enough, but at a certain level the questions become general enough that they become philosophical. More than philosophical issues, they turn into conceptual issues. For example, “what are imaginary numbers? What does it mean for them to be imaginary?” Now, that’s philosophy in mathematics. That’s what interests me about philosophy — the way things connect up and hang together. There’s a mid-20th century philosopher, Wilfrid Sellars, who said, “Philosophy is about the way things, in the broadest sense of the word, hang together, in the broadest sense of the word.”

EW: So has this interdisciplinary nature of philosophy shown up in your research?

MR: Yes. For most of my career, I’ve tried to work with questions that are recognizable in the realm of the sciences. So I could talk to an anthropologist, and they would say, “Yeah, that’s a question I’m asking too.”

Here, I think we should segue into the story of how I got into nursing. In 1998, the nursing school was starting a new Ph.D. program, and I got a call from Sandy Dunbar, who’s now associate dean, saying, “We got your name because you’re a philosopher of science, and we want to put some philosophy of science into our Ph.D. program.”

At the time, I didn’t know there was such a thing as a Ph.D. in nursing. I didn’t know what they did research on, or why in the world they wanted to put philosophy of science in the program. So I talked with them and learned that nursing research actually spans a huge range of topics, and includes anything that a nurse might encounter. It’s not about diagnosing diseases and curing them, it’s all the stuff that goes on around that in terms of health. It’s also all the things that really matter to me as a patient — pain, sleeplessness, these kinds of things.

Everything they’re working with is a tangle of psychology, biology and the social world. I started teaching a course with them and realized there’s all kinds of philosophical issues here, many of them very familiar. A lot of hard questions about how to do social science had gotten translated to this domain and I had a background that was helpful for that.

MR: It’s a field where you get to be very interdisciplinary. Looking at where philosophy’s gone over the past years, I think it’s impossible to really make a contribution to the field unless you’ve got a good grounding in some other discipline as well. Someone who’s interested in philosophy should major in it, of course, but it wouldn’t hurt to be a double major, like I was.

Take a lot of courses in science or some other discipline — whether it’s chemistry, economics, anything — and have a base to build on. At the end of the day, this is what a liberal arts education is for. One of its real joys is that you get to dabble in everything and see how it all comes together. Even if the connections aren’t always obvious on the surface, they’re always there.