University President Gregory L. Fenves delivered his first inaugural address to the Emory community on March 23, seven months later than planned. Fenves elected to spend his first few months as president listening and learning from the student body and faculty during these unprecedented times due to COVID-19.

Fenves, who took office on Aug. 1, 2020, said this past year has had “some of the most difficult days in the University’s history.” He announced that two trees from the Georgia Piedmont forests will be planted to represent the resilience of Emory’s students, faculty, health care workers, police officers, alumni and the city of Atlanta.

One tree will be planted on the Atlanta campus’ quad and the other on the Oxford campus’ quad. Many of these trees, representative of the Piedmont region, have been planted on Emory’s campus in the past to commemorate celebrations and achievements, as well as loss.

Fenves noted that Emory’s mission to “create, preserve, teach and apply knowledge at the service of humanity” is one of the aspects of the school that brought him to Atlanta. He explained that he saw this mission exemplified in Emory’s involvement with trials for the Moderna vaccine. Emory enrolled people in the Phase 3 trial of the vaccine in an attempt to identify the effectiveness of the vaccine before it was available for the rest of the population.

Two hours after the address, the University sent an email out to the students and staff announcing that all students will have the opportunity to receive COVID-19 vaccines through Emory, starting on March 25. This decision was in accordance with Georgia Gov. Brian Kemp’s announcement that all people over the age of 16 could be vaccinated in Georgia.

“We have to remain dedicated to the health of the community as we navigate this final stretch of the pandemic,” Fenves said. “This will allow us to resume our mission on campus with all faculty expected to be available for in-person teaching and research this fall.” 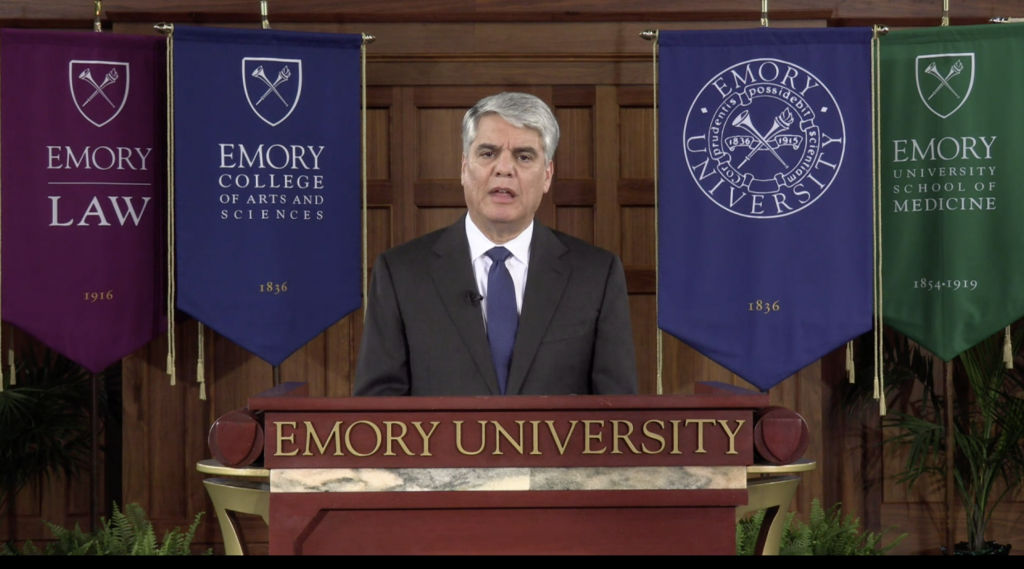 Fenves highlighted several initiatives he started in his first eight months as president. Some of these included recharging the Task Force on Untold Stories and Disenfranchised Populations, which specifically focus on the story telling of Emory’s past of enslaved peoples and the indigienous peoples that previously lived on the land Emory was built upon. It also establishes scholarships for the descendants of the aforementioned people. In addition, Fenves said that alternative names are currently being considered for buildings and celebratory titles at Emory that commemorate persons with a history of ensuing discrimination on others.

“Emory was founded in the American south before the Civil War on Muscogee lands,” Fenves said. “The legacy of human enslavement and subjugation is part of Emory’s history. This was a segregated institution by law and tradition for a longer period of time than it has admitted Afircan American students.”

In order to follow Emory’s “primary mission of education, research and public service,” Fenves stated that the faculty at Emory “must be diverse.”

Fenves addressed Emory’s low retention rates and said he wants to be a first choice for students everywhere. He announced his goal to reach a 97% retention rate in the next three years, which he plans to reach by providing solutions to student debt. He did not specify what those solutions would be.

Throughout his address, Fenves emphasized the importance of community, specifically talking about the ideal of “One Emory.” This University initiative places an emphasis on faculty excellence, an academic community of choice, innovation and interaction with the broader Atlanta community.

“At its essence, ‘One Emory’ is about putting students at the center of all we do,” Fenves said. “It’s about research and creativity that is innovative and integrative. It’s about a workplace where staff thrive and it’s about Emory’s role as a vital thread in the interwoven fabric of the city of Atlanta.”