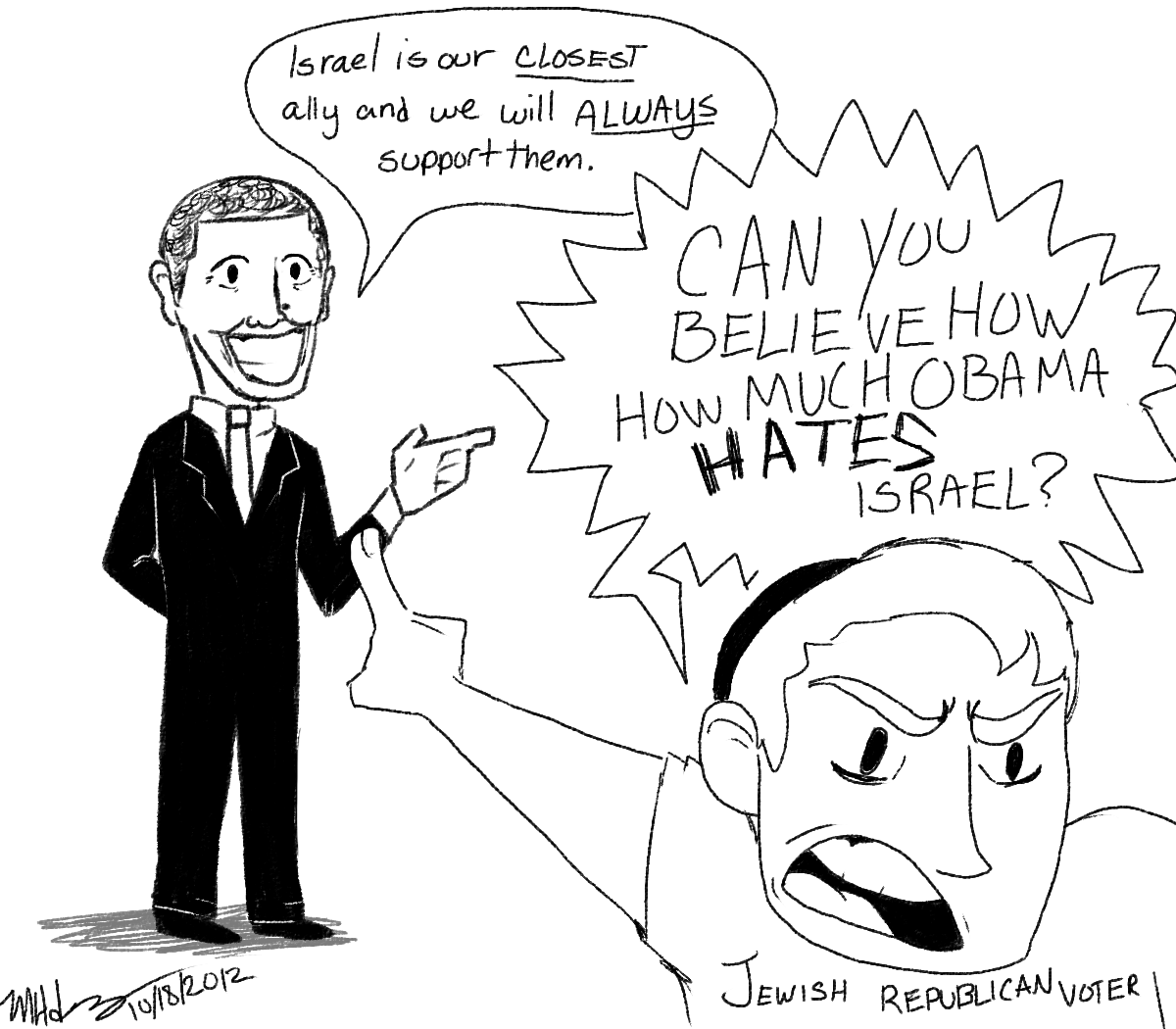 I hear the conversation everywhere.

Well, I suppose it isn’t so much a conversation as it is a statement. My Jewish friends say it all the time: “I’m voting for Romney because Obama doesn’t support Israel.” More often, the statement comes in a blunter form: “Barack Obama hates Israel.”

There is no nation on earth that this country, under this administration, supports more comprehensively and more fervently than it supports the State of Israel. Barack Obama does not hate Israel.

At a meeting in February 2011, the month’s U.N. Security Council president entertained a resolution condemning Israeli construction in the West Bank.

When more than 115 nations moved to pass the condemnation, only one delegate from one country raised her hand: American Ambassador Susan Rice. Because America’s status as a permanent member affords it veto-power (and as per the policy of Rice’s boss), the vote failed and the draft-resolution vanished from the international docket.

Last November, President Obama was recorded having what was meant to be an off-the-record conversation with French Prime Minister Nicolas Sarkozy. Obama told Sarkozy that the United States would “have to impose economic sanctions” if the September 2011 Palestinian bid for statehood went through. In a room bereft of TelePrompTers and absent of television cameras, the American president affirmed his support for policies of the Jewish state.

That same month, Assistant Secretary of State Andrew J. Shapiro – a de-facto representative of and spokesperson for the Obama Administration- delivered a speech to the Washington Institute for Near East Policy. In his remarks, he declared that “Israel is a long time democratic ally and we share a special bond.”

Shapiro went on to note that “some skeptics are questioning whether that’s enough of a reason to continue to spend hard earned American tax payer dollars on Israel’s security.” His rejoinder was frank: “We don’t just support Israel because of a long standing bond,” he said. “We support Israel because…ensuring Israel’s military strength and its superiority in the region is (critical) to regional stability and as a result is fundamentally a core interest of the United States.”

The cash sum that the United States spends on aid to Israel has increased steadily since Obama’s first year in office. According to the Washington Report on Middle East Affairs, in 2009, the administration spent about $2.81 billion on aid to Israel; in 2010, it spent about $3.04 billion; in 2011, about $3.49 billion. That’s an average eight percent increase in each of those three years – not to mention a 14 percent increase between the second and third years.

Israel is the single largest recipient of U.S. foreign aid since the second world war.

Obama has preserved and prolonged that commitment; his budget request for the 2013 fiscal year consists of $3.1 billion in aid to Israel, which includes $99.8 million specifically allocated to joint American-Israeli missile defense development.

President Obama has also sculpted American foreign policy to quell the existential threat posed to Israel by Iran. In his first appearance at the United Nations as president, Obama asserted that if Iran chose to “put the pursuit of nuclear weapons ahead of regional stability…then they must be held accountable.”

He echoed such sentiments in comments during his 2010 and 2011 U.N. remarks. And just last month, he told delegates, “a nuclear-armed Iran is not a challenge that can be contained,” and vowed that “the United States will do what we must to prevent Iran from obtaining a nuclear weapon.”

And if Obama’s words speak, his actions scream. During the summer of 2010, Obama signed into law the Comprehensive Iran Sanctions, Accountability, and Divestment Act (CISADA), which enacted severe penalties for companies who do business with the Iranian petroleum sector. And under the Iranian Transactions Regulations as amended by the Obama administration in March 2012, anyone involved in breaching said laws may be slapped with up to a $1 million fine or jailed for up to 20 years.

Last August, Obama signed yet another set of crippling sanctions against Iran. The law, according to the Wall Street Journal, “closes loopholes in existing sanctions law on Iran, and adds penalties…(and) broadens the list of available programs under which sanctions can be imposed on Iranian individuals and entities.”

A representative of AIPAC recently told me that these Obama administration policies are “the most severe sanctions the U.S. has imposed on any country – even the Third Reich.” Barack Obama does not empathize with the Iranian regime.

The Obama years have seen no adverse change in the way of American policy towards Israel; and yet, Obama’s stronghold on Jewish voters (who traditionally support Democrats overwhelmingly) slips from his grasp each day.

The president’s support among Jewish voters has dropped 19 percentage points since last election season, from 78 percent in 2008 to just 59 percent today.

Why is there a disparity between steps Obama has taken and the approval he’s gained? In truth, today’s underlying “tensions” between Israel and the United States amount to a handful of personal gripes between leaders, a series of ultimately trivial comments on West Bank settlements, and hyperbolic questions surrounding Obama’s ties to the Islamic religion.

These conditions have acted as a frustration in the realm of PR and messaging, but by no means have they given rise to a real shift in policy.

Every day, I hear it from close friends, in op-eds by billionaire Jewish donors, pervading the blogosphere: President Obama is anti-Israel; he exercises evasion in the face of the Iranian threat; his policies are crippling or harmful to Jews, Israelis, or Zionists. I respond to my Jewish friends in a voice that I hope will resound: Any such claim is a rash one, based on perceptions plagued by exaggerations and misreadings. We know anti-Israel; we have seen anti-semitism. President Obama embodies neither.

If you intend to support Governor Romney in this election because you believe that the top 2 percent of the American populace should see its taxes decrease, or that women should have their bodily decisions checked and regulated by wealthy men, or that immigration reform should begin by way of expulsion, I wish all the power to you. But if your allegiance to Israeli security is holding you back from casting your ballot for the Democratic ticket, it’s time to rethink your vote.

Ami Fields-Meyer is a College freshman from Los Angeles, Calif.

For the GOP, Loyalty Trumps Democracy

In the Fight for Abortion Rights and Health Care Equity, Systemic Racism Matters

Georgia: All That’s Right (and Wrong) With America