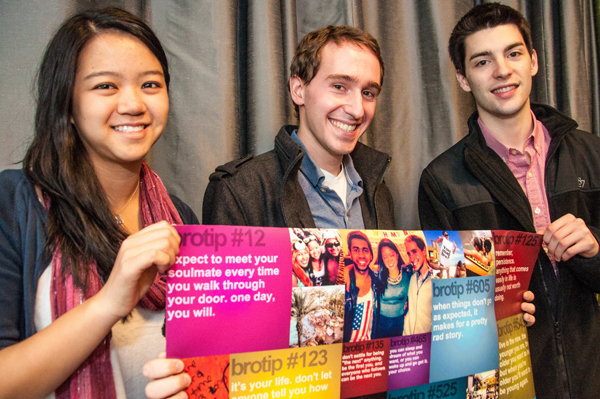 Emory students also share a love for wasting time on amusing social media websites. Consequently, when College junior Dominique “Sketch” Barfield began posting witty responses to the peculiar actions of his peers onto the internet, they quickly gained popularity. Brotips, which Barfield created in March 2011, has since attracted over 500,000 Facebook likes, over 300,000 Tumblr fans, and over 700,000 Twitter followers. Started on the multimedia blogging website Tumblr, Brotips offers daily pieces of advice condensed into a short, quirky quip, such as #305: “If you can’t win an argument, correct their grammar instead,” or #413: “Never make eye contact while eating a banana.”

These two Emory startups recently launched a collaboration allowing customers to use pictures of Brotips on PosterFuse collages in addition to digital media pictures. Both PosterFuse and Brotips are very excited about the collaboration, Barfield said.

Additionally, Chan, Simon and Rayburn said they are looking forward to increasing PosterFuse’s presence through access to Brotips’ large fanbase. The strength of the brand name is enormous, Simon said, adding that when Brotips posts on Twitter and Facebook about PosterFuse, there are huge spikes in the number of visitors to the PosterFuse website.

Barfield said he is glad at the chance to help another startup, hoping he can guide them around the financial mistakes he made when he first started his company.

The collaboration will not only allow Barfield to meet the demands of his followers, but also connect Brotip’s online media to offline goods, Rayburn added.

The companies believe the collaboration has greater significance for the Emory community. While Emory students may feel that there isn’t a vibrant entrepreneurial spirit on campus, Chan said that there is a tight-knit and growing startup community.

“There is a small community doing it,” Simon explained. “We are really passionate and willing to help each other with the next step because we all want to see Emory be the launching pad for the next big company.”

Everyone benefits, Simon continued, because members of the startup community are willing and ready to help each other out.

In the future, the founders of both Brotips and PosterFuse are considering further collaboration with other organizations. Specifically, PosterFuse wants to reach out to music festivals and other events in order to attract customers who post about such events on Facebook or Instagram.

Barfield said he hopes his story will show other students that they are capable of starting their own successful businesses.

As a word of advice for students, Chan said that starting a successful business requires taking chances.

“Take the risk,” Chan said. “If we never put our foot forward and tried it out, we probably wouldn’t have been here.”