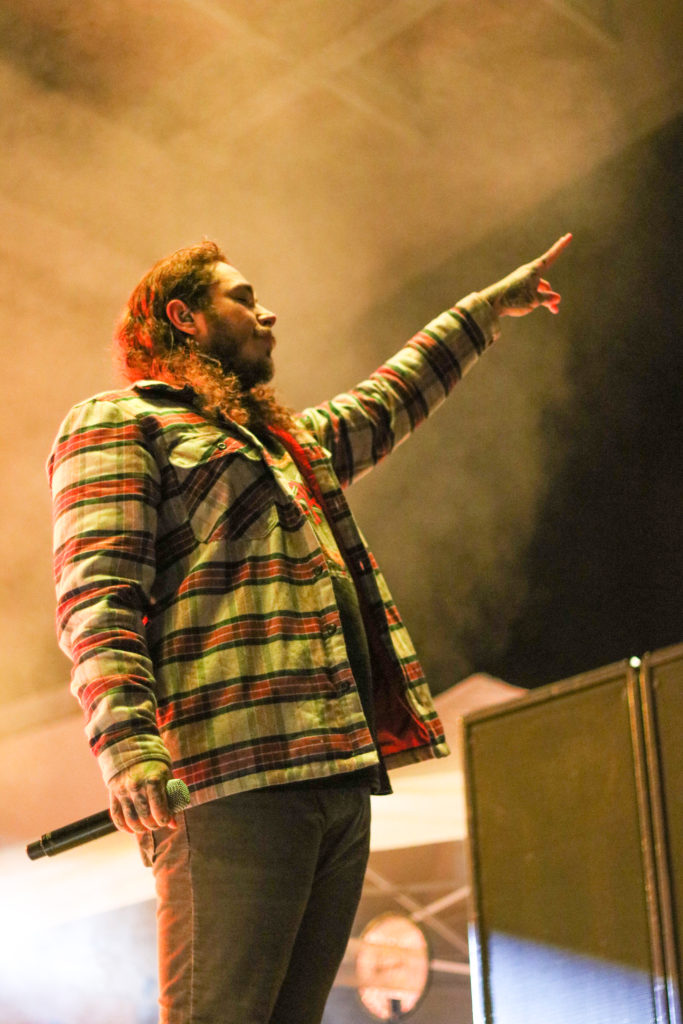 There were the enthusiasts who waited in line outside McDonough Field starting at 8 p.m. for front row spots where they’d be shoved and squished to their hearts’ desires. There were those who preferred to remain toward the back of the field, bobbing their heads and enjoying the spacious and makeshift dance floor — and there were some who were perfectly content with watching the concert from the windows in Few and Evans Halls while tucked into their warm beds. Regardless of your location, the spirit of Emory’s community could be heard from miles away.

Saint Jhn warmed up the crowd for Post Malone’s Homecoming performance Friday night at McDonough Field, setting a laid-back attitude yet emitting intense vocals when performing his top hits “Reflex,” “Roses” and “3 Below” in his signature cheetah jacket against a backdrop of hanging bras. Although concert attendance wasn’t the highest during his performance, he didn’t hold back, nearly falling to his knees with every lyric.

When rapper Austin Richard Post, who goes by stage name Post Malone, finally took to the stage, he made sure to live up to his “Candy Paint” lyrics: “B***h, I’m young stoney, I do what I want.”

From smashing every prop on stage to pieces to overtly smoking on a tobacco-free campus, Post Malone established his stage dominance and rebellious spirit. He kept the performance unpredictable. He entertained with his latest platinum album, “Stoney,” only to whip out a bedazzled guitar, take a seat against minimal lighting and perform a cover of Nirvana’s “All Apologies” moments later.

Post Malone’s “I Fall Apart,” an anthem for the broken-hearted, left the crowd heavy and burdened. In contrast,“White Iverson” embraced his here-to-stay-attitude as he outwardly rejected the label of “culture vulture” — Post Malone sees what critics call appropriation as his own homage to the black hip-hop community he’s been accused of neglecting. The excitement was at an all time high with endless hoots and hollers as the crowd went wild to “White Iverson,” one of Post Malone’s most popular hits, spitting the chorus perfectly. In past years, the rowdy crowd of shoulder-sitting students have been scolded by security, but this year plenty of students were in the air for “Go Flex.” Despite momentarily forgetting the lyrics midway through the song, Post Malone played it off casually asking for a redo.

Audience members waved their hands during “Deja Vu” when Post Malone underlined through heart wrenching vocals the bittersweet tinge felt by those who have loved and been loved, singing, “Tell me, is that deja vu? ‘Cause you want me and I want you.” The screaming and pushing only escalated for “Rockstar,” for which many were secretly hoping 21 Savage, who’s featured on the track, would make a special appearance for a collaboration similar to the Rae Sremmurd surprise at Ty Dolla Sign’s Dooley’s Week performance in the spring. Despite 21 Savage’s absence, nobody was disappointed by the show Post Malone put on, placing emphasis on the hearty “grrra-ta-ta-ta” parts this rockstar echoed. Not only was I impressed by the high-profile artist Emory booked (through a non-fraudulent booking organization), but I was also pleasantly surprised at the strength and command of Post Malone’s voice, sounding even better than his recorded album. When closing time came around, Post Malone got personal, telling the audience that nobody thought he would make it this far in his career, but that now all they have to say to him is “Congratulations.” With that, he threw his sweaty towels into the abyss of students and descended the stage for a final run through, greeting clammy hands with his own. The shrieks of female students were immediately followed by snapshots that would inevitably end up on Snapchat with the caption, “Post Malone touched my hand!”

The audience clamored to hear Post Malone’s rambling monologues of inspiration but more importantly, Post Malone’s sound, which incorporates a Southern influence that exists as more than a strong bass and rhythmic freestyling. For the attraction to Post Malone lies in that he is not a proper hip-hop head. His tendencies toward country/folk vibes has engaged a larger platform than just R&B and hip-hop junkies. However, his real connection to the audience members rests in his charismatic demeanor, which proves him to be your typical braided-haired Dallas boy named Austin who achieved success against all odds.