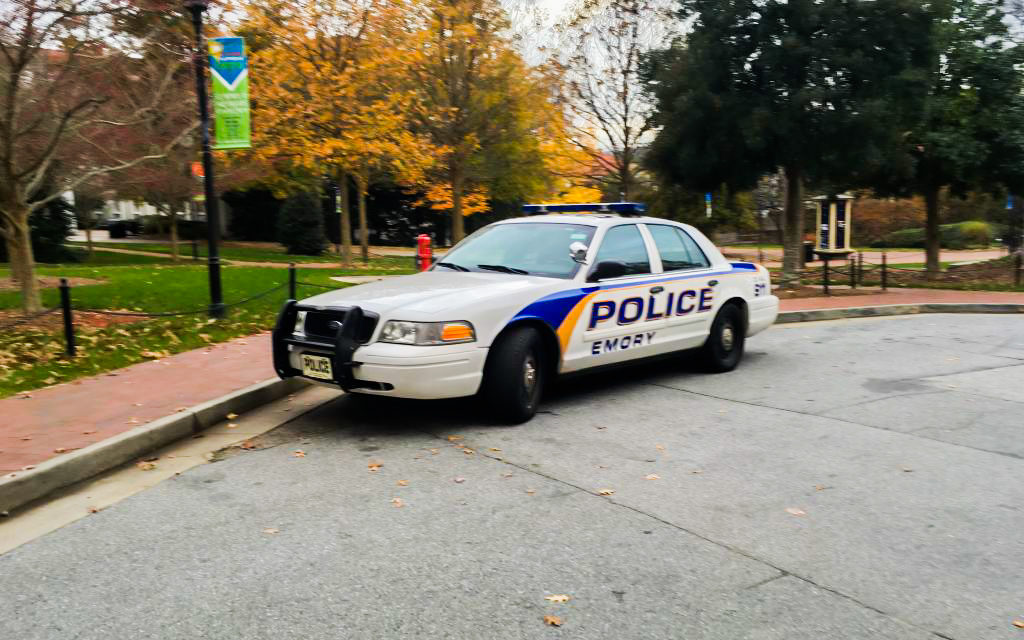 On Sept. 12 at 11:42 p.m., Emory Police Department (EPD) responded to a call regarding property damage at the University Residential Center (URC) Parking Deck. A student’s  2001 Volkswagen Beetle had been egged. The student believed that the incident had occurred within the prior 24 hours of reporting. The car did not appear to have any permanent damage. The case has been assigned to an investigator.

On Sept. 14 at 3:20 p.m., EPD responded to a call regarding the theft of an iPad Air 2 at Few Hall. The student said that she last remembered having it in the fourth floor women’s restroom. The iPad is valued at $650. The case has been assigned to an investigator.

On Sept. 15 at 8:02 a.m., EPD responded to a call from an individual at the intersection of Clifton Road and Old Briarcliff Way N.E. regarding what appeared to be a corpse floating in a stream near the roadway. When EPD officers arrived on the scene, they realized that the figure was actually a female mannequin. DeKalb County Sanitation removed the mannequin.

On Sept. 15 at 3:55 p.m., EPD responded to a call from an Emory student who had lost her wallet. She said that she last saw her wallet Sept. 13 when she was entering her car, and that she realized her wallet was missing Sept. 15 around 2 p.m. The wallet contained $1,000 cash and her driver’s license, as well as her credit and debit cards. She reported that someone had used her Wells Fargo card at a Target store in Atlanta to make a $439 transaction. She added that someone also used her credit card for a $437 transaction. The case has been turned over to an investigator.

On Sept. 16 at 1:50 p.m., EPD responded to a call regarding suspicious activity in Lullwater Park. According to the complainant, an individual caught a turtle in Candler Lake and was planning to take it home and eat it. EPD officers arrived at the scene and spoke with the individual. The turtle was released back into the lake.

On Sept. 17 at 12:59 a.m., EPD responded to a call regarding an underage individual under the influence of alcohol outside Raoul Hall. The student allegedly took two or three shots of vodka at a party in the Pi Kappa Alpha (Pike) fraternity house located at 10 Eagle Row. Emory Emergency Medical Services (EEMS) and DeKalb American Medical Response (AMR) arrived on the scene. The student refused to go to the hospital and signed a refusal to transport form. Campus Life was notified.

On Sept. 17 at 1:34 a.m., EPD responded to a call regarding an altercation at the Pi Kappa Alpha (Pike) house, located at 10 Eagle Row. In the parking lot behind the Pike house, approximately 15 to 20 males had been fighting and throwing glass bottles at one another. When EPD officers arrived on the scene, they saw individuals running into the Zeta Beta Tau (ZBT) house, located at 8 Eagle Row, and the Pike house. A Pike house resident approached the officers and said he was assaulted by an individual associated with Zeta Beta Tau. He said that he was pleading with an individual to put down a baseball bat when an unknown individual threw him on the ground and took his wallet from his back pocket. EPD officers spoke with the ZBT President and College junior Daniel Elchediak, who said that the incident was due to a “little misunderstanding” between the ZBT and Pike fraternities. The majority of the individuals the officers interviewed admitted to consuming alcohol. There were no reported injuries, and the involved parties refused medical services. Officers received written statements from both parties. The case has been assigned to a detective.

On Sept. 17 at 11:41 p.m., EPD responded to a call regarding an underage individual under the influence of alcohol at Peavine Two Parking Deck. The complainant said the individual had been vomiting, and was in and out of consciousness. When EPD arrived, the individual was lying on the ground between two parked cars. EEMS and AMR also responded. The individual said he had consumed at least five mixed drinks while he and a friend were at the Georgia Institute of Technology earlier that evening. AMR transported the individual to Emory University Hospital (EUH). Campus Life was notified.

Correction (9/27/2016 at 6:25 p.m.): The report regarding the altercation between Pike and ZBT originally said that a resident of Pike had been assaulted with a baseball bat. The individual was actually asking an individual with a baseball bat to stop swinging it at people when he was pushed to the ground by another individual.