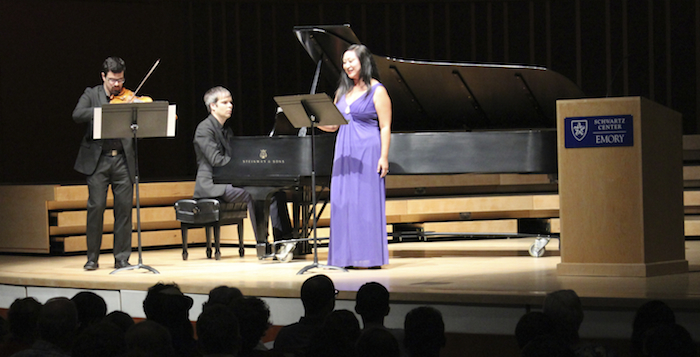 Writers and musicians celebrated Irish poet Seamus Heaney on Thursday in an event titled “A Tribute to Seamus Heaney: An Evening of Poetry and Song” at the Schwartz Center for Performing Arts.

Heaney, who received the 1995 Nobel Prize for Literature, is best known for his works such as Death of a Naturalist and Field Work, much of which focus on family relationships and rural life. In 2003, Heaney donated a substantial portion of his archives to the University’s Manuscript, Archives and Rare Book Library (MARBL). Since 1981, Heaney has conducted several workshops and readings on campus, the last of which was in March 2013 before his death later that year.

The evening’s event was part of the Raymond Danowski Reading Series, a program of the library which brings renowned poets to campus for readings, and consisted of readings and musical performances of Heaney’s poems. Poets and writers read selections of Heaney’s poetry, as well as a piece of their own work inspired by Heaney.

To open the event, Pulitzer Prize-winning author Tracy K. Smith read “Digging,” the first poem in Heaney’s collection, Death of a Naturalist. She then told the audience about her experiences as Heaney’s student ­– she said Heaney’s belief in the soul inspired her own poem “The Soul.”

Former U.S. Poet Laureate and Director of Emory’s Creative Writing program Natasha Trethewey delivered the final reading of the night, juxtaposing two poems: Heaney’s “North,” and her own “South,” inspired by the former. “South” echoed the rhythm and language of “North,” describing Trethewey’s return to her home state of Mississippi and her experiences of racism.

Justin Walker, a first year Master of Divinity student at the Candler School of Theology, said he liked that the writers paired Heaney’s poems with their own work.

“That was more of a conversational tribute,” Walker said.

The night also featured two performances by the Vega String Quartet, Emory’s quartet-in-residence. Atlanta-based soprano Wanda Yang Temko first sang a number of poems by Heaney, including “Rite of Spring,” “A Drink of Water” and “Blackberry-Picking,” while the quartet and a piano accompanied her.

“I did not expect the string arrangement and thought that was brilliantly done,” Walker said.

Grace Hall, a second-year PhD student at Georgia State University, said this was her favorite part of the event.

“It was amazing getting to hear Seamus [Heaney] reading his own poem,” Hall said. “That was such a powerful, powerful moment.”

“I’m really glad I got to see Nick Laird because he’s one of my favorite poets,” O’Leary said. “It’s also fun to listen to people that are really good at writing and reading read Seamus Heaney’s poetry.”

Correction 10/3 at 12:10 p.m.: Heaney’s title was updated from Irish writer to Irish Poet in the first paragraph of the story for clarification purposes.