Hey There, Emory, Here’s To You: The Plain White T’s 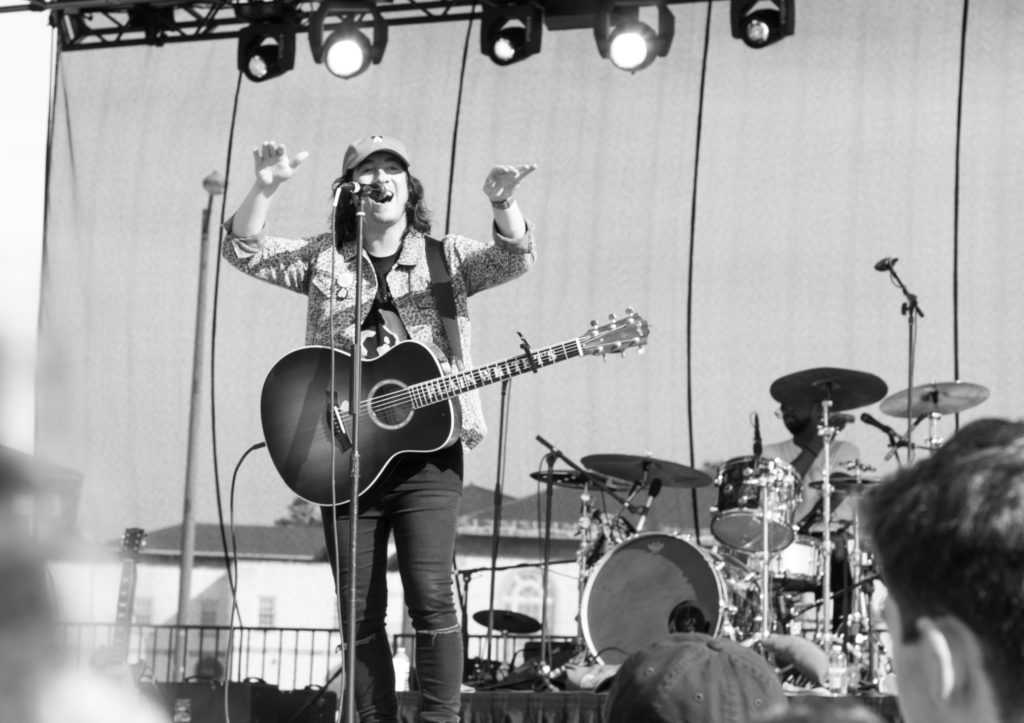 “Hey There Delilah,” a Britney Spears cover by The Hails and a drone made up the most interesting parts of Saturday afternoon’s concert. The Plain White T’s played on McDonough Field Oct. 21 as part of Homecoming and Family Weekend festivities for students, alumni and their families.

The Hails, an on-the-rise alternative rock band from Gainesville, Fla., opened for the main performance. They played tracks from their album “Impel,” like “Come Alive,” which has a harrowing melody and rad guitar riffs, and exemplifies lead singer Robbie Kingsley’s raspy and expansive vocals. However, the highlight of The Hails’ setlist was their cover of Britney Spear’s “Toxic.” The band recreated the trademark riff using a crisp electric guitar, and Kingsley impressed with his sultry falsetto. Despite their quality tunes, The Hails seemed aloof during their performance; the musicians were glued to their positions on stage. By the time the band finally started to connect with the audience, the act was over.

After The Hails, Student Programming Council (SPC) announced the Homecoming Court and Parade float winners and then introduced the Plain White T’s, only one of whom sported a plain white T-shirt, disappointingly. The band opened enthusiastically with “Pause,” an upbeat track with a catchy chorus that Higgenson asked the audience to sing along to. The performance featured overly conspicuous guitar playing from Tim Lopez and aggressive drumming from De’Mar Hamilton, almost as if the instrumentalists were desperately trying to get audience members to engage. Despite the lack of audience participation, the band kept their energy level high for the rest of the concert.

The band’s liveliness continued through “Hate (I Really Don’t Like You),” during which band members channeled all of their rage into the performance. Higgenson’s pre-pubescent, nasal vocal quality was even more apparent through the song’s chorus but blended well with the back-up vocals from the three other guitarists. The harmonies elevated the tension in the angry song and created an crisp texture to the band’s sound. While some audience members appeared bored as they talked over the music, Higgenson bounced around on stage and asked the audience to scream, “Love, love, love.”

Before introducing lead guitarist Lopez as the singer of the next song, Higgenson attempted to make small talk with the audience by inquiring about Atlanta’s weather, similar to the last resort of someone on a failing first date. Lopez sang “Heavy Rotation,” a track with bouncy lyrics that his raspier vocals gave a sultry quality. He elicited some ephemeral clapping from audience members, who must have sensed they were nearing the most important part of the concert.

Every so often, Higgenson would share an anecdote or two after the obligatory applause for the previous song. He sarcastically called Emory’s concert series “like Coachella, but in Atlanta,” spoke of the new album the band would begin recording in three days and their hectic flight schedule. The Plain White T’s even tried a comedy bit by poking fun at The Hails’ band name, promptly after which bass guitarist Mike Retondo suggested they stick to music. During “Should’ve Gone to Bed” people waved excitedly to a drone that approached the stage. Lopez commented, “I love that the drone got the biggest response,” acknowledging the otherwise lackluster audience. Nevertheless, Higgenson graciously thanked the audience for coming out.

Toward the end of the concert, Higgenson randomly shouted “Emory!” several times but rather than receiving cheers from the audience, he found confused audience members, eagerly awaiting the band’s best-known song. The band members disappeared offstage after “Our Time Now,” momentarily sinking the hearts of some who thought the Plain White T’s wouldn’t sing “Hey There Delilah.”

Fortunately, Higgenson and crew returned shortly to ask audience members to sing along to the next song, because Higgenson was “pretty sure everyone knows the words.” At that point, even I abandoned my picnic blanket to approach the stage and indulge in the nostalgia that the epic acoustic guitar and simple lyrics bring. The air was finally filled with the sound of students, parents and alumni singing along, and Higgenson elicited loud cheers and applause by changing a final “Delilah” to “Emory.”

The Plain White T’s ended their set with “Rhythm of Love.” The song began quietly with mere acoustic guitar, maracas and Lopez’s vocals, but grew in complexity with the addition of drums and bass after the first verse. The audience swayed back and forth to the song’s wholesome lyrics, and the band ended the concert with a big, showy drum finish. The last two numbers made the wait through the Plain White T’s cumbersome beginning worth it, and other audience members and I walked away smiling, satisfied with the performance of the modern classic.

The Plain White T’s are a mediocre band that have coasted off the success of one song. While I wouldn’t pay to see them in concert, their Saturday show provided a suitably wholesome event where students and their families could spend time together. But it’s demanding for any band to release hit after hit, and we should appreciate the Plain White T’s for the one great song they’ve given us. After all, “Hey There Delilah” still pervades my playlist to this day, and hearing it live was a memorable experience.