If you pay attention to the wild and wacky world of Emory student politics, you’ve likely heard that Student Government Association (SGA) executive vice presidential candidate Natasha Armstrong (18B) copied large portions of Gurbani Singh’s (18B) platform for the same position from last year. Due to technicalities in the election policy at Emory, the University Elections Board decided to hold a hearing regarding Armstrong’s candidacy.

This hearing never happened, but it would have had little bearing on the outcome of the election. Armstrong is running unopposed, so she’ll almost certainly win the position, as the only other option would be a vote of no confidence. Movements pushing for votes of no confidence have previously been ineffective. Last year, after the Wheel endorsed a “no confidence” vote for Molly Zhu’s (17C) candidacy for College Council president, Zhu still secured 80 percent of the vote.

When voting for a candidate and voting “no confidence” require the same amount of effort, the average neutral voter will vote for the candidate. Voting for a stranger feels almost like doing them a favor, which maintains the positive perceptions most people hold of their own ethics, while voting no confidence feels like an insult to the candidate. This entire episode is essentially pointless, as Armstrong and Singh will both win the positions they’re running for.

The future law student in me wants to pick this argument apart and debate whether or not Armstrong’s action actually constitutes an act of plagiarism. Armstrong did, after all, have Singh’s blessing to use her ideas, messages and paragraphs in her own platform and they’re running on the same ticket. Armstrong’s actions were likely plagiarism nonetheless, as Singh’s permission doesn’t discount the fact that Armstrong intentionally misrepresented Singh’s words and thoughts as her own with the intent of benefiting from them. Handing in your friend’s old paper and claiming it as your own, even with their permission, will land you in an Honor Council hearing. The crime of plagiarism is more about the audience being misled as opposed to the person whose work is being used, and I’d say that Armstrong’s use of Singh’s platform was clearly both intentional and misleading due to a lack of accreditation.

However, the important question isn’t whether or not Armstrong technically committed plagiarism. That  doesn’t matter. What confuses me is the complete and total apathy with which students treat these elections. The fact that only one Emory student is willing to run for SGA executive vice president speaks to a perceived lack of agency in the student body. Why?

The simple answer is that nobody cares. Last year, of the approximately 14,000 individuals eligible to vote in student government elections, only about 3,000 voted to elect SGA powerhouse, Kappa Sigma brother and campus dreamboat Max Zoberman (17C) as SGA president. It’s helpful to consider the issue of voter turnout from a rational action perspective, and compare the costs and benefit of voting. If voter turnout is egregiously low, we can conclude that for the vast majority of people the costs exceed the perceived benefits of voting.

The cost of voting in an Emory University election is low, only requiring about 45 seconds and an active internet connection. The perceived benefit, then, must be even lower as to be non-existent. Students don’t feel their votes will yield perceivable positive results.

And why should they? The issues tackled by SGA these days are of little interest to the average Emory student. The organization’s hallmark achievement this year has been an administrative reform — decidedly the least glamorous of all the different types of reform. While practical, and likely necessary, the entire exercise was patently unexciting.

I’m not faulting SGA here. There’s something to be said about the virtues of a passive and unoffensive government, especially given the country’s current state of affairs. On the other hand, however, the mundane nature of the issues tackled by SGA provides an explanation as to why students don’t care who leads it. Even when the organization inadvertently violated its own constitution earlier this year, most students didn’t know or didn’t care; this blunder simply didn’t affect the daily lives of anyone besides the people in the organization who had to scramble to fix it.

If there’s anything to be learned from this election’s almost-scandal, it’s that not even the candidates feel like they have to try any more. Whether or not what Armstrong did was plagiarism, it was still inexcusably avoidable, and required only the hour or two to draft an original two-page platform. If not for the plagiarism allegations, it’s unlikely that people would have even read her platform.

I won’t urge students to place a vote of no confidence, as I don’t think this would help. Even if Armstrong didn’t care enough to write a new platform, she at least cared enough to put her name on the ballot, which is apparently more than anyone else did. SGA ought to make more of an effort to encourage student involvement in elections and make efforts to debate and pass interesting and salient policy as opposed to arcane and irrelevant administrative measures.

If students were more interested in what SGA was doing, perhaps more of them would run for office. With a healthy dose of competition between viable candidates, the University Elections could begin to resemble a more organic democratic process as opposed to an institutionalized system of landslide victories or unopposed SGA veterans.

Tyler Zelinger is a College senior from Commack, N.Y. 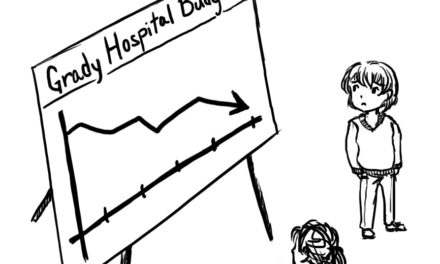 College, a Call To Transformation

If You Support Israel, Support Trump