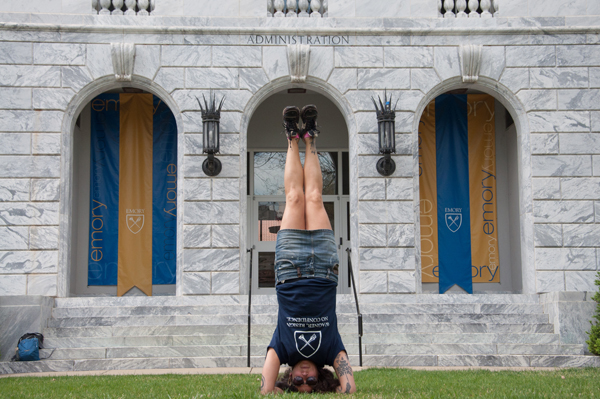 College faculty will finish voting tomorrow on whether or not they have confidence in University President James W. Wagner. And in the midst of awaiting the result, students have begun publicly expressing their views.

A “Keep Wagner” online petition created yesterday received almost 700 signatures by press time Thursday evening. Meanwhile, the Student Re-Visioning Committee (SRC) gathered on the Quadrangle Wednesday to urge faculty to vote “no confidence.” The SRC is a group of students that formed in opposition to the department changes announced last semester and that has protested since the fall.

Supporting Wagner
The petition, available at KeepWagner.com, went live Wednesday night and is directed at the University Senate and Board of Trustees. It states that the signers have confidence in Wagner’s ability to lead the University despite his past mistakes.

“Give him the opportunity to foster an environment in which we can create, preserve, teach and apply knowledge in the service of humanity,” the petition reads.

Potential signers of the petition have to provide their first and last name as well as their email. The entire list of the latest signatures is available on the site.
The signers include members from various sectors of the community, including faculty, alumni and students.

The creator of the petition, a male student who requested anonymity because of his affiliation with a student organization, said he became frustrated after seeing “Stop the Cuts” campaign materials across campus at the end of March.

“It was a very small minority of students being very, very vocal, and I felt like they were being misrepresented as a much larger segment of the student population than they actually were,” he said.

After that, the student made a private website but decided to make the page public to “get everything going” once he saw the Dooley statue in Asbury Circle covered in “no confidence” fliers. He said covering the Dooley statue was “metaphorical” and those who did so defaced something the University holds “sacred.”

The petition also has a related Twitter and Facebook page where the creators encourage followers to share their reasons for supporting Wagner. In addition, the creator placed “Keep Wagner” fliers across campus.

The goal of the petition, the creator said, is to show that many students do, in fact, support Wagner. Hopefully, national media will report on that, he said.

“While Wagner is a very convenient scapegoat … [these incidents] can’t be directly attributed to him,” the creator said. He also said Wagner has set a “wonderful vision of a highly-inclusive campus.”

Today, the creator implemented a moderating system due to an influx of fake signatures, like the names “Kim Jong-il” and “Jefferson Davis.” A little more than 200 emails of the signers were unverified.

Goizueta Business School junior Trevor Pirro, who signed the petition, said he hopes the petition will provide Wagner with another channel of support.

“Let’s be real, everyone makes mistakes,” Pirro wrote in an email to the Wheel. “President Wagner has continuously led Emory to be recognized as an elite institution, and I am still confident that he is right for the job. Everyone who supports him should let it show.”

College junior Raghvi Anand, another signer, wrote that even though she does not agree with Wagner’s actions this year, those mistakes are not an “accurate indicator” of his leadership.

“Removing [Wagner] from the picture of not the solution to addressing all of these problems,” Anand wrote in an email to the Wheel. “Removing Wagner will only leave Emory’s campus more vulnerable at a time where so many issues need to be resolved.”
The petition’s maker hopes that about 30 percent of the student population will end up signing the petition.

Opposing Wagner
Patrick Blanchfield, an SRC member and sixth-year Ph.D. candidate, said the Student Government Association (SGA) legislators denied students an open vote on a vital issue and then supported the administration through a privately-launched petition. Blanchfield referred to the SGA bill that would have added an option to vote “no confidence in the direction of the University is headed” to the student government leadership ballot. The SGA legislature failed the bill.

“In other words, they first failed in their duties as leaders and representatives by working to silence student voices and then turned around and spoke in that very leadership capacity to provide the appearance of a credible ‘student voice’ in support of administration,” Blanchfield wrote.

SRC members wore T-shirts with an upside-down Emory logo and the words, “Wagner, Resign / No Confidence,” during a gathering on the Quad on Wednesday at noon.

Katherine Bryant, a fourth-year neuroscience graduate student and an SRC member, said the group also handed out flyers to prospective students and their parents at the event.
“We know it’s very politically difficult for faculty to come out and speak up when they question the presidential leadership, so we wanted to make sure they knew students supported them in choosing no confidence,” Bryant said.

Blanchfield said he feels faculty should vote no confidence for Wagner because he has “shamefully damaged the credibility of Emory as an institution.”

“His track record of leadership shows a profound disregard for shared governance and transparency in community dealings,” Blanchfield wrote in an email to the Wheel. “Can we really trust a leader of such little legitimacy and poor judgement with the future of our university?”