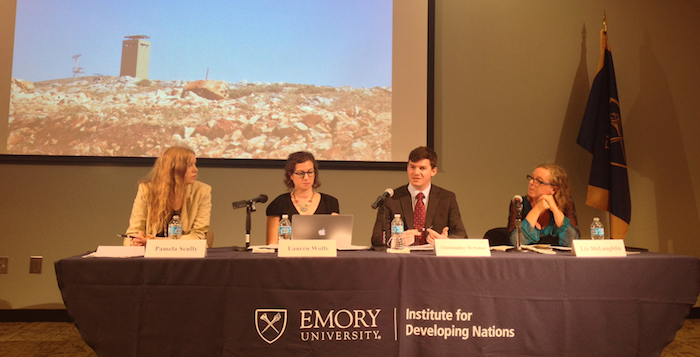 The Emory University’s Institute for Developing Nations (IDN) hosted a panel titled “Sexual Violence and Conflict in Syria,” addressing the myriad and multifaceted problems surrounding the conflict and the widespread gender-based violence occurring there.

The Jones Room in the Woodruff Library was filled with audience members who listened to and interacted with the panelists, who included Lauren Wolfe, director of the Women’s Media Center’s Women Under Siege project and an award-winning journalist; Christopher McNaboe, a program associate at the Carter Center who developed the Syria Conflict Mapping project; and Liz McLaughlin, the associate vice president of CARE, a humanitarian aid group.

The panel was moderated by Pamela Scully, Emory professor of Women’s, Gender and Sexuality Studies and African Studies. Scully, who has written on humanitarian intervention and sexual violence, is also on the advisory board for IDN.

The discussion centered around the epidemic of sexual violence occurring as a result of the Syrian conflict, where over 38,000 people sought help from the UN after surviving sexual or gender-based violence in 2013 alone, according to the IDN.

Wolfe, whose Woman Under Siege project was originated by feminist activist Gloria Steinem and investigates sexual violence in global conflict, relayed personal, painful stories from Syrian sexual assault survivors that she spoke with when reporting near the Syrian border.

“It’s particularly shocking to me how silenced the women in Syria have been,” she said. “Women here have been put up on this pedestal and made to be seen as pure, which makes sexual violence so effective [in war] and shocking to these women.”

McNaboe explained the Carter Center’s Syria Conflict Mapping project, which researches citizen-created online information and social media about the conflict in Syria. He said that over 600,000 videos had been uploaded of the conflict, and, according to the online data, there are more minutes of video of the Syrian conflict than the actual duration of the conflict, which does not even count activity on Twitter and Facebook.

“It creates an incredible history of this conflict,” McNaboe said, elaborating further on the convoluted causes and parties involved in Syria.

McLaughlin weighed in on the difficult role of aid workers in this conflict, who often do not have the resources to make meaningful change. With CARE, an organization founded in 1945 and headquartered in Atlanta that fights global poverty and responds to humanitarian crises, McLaughlin said that the need for psychological help for Syrian survivors of sexual violence is paramount, especially in refugee centers in neighboring countries.

“Within the refugee population, there’s a tremendous psychological need that’s not being addressed,” Wolfe agreed. She added that there is an “incredible taboo in the Middle East about mental health.”

When questions were opened to audience members, some asked about the role of the United States intervening in the Syrian conflict.

McNaboe replied that, with policy-makers, “the debate was always, do we arm, or do we not arm? Since the rise of ISIS, a third option has been refreshingly introduced to the debate, which is – what do we do to protect the most civilians?” He cited the U.S. intervention on Mt. Sinjar as a positive example of the third option.

“I think the panel presented a very important issue that we’re maybe not talking or thinking about enough, especially regarding women,” Laney Graduate School student Rachel Shapiro said. Her favorite part was the personal stories from Syrian women relayed by Wolfe. “It’s one thing to hear ‘30,000 cases of gender-based violence,’ and it’s another to hear personal stories that affect on a more personal level,” Shapiro said.

Wolfe was at Emory last year to talk about sexual violence in Syria at an event called “The Other Red Line: Sexualized Violence in Syria and Beyond” in November 2013, and she and Scully will also take part in today’s 3 p.m. event, “Research, Reporting and Advocacy: New Opportunities and Challenges Facing Public Scholars” at the Rita Anne Rollins Room at the Rollins School of Public Health.

Founded in 2006 by former U.S. President Jimmy Carter and University President James W. Wagner, the IDN is an scholarship-focused, action-oriented partnership between Emory and the Carter Center’s Peace and Health programs that targets global development efforts, according to its website.