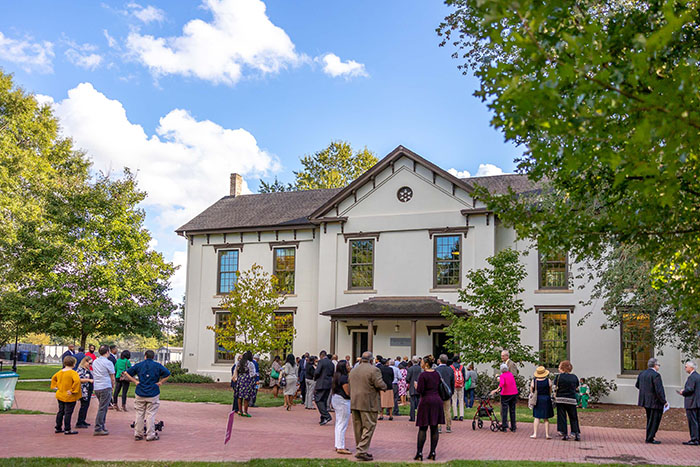 Emory University announced on June 28 that it will rename Language Hall at Oxford to Johnson Hall in honor of the late Judge Horace J. Johnson (77Ox, 79B).

Language Hall was so named because it originally held classes of English, Greek, Latin and modern language. Oxford College hosted the renaming ceremony on Oct. 8..

Johnson was the first Black Superior Court Judge in the Alcovy Judicial Circuit, which includes Newton and Walton Counties, serving from 2002 until his death in 2020.

Additionally, Johnson was an activist, a community builder and a mentor to many students with different backgrounds. At Oxford, he was actively involved in student organizations, including the historically Black fraternity Alpha Phi Alpha.

Bill Daniel (73Ox, 75C), who served on the Board of Counselors and was friends with Johnson, noted the impact that the renaming will have on future students at Oxford.

“I think this is a wonderful step by the University to address the past but look forward to the future,” Daniel told the Wheel. “For 100 years to come, students will walk by, asking who Johnson is, and someone will answer this question for them.”

Oxford College Dean Douglas Hicks emphasized the impact Johnson made on the Emory community by employing justice and compassion in his experiences with others, which Hicks said were “fundamental to who he was.”

“He brought wisdom to every decision and he was a path breaker,” Hicks said. “We just look up to him as a role model. This is a great opportunity to keep this legacy alive with this great building.”

Other friends of Johnson were present at the ceremony, including his former Oxford roommate James B. O’Neal (77Ox). He described Johnson as someone with an amazing ability to put people at ease.

“He always seems to be searching for the inward, the good, the character of the individual versus his or her personality, the persona or the reputation,” O’Neal said. “He searched for the best that people had to offer. After finding it, he was always able to make it a meaningful connection that lasts beyond the moment.”

“Countless of Black students and faculties were not able to learn or teach or thrive here,” O’Neal said. “We are still reckoning with the consequences of our history as a nation and as an institution. Healing and reconciliation are essential for us as a society, as a country and as individuals.”