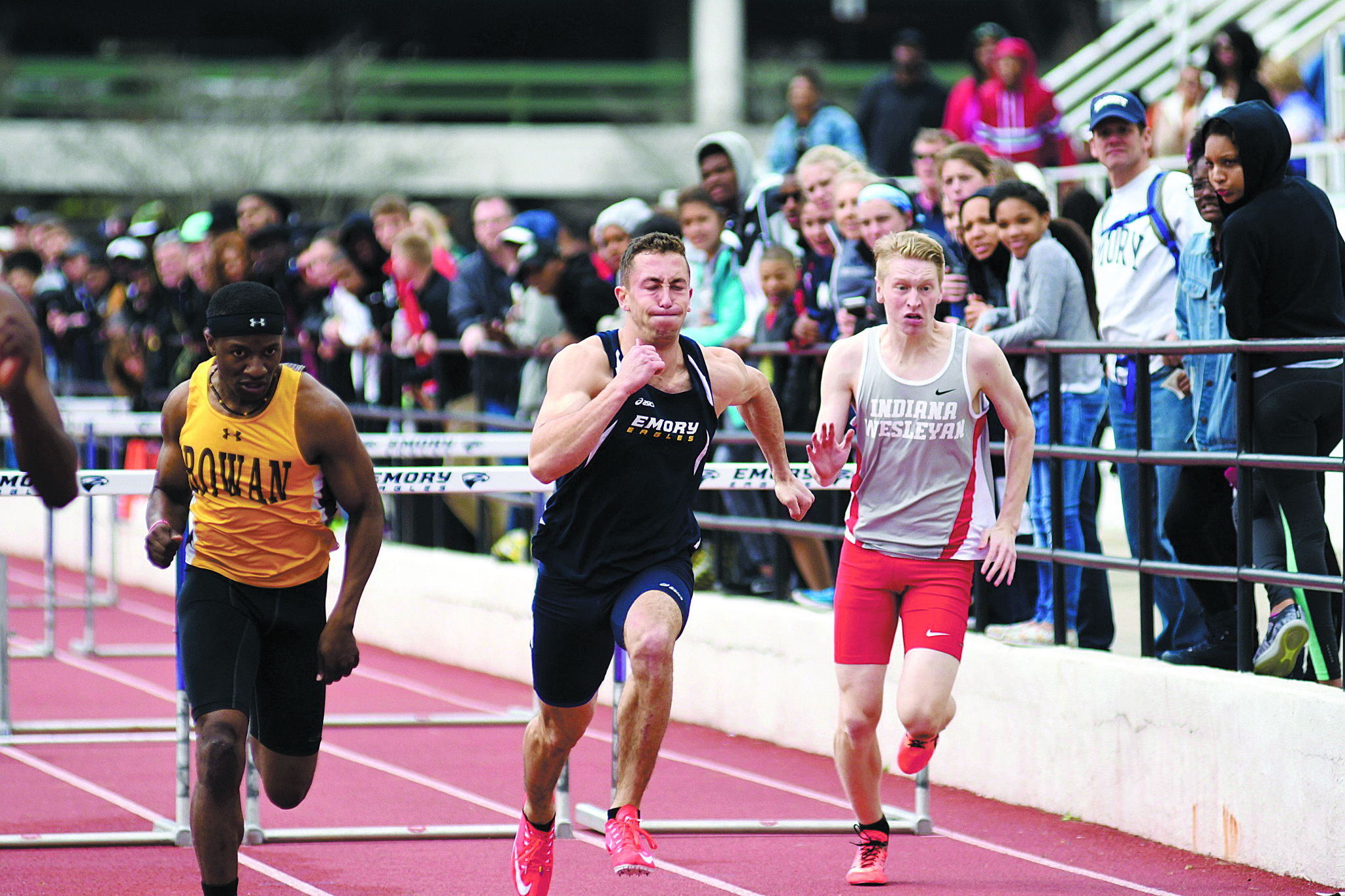 Junior Benjamin Rogin races ahead to a fourth place finish in the 110m hurdles. Gemy Sethaputra/Staff

Emory’s men’s and women’s track and field team opened the outdoor portion of their season at home this past weekend, March 17 and 18, at the WoodPEC. Out of 33 teams, the men placed seventh with 45 points, and the women placed fourth out of 35 schools.

“I told the team before they left for spring break that there was no reason to not go all in to [the] outdoor season,” Head Coach John Curtin said. “[The athletes] responded and I was thrilled to see 31 personal bests this weekend, which usually doesn’t happen.”

The women’s 4x800m relay team kicked off the event by crossing the finish line first with a time of 9:46.10. The team consisted of freshmen Jordan Burgess, Meredith Hughes and Nicole Steiner and sophomore Maeve Andrews. Sophomore Ariana Newhouse finished first in the 400m dash with a time of 56.76, the fastest Division III 400m time in the country this year. Sophomore Dani Bland’s second-place finish in the 100m dash made her the second female athlete in Emory history to break 12 seconds with a time of 11.99.

“For this to be the first meet of the [outdoor] season makes it even more amazing,” Curtin said. “We had some truly mind-blowing performances.”

On the men’s side, the distance medley relay team of freshman Samuel Branson, junior Shane Sullivan and seniors Brandon Cromer and Michael McBane demolished the competition by more than two seconds, finishing with a time of 10:23.10 and breaking the school record in the process.

“The whole team was really excited for the men’s distance medley relay team,” senior Kyle Veator said. “Seeing them put in the hard work not only made a lot of our athletes proud but really inspires us to work hard for the rest of the season.”

Veator, along with freshman Aria Mohseni and juniors Benjamin Rogin and Max Helfman, led the 4x100m relay team to seventh place with a time of 43.14. Rogin clinched fourth place in the 110m hurdles with a time of 15.00 seconds, the sixth fastest DIII time in the country.

The Eagles will compete at home for the second and final time this season at the Emory Classic on March 24 to 25.