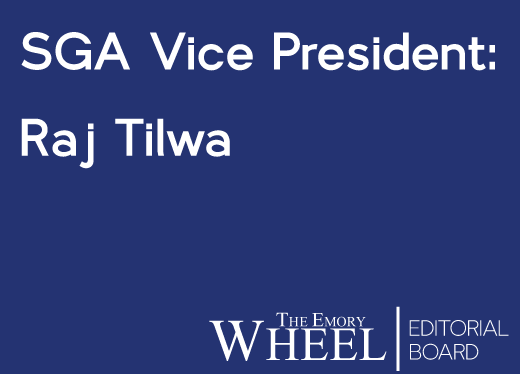 Based on his outward-looking vision for SGA, his previous experience within student government as SGA Representative-at-Large and his tangible ideas regarding communication with Emory’s student body, the Wheel confidently endorses Raj Tilwa for the position of SGA Vice President.

A current SGA representative-at-large and a College sophomore, Tilwa’s platform includes a focus on advocacy for underrepresented groups on campus, including students with disabilities. We feel that Tilwa’s attention to minority groups on campus is important to a student government whose aim is to represent the entire student body and goes hand-in-hand with Darby’s focus on marginalized groups on campus.

To increase communication with the student body, Tilwa has proposed a series of town hall meetings each semester to address important issues in the Emory community. We recognize the value of increased open dialogue with administrators and community leaders about social and political issues relevant to the Emory student body.

Tilwa’s previous experience within SGA has shown a consistent dedication to students’ interests. During December’s discussion over the controversial fee split bill, Tilwa co-proposed to table the conversation about the changes in order to allow more debate and education about the issue. While the bill passed anyway, Tilwa’s efforts to increase debate and deliberation both inside and outside of SGA is notable.

Tilwa has stated an interest in improving the value of an Emory degree by strengthening networking connections between Emory’s undergraduates, graduates and alumni. We feel that this could be a valuable effort, if successful, since such networks can improve educational opportunities and job placement after college as well as alumni donations and interaction with the University.

The Wheel believes that Tilwa’s concrete, feasible ideas and steady advocacy work for students make him a very capable and exciting candidate for the vice presidency of SGA.