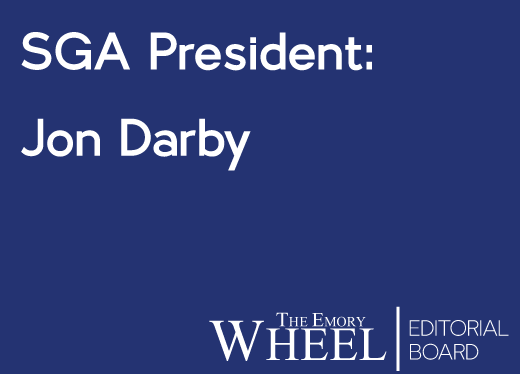 Due to his vision and experience within and without the Student Government Association (SGA), the Wheel endorses College sophomore and current Vice President of Communications Jon Darby for SGA president.

The SGA President has an obligation to represent the student body in its entirety – it should not be an organization that solely dictates the actions of student groups. Darby proves fit for this position through his vision of SGA, a transparent and efficient organization that incorporates the voices of all students on campus, regardless of race, gender, religion or socioeconomic status.

Darby has proven through his platform, interview with the Wheel and candidate debates that he will do everything in his power to ensure that minority groups are being represented and heard. He hopes to create and expand spaces for all marginalized groups on campus, and we believe that he is capable of following through on this promise.

As current VP of Communications, Darby’s platform centers on technology, and he has the appropriate experience to turn his ideas into practice. More specifically, Darby assisted with launching the new SGA and College Council (CC) websites, depicting his ability to concretely enact changes.

Furthermore, his ideas to use technology as a means to increase communication between SGA and the students is a great first step to increase transparency and understanding of SGA. He wants to bring SGA to the people by creating a feedback box on SGA’s website, where students can view others’ ideas and choose to upvote or downvote them. This allows SGA to get diverse opinions from all pockets on campus – integrating student opinions with productive decision-making.

Darby also hopes to make it easier and less intimidating for students to draft a bill by creating a guide catered to students. This will foster dialogue between the student body and SGA, facilitating his vision of all inclusivity and increasing student engagement with SGA.

Additionally, Darby wants to use technology to increase SGA-to-person interaction. For example, he plans to take recording the SGA sessions a step further and introduce live-streaming so students who can’t physically make it to the meetings are still able to stay actively engaged with decisions that directly impact them or, at the very least, decisions that use their money from the student activities fee.

Darby has a very specific vision of the SGA – one that is all-inclusive and technologically efficient. We do, however, encourage Darby to adopt his opponent, College sophomore Kimberly Varadi’s, idea of changing the speaking order at SGA meetings in order to prioritize the students who want to speak and bridge the gap between the legislature and the students.

Additionally, we hope to see Darby advocate for printing stipends, another idea his candidate proposed. This will give students who are financially stressed a small yet important relief. We feel as if these initiatives will be effective additions that will help reach his goals.

Due to his current role as VP of Communications, we feel that Darby will be a potent and productive leader, using a variety of means to connect and inform the student body and therefore better representing the students that elect him.