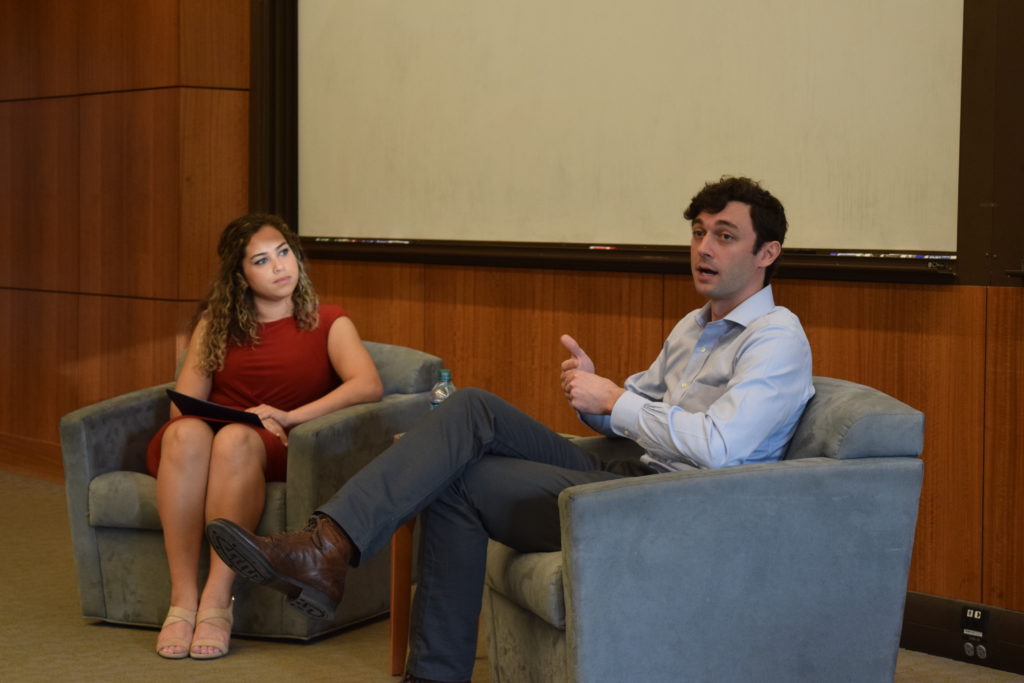 “I think it’s complete nonsense that you need to have decades in another field before joining politics,” Jon Ossoff, 31, said to Emory students./Forrest Martin, Senior Staff

Jon Ossoff discussed his experience in journalism and his 2017 campaign for Georgia’s sixth Congressional district in a discussion with Pi Sigma Alpha President Paola Correia (18C) on April 19. Ossoff spoke to an audience of about 55 Emory students, mostly political science majors.

In the most expensive Congressional race in history, Ossoff lost the special election to replace former U.S. Secretary of Health and Human Services Tom Price’s seat in the U.S. House of Representatives to former Georgia Secretary of State Karen Handel. Price had left his seat to serve on President Donald J. Trump’s cabinet. After the loss, Ossoff returned to his role as CEO and managing director of Insight TWI, a multimedia outlet that produces investigative journalism documentaries and television programs, according to its website.

Ossoff, joined by his fiance Alisha Kramer (18M), spoke about the importance of “anti-corruption” journalism and encouraged students to consider journalism as a career.

Ossoff said that before he declared his candidacy for Congress, he thought that he had little chance of winning because he did not have “built-in name recognition.”

“I did sense that there was a huge amount of energy out there, and that a competent campaign could channel that energy into at least a real contest … I just threw caution to the wind and figured I’d go for it,” Ossoff said. “I thought that there was a potential path to making [the campaign] really competitive and maybe to win.”

Ossoff said he needed to focus on his work with Insight TWI and would not run again in the November 2018. He encouraged the younger generation to become more politically active.

“I think it’s complete nonsense that you need to have decades in another field before [joining politics],” Ossoff, 31, said. “There are not enough young people with power, to put it bluntly. Our generation needs not to be just vocal … but also to have real influence where policy is made.”

Correia, who moderated the conversation, said that she wanted to highlight Ossoff as both a politician and journalist.

Anjali Patel (18C), who attended the event, said she thought Ossoff’s talk at Emory will cause audience members to become more politically active.

“I thought [Ossoff] was super relatable and approachable and he took every question with a lot of dignity and grace,” Patel said. “I think it was really cool to have experienced this race and see him in person.”

“I grew up in the sixth district — in a pretty conservative part of it — and [Ossoff] made a big impact last year, so that was one of the things I wanted to see him talk about,” Otsuki said. “He was really engaging.”