His Holiness the XIV Dalai Lama, Presidential Distinguished Professor at Emory University, began his visit to campus at the Gwinnett Center Arena on Tuesday where he spoke about the need for compassion and education in the 21st century.

The first part of the day entailed a talk from the Dalai Lama, titled “The Pillars of Responsible Citizenship in the 21st Century Global Village,” focused on love, compassion and emotion shared by all mammals and the importance of dialogue.

The Dalai Lama stood in his maroon robes behind an Emory backdrop with a hint of the globe as seen from space.

The crowd broke into applause when, during his speech, the Dalai Lama said, “I think action is more important than faith, than prayers.”

With the help of his translator, the Dalai Lama addressed the crowd of more than 8,000 attendees for a little over an hour.

He emphasized the need to not repeat the violence and horrors witnessed in the 20th century and challenged the world to turn the 21st century into a peaceful one with a “oneness with humanity.”

College senior Benjamin Kramer-Roach, who saw the Dalai Lama speak at Emory in 2010, said he was encouraged to see his light-hearted and loving presence again.

“As a senior I was far more prepared to understand and think critically about the complex themes he brought up in his talk,” Kramer-Roach said.

College senior Sydney Archer, who has seen the Dalai Lama three times including twice during her summer abroad in India, said she feels the Dalai Lama was more focused on his secular ethics this time around.

“I definitely agree that the world needs secular ethics, and secular in the sense of respecting all religions including non believers,” she said. “I really enjoyed a metaphor he gave us ‘anger is like swallowing poison and expecting the other person to die’ – I think that resonated with a lot of people.”

Toward the end of his talk, the Dalai Lama answered selected questions from the audience, one asking him about his childhood.

The Dalai Lama recalled fondly growing up very poor in a village with his mother.

“I learned from my mother,” he said. “She was uneducated and ordinary but very warm hearted; I never saw my mother’s angry face.”

He chuckled heartily and said he had no toys growing up but would climb onto his mothers back in the field and pull her ears. He said it was as if she was a horse and he was steering her into different directions.

Before he left the stage President James W. Wagner thanked him and told the audience a story about a time the Dalai Lama confessed to Wagner that he did not believe he would make a good professor. After Wagner publically disagreed, the Dalai Lama then asked Wagner for a salary.

Wagner joked and said he wasn’t that good.

After a break for lunch, the afternoon session continued with a guest appearance by Richard Moore, whom the Dalai Lama considers to be his hero.

Moore was blinded as a boy living in war-stricken Northern Ireland when he was hit by a rubber bullet. Later in his life, Moore found the soldier who had shot him and made peace with the soldier who goes by Charles.

After Moore spoke, the Dalai Lama returned to the stage this time accompanied by five scientists in a panel session titled, “Secular Ethics in Education.”

Each scientist discussed their findings, which ranged from primate to infant research.

“I specifically enjoyed watching the scientists explain their research and His Holiness connecting their findings to his moral teachings,” Kramer-Roach said.

One highlight of the discussion came when Frans B. M. de Waal, Charles Howard Candler professor of psychology and director of the living links center at the Yerkes National Primate Research Center, shared with the audience his research with Bonobo monkeys.

In one of his experiments he demonstrated that Bonobo monkeys have a sense of fairness and showed a video. The experiment involved giving one monkey a piece of cucumber in return for a rock and another monkey a grape – considerably better liked by monkeys. The monkey given the cucumber was furious and threw the cucumber back as he watched his peer be rewarded much better for the same work.

This sparked a discussion between the panel about whether all mammals share the same emotions like empathy, compassion and reconciliation.

After the scientists presented their work and the panel concluded their  discussion, the Dalai Lama noted that this was just the beginning of fostering the relationship between faith and science and begged the young scientists in the audience to continue their work. 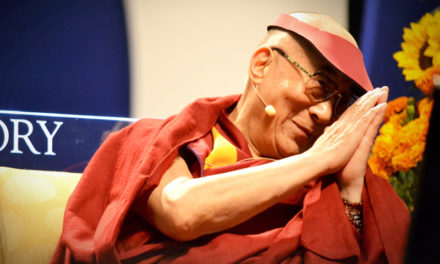 Vice President of Campus Services to Leave Emory After 9 Years