Only a Fan Could Love Fetty Wap’s Newest Album 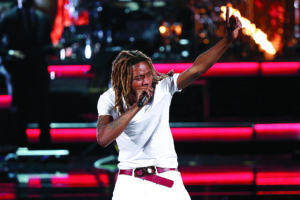 From start to finish, the budding rapper’s latest release, a 12-track project that dropped Jan. 19, offers little in the way of substance or content other than dreamily drug-diluted songs about money and “b******s.” The unabashedly mumble-trap rap album (although it’s closer to R&B) expresses no high hopes or false perceptions about what it is. Throughout the 41-minute run time, Fetty focuses less on impressing others and more on enjoying himself.

The rapper has been off the scene for a while. That is to say he hasn’t gone anywhere —  Fetty Wap has released six mixtapes since his debut studio album “Fetty Wap,” which included the hit single “Trap Queen,” dropped in 2015. None of those mixtapes went big, and Fetty hasn’t appeared on anything of note since, but his name still perks up the ears of most followers of popular music. But it’s those few diehard Fetty fans who should be excited, as this mixtape was ultimately part of Fetty’s best and continuing efforts to raise hype for his forthcoming second studio album, “King Zoo,” likely to be released in 2018.

As its title suggests, this album is not for everyone. With his third and final mixtape of the “For My Fans” series, Fetty delivers more of what his fans want: melody. Words are not Fetty’s forte — sometimes it’s hard to tell if they’re words at all. But add in a healthy dollop of auto-tune, trap beats and some features, throw it all in the oven to hot-box for an hour and you get another classic Fetty mixtape. Songs like “Feels Right” and “Yomi” show the artist in his natural element. His moany, auto-tuned voice sounds more like an instrument than the voice of rapper. That is the appeal of Mr. Wap: You get lost in the soundwaves and the 808. In a way, Fetty Wap has delivered exactly what his fans want.

It seems like the whole mixtape was written and recorded all at once in a foggy, ill-lit bedroom, with Fetty Wap in nothing but boxers and heavy jewelry. Lyrics range from “She always act like she in love and sh*t / Baby you be really in love with d*ck” (“Start It Up,” the first song on the album) to “You can text me in the a.m. or text me in the p.m. / I keep a lot of girls who I hit up when I need ’em” (“Text Me,” the 10th song), and not a whole lot more in between. The closest Fetty comes to being self-reflective is in “Lotto,” the last song on the album, where he spits, “And ain’t nothing free, hope you know you paying for it all.” That line might have had a socially conscious impact had it not been embedded in a verse about dumping money on hoes and clothes (“I’m talking ‘bout fast cars, lot of b***s waiting on your car.”)

The featured artists on the mixtape are equally uninspired and a little disappointing, considering they sound exactly like Fetty himself both in style and content. Sean Garrett, Monty, M-80 and Duke are four relative no-names who make forgettable appearances on five of the 12 songs. Fetty even chooses beats that sound the same; star producers like London On Da Track (“Could You Believe It”) and Zaytoven (“Love the Way”) are far from their creative peaks, with songs that lack the eerie sense of impending doom that London On Da Track is known for, or the eclectic bounce that Zaytoven loves. But that’s OK. This is clearly not meant to be Fetty’s magnum opus.

With this latest mixtape, Fetty Wap shows that he hasn’t evolved much since his last project, and doesn’t sound like he’s intending on going anywhere new in 2018. “For My Fans III” is a harmless soft-core rap album that pleases just enough to not skip to the next song, but not enough to listen to with any critical thought. Fan or no, you may want to keep this album on call — if only for the bedroom.