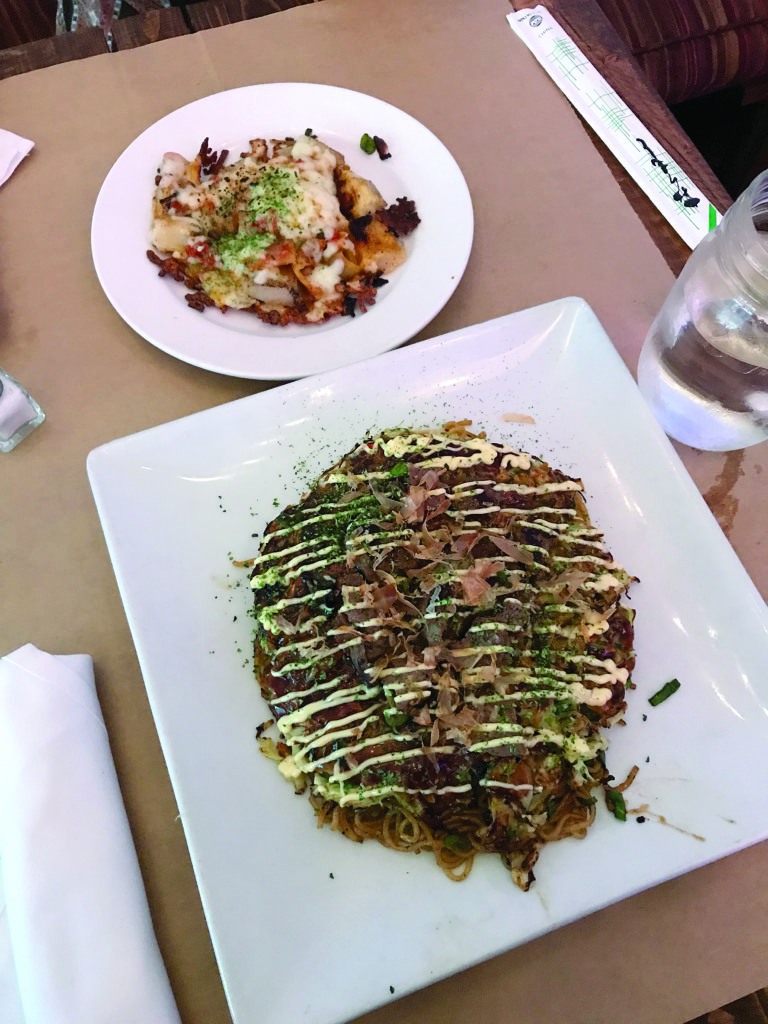 Sun In My Belly is famed for its brunch options, with savory selections ranging from meatloaf to pimento cheese omelettes and traditional choices like biscuits and grits. But on April 5, 6, 12 and 13, the brunch spot has partnered with Japanese street food pop-up Ok Yaki, which aims to introduce authentic Japanese food to Atlanta, for a refreshing new taste.

Telltale Japanese banners hung outside Sun In My Belly and served as a guide for my friend and me when we arrived. Inside, the chef’s table — where they cook the Japanese cuisine in plain sight —  sat prominently in the front of the squeaky clean restaurant. Blue-tinted lighting complemented the cool tones of the neatly aligned abstract modern art. Classic songs, including  “Here, There And Everywhere” by The Beatles and “Death Of A Clown” by The Kinks, played softly on the speakers. Plain wooden chairs and tables lined the floor and because of the restaurant’s simplicity, nothing distracted diners from the Ok Yaki chef’s table; restaurant-goers could stare, mesmerized, as Japanese cookery ensued.

The menu was simple, consisting of four entrees, including yakisoba (stir-fried noodles topped with protein and vegetables, including cabbage and onion) and sides, including hiyashi kyuuri (a Japanese dashi pickle). After a short question and answer session with our waitress, we were ready to order.

My friend and I opted for teppanyaki (small pieces of melted cheese mixed with various vegetables) and the okonomiyaki combo: a Japanese pancake nestled atop thin noodles with cabbage, Japanese barbecue sauce, seaweed flakes, a choice of protein and other tasty ingredients. The teppanyaki appeared to exhibit ideal cheese-to-vegetable proportion. However, I found myself chewing the cheese a while after I’d swallowed the vegetables, which diminished the combination of flavors — melted cheese, cabbage and soybean oil — that should have been present.

The okonomiyaki, on the other hand, was near perfection despite its simple appearance. When I took a bite, I experienced flavor combinations I never could have imagined. The vegetables balanced the sweetness of the Japanese barbecue sauce, and the noodles melted in my mouth. The chunks of steak were small enough to eat with the dish’s other ingredients but packed big flavor. Everything blended together seamlessly. The portion was more than enough to fill both my friend and me.

Prices were more than fair; main dishes cost $7 for a small size and $12 for a large, while side dishes ranged from $3 to $7. Additionally, customers could order combo dishes at $17 for two people. We also received fantastic service; our waitress answered all of our questions and guided us through the beverage menu, indicating personal and crowd favorites including the bamboo fizz: a sweet, alcoholic beverage.

Ok Yaki’s phenomenal Japanese cuisine paired with Sun In My Belly’s cozy setting and fantastic service made for a night to remember. It is rare to find a pairing that works so seamlessly, but this one certainly hit the mark.