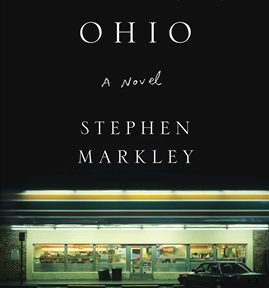 Stephen Markley’s debut novel “Ohio” opens with a funeral parade and a flag blowing from a casket into a tree, becoming entangled among the high branches. It’s a stark, desolate opening that sets the tone for the book that follows: bleak, bleak and even bleaker.

Set in the town of New Canaan, Ohio, the novel concerns four former high school acquaintances as they return to town years after leaving. There’s Bill Ashcraft, a jock whose rabid devotion to far-left politics sets him apart from his peers. Next is Stacey Moore, the lesbian daughter of a deeply religious family who comes to meet the vitriolic mother of her former lover. Dan Eaton, the token shy kid turned Iraq veteran, heads back to meet an old love interest. Finally, Tina Ross, a scarred, broken former it girl, returns for a reckoning with her abusive high school boyfriend.

The plot, what little of it there is, revolves around one momentous night in which all four characters converge on New Canaan. At times, this setup can feel rewarding, especially when the reader sees one event from several perspectives, but at others it can feel slow. Fortunately, Markley intersperses the night with plenty of high school flashbacks; these are some of the best parts of the book. Markley nails the essence of high school: the awkwardness, the tangled webs of friends, enemies and frenemies and the way that people, even those you’ve known since childhood, can surprise you.

These snapshots of the past are especially powerful in the present context of the novel, as the damaged older versions of these bright youths retrace and recross their old paths, reconnecting with people from their past.

New Canaan itself never quite becomes a character the way that other literary towns, from Castle Rock to Empire Falls, have. In part, that’s because the focus remains so much on the characters. While certain town fixtures, such as a diner and a particularly persistent urban legend, do act as mainstays throughout the time jumps, the characters serve as the real landmarks.

The Iraq War marks the beginning of adulthood in “Ohio.” It doesn’t represent the loss of innocence — these characters don’t have much of that to begin with — but it does represent a significant turning point: killing one character, crippling another and pushing a third into radicalism. No one is unaffected by the war, and while politics certainly bleeds into this novel, Markley wisely chooses to focus more on how the war has changed his characters and not the character of the country.

One of the most notable aspects of “Ohio” is Markley’s prose. It’s powerful and primal, sometimes far too much so. At times, the book almost becomes a parody of itself. At one point, Markley compares a torn-up football field to “a cancer patient refusing to shave her skull and letting her hair fall out in irregular tracts.” Remember, he’s talking about a football field.

Fortunately, this type of prose is uncommon; far more often, the reader will find themself struck by a certain line or scene. In one instance, Markley describes two helicopters corralling a massive herd of cattle in South America and paints the scene in grand, apocalyptic terms.

“Urine-yellow clouds wafted over the land, coating the draining day, the horizon ablaze with sickly brown light,” writes Markley. On the next page, he describes a character attempting “to scrape her nails against the ceiling of her imagination and then claw past it.” At one point, Markley describes “a pustule of plugs” next to “a tacky ten-cent painting of Jesus, hands in supplication, eyes fixed Fatherward because he suddenly understood he wouldn’t be carrying on the family name.” These descriptions are Markley at his best: ironic, detail-oriented and darkly funny.

Markley manages to balance the more grand and operatic scenes — including the  aforementioned South American cattle ranch or the opening parade — with equally momentous scenes of conversation and connection, when people meet on lonely back roads late at night at diners and bars. While he occasionally lapses into floridness and pretentiousness, Markley, for the most part, manages to maintain the focus on the human connection at the center of his story.

At first, it may seem like Markley intends “Ohio” to be a book of the times: hot-button issues like the opioid crisis, Midwestern poverty and white resentment hover just beyond the page. This kind of writing often feels forced and unnatural, but Markley manages to avoid this by setting his story in 2013; that five-year gap from the present makes all the difference.

The best part about Markley’s writing is his empathy. There are some purely despicable characters, but they are few and far between. Markley throws in stereotype after stereotype — the jingoistic football jock, the hellfire-and-damnation Christian fundamentalist, the druggie loser — and then subverts them, showing that everyone, even the most inherently dislikable people, are human beings. In the end, that’s what “Ohio” is about: human beings and they way that they connect, fall apart and reconnect again.

Stephen Altobelli (22C) is from Westminster, Massachusetts, majoring in English. He is a resident advisor on the Clairmont campus, an advising fellow with Matriculate and an avid David Lynch fan. In his free time, Altobelli enjoys appreciating art and playing with words. He loves David Bowie and firmly believes that Tilda Swinton should play Bowie in the inevitable biopic. Contact Altobelli at [email protected]