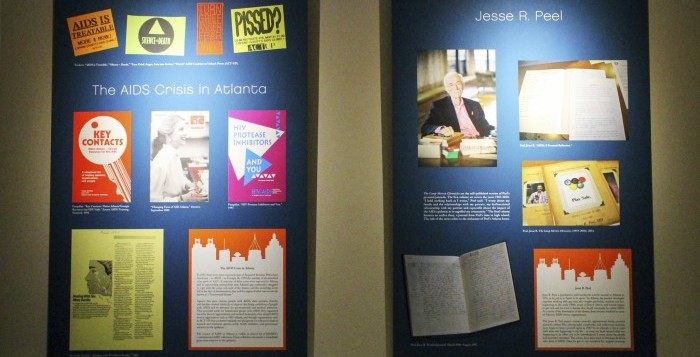 The exhibit, created through a partnership between the Office of LGBT Life at Emory and the Manuscript, Archives and Rare Book Library (MARBL), is a walkthrough art gallery that showcases selections from a 2013 MARBL exhibit titled “Building a Movement in the Southeast: LGBT Collections in MARBL.”​ It will remain in the DUC until Nov. 2.

The exhibit explores the LGBT communities on Emory’s campus, in Atlanta and the American South as well as the history, politics and culture behind them.

The original exhibit that ran from August to May in the Robert W. Woodruff Library was co-curated by Kelly H. Ball, a doctoral candidate in Women’s, Gender and Sexuality Studies, and Randy Gue, MARBL’s curator of Modern Political and Historical Collections.

“We always want to get MARBL materials outside the walls of the library,” Gue said.

MARBL and Emory Libraries Exhibition Manager Kathryn Dixson did not just move the collections and story out to a new space but also transformed the exhibit, according to Gue.

“The [exhibit] in MARBL featured materials in cases; there was more of a museum atmosphere,” Gue said. “The one in the DUC is more like an art gallery.”

The exhibit displays composites made up of photographs, letters, concert and theater pamphlets and publications from cultural and community groups.

The exhibition also highlights materials from the MARBL archives that focus on activists Rebecca Ranson and Jesse Peel and organizations such as the National Association of Black and White Men Together and AID Atlanta.

“MARBL has fantastic collections that document the making of the modern South, and these stories from the LGBT communities are a very important part of that whole,” Gue said.

Interim Director of LGBT Life Danielle Steele said that it is important for us to understand LGBT history, especially because it is not always taught in public or K-12 schools.

“I think the display is a great way for Emory to show pride in how it’s progressed with the LGBT community,” said College sophomore and LGBT Office Video and Design Assistant Ann Hughes. “It’s a nice tribute to the people involved and a cool way for students to learn.”

The goal of MARBL is to let people know about its collections and to learn says Gue.

“It’s a great display, but being that it was tucked over in MARBL, not everybody may have seen it,” Steele said. “By having it here in the DUC, there are hundreds and thousands of people who are going to pass by it over the course of the month.”