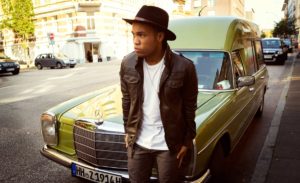 NxWorries (pronounced “no worries”) is a duo comprised of producer Knxwledge and singer-songwriter Anderson .Paak. .Paak burst into the music scene on Dr. Dre’s 2015 album Compton, and Knxwledge has been a staple of underground experimental jazz and hip-hop fusion since 2009. Their latest release, Yes Lawd!, is a left-field, experimental album that eschews pop appeal in favor of lo-fi, uncompromising grooviness.

Yes Lawd! is a spiritual successor to NxWorries’ first EP Link Up & Suede, the project that caught Dr. Dre’s attention and catapulted .Paak into massive success. Link Up & Suede is a small six-track EP that, at less than 15 minutes, manages to fully capture the listener’s attention in each of those precious minutes. Only two songs are fully fleshed-out with choruses and bridges, the title tracks “Link Up” and “Suede.” The other tracks are instrumental interludes, filled with jittery samples and distorted drums, concluding with “Droogs,” a near-unrecognisable remix of a 2014 .Paak song, “Drugs.”

The same themes that made Link Up & Suede such a successful project reappear on Yes Lawd!, in addition to the evolutions of some of the songs from their debut EP. Both “Link Up” and “Suede” are on Yes Lawd!, as well as an updated version of their song “Anthrtime” with a lusher and more layered instrumentation now titled “Another Time.” In a sense, Link Up & Suede acted almost as a demo tape for NxWorries to demonstrate their oddball style of jazzy R&B.

One of the most satisfying facets of any NxWorries project is its distinctiveness. The druggy, distorted production that Knxwledge brings perfectly melds with the impassioned rasp of .Paak. The project is filled to the brim with peculiar samples; at one point, there is an interlude about a bologna and cheese sandwich, and one sample ends with a clip from the critically acclaimed Adult Swim program Rick and Morty. Yes Lawd! is simultaneously funny, engaging, sexy and groovy.

Fans of NxWorries’ previous work might find Yes Lawd! a bit underwhelming as “Link Up” and “Suede” are some of the strongest songs on the project. However, as an introduction to these artists, Yes Lawd! is massively successful. At just over 49 minutes long, the tracks on Yes Lawd! end up averaging at a little less than two-and-a-half minutes each — just long enough to intrigue, but short enough to leave the listener hungry for more. It does bear mentioning, though, that at over 19 tracks, the novelty begins to wear down, and some songs feel more like sketches or rough drafts than fully fleshed-out concepts.

Regardless of its imperfections, Yes Lawd! is yet another clear indicator that .Paak and Knxwledge are some of the most talented modern musicians. Knxwledge is finding more mainstream success, having produced “Momma” on Kendrick Lamar’s 2015 masterpiece To Pimp A Butterfly. .Paak’s most recent album, Malibu, is one of the best projects of 2016, and a .Paak feature is quickly becoming one of the most valuable assets to an artist’s song or album, with features on albums from Mac Miller, ScHoolboy Q and A Tribe Called Quest, just to name a few. NxWorries is a breath of fresh air in an industry that’s rife with copycats and mindless pop music. Yes Lawd! isn’t rap, it’s not R&B and it isn’t really jazz, but it’s absolutely inspired by all of those genres. The neo-soul funk that pulses through the project buzzes and pops, awakening an energy that listeners didn’t know they could feel. It’s an accomplishment that begs to be heard.

Give it a listen.