Nosebleeds: What We Buy and Sell This Week 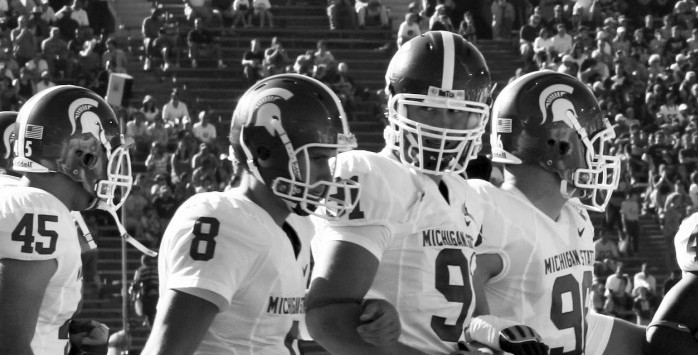 The Michigan State Spartans walk across the field for the coin toss. They were defeated by the Ohio State Buckeyes last Saturday. | Courtesy of Flickr.

Let’s be real, not much happened in the NBA this week. Do you know what this means? We are going to take our talents to other sports as well. We are going be like ESPN and constantly reuse the same gimmick. It is time to play a hyper-speed version of buy or sell.

Things in basketball we are buying (We are just doing this to make the editors happy):

Jacob Durst: Nate and I picked them to be the team that we regret putting so low in our preseason preview, and we already look like geniuses – kind of. We put them too low, but we hedged our bet, and it payed off. They are 7-1, with a solid point differential (+5.4 points per game). They might be in the conversation with the Warriors and Rockets to take Oklahoma City’s spot in the top three in the West.

Nathan Janick: The Rockets and Timberwolves played in Mexico City as part of Adam Silver’s plan to make basketball the second biggest sport in the world behind soccer. While the players shot free throws, the crowd would always whistle just like they do whenever there is a bad call in soccer. As a former varsity basketball player, I can confidently say that this must have been annoying as hell. NBA crowds should adopt this. Only hearing a bunch of yelling and screaming can sometimes be calming, because it just makes you concentrate more on the free throw itself.

Things we are selling:

NJ: This team has lost six straight games, all against teams that did not even crack the top 12 in our NBA Preview. Carmelo Anthony is only scoring 20.3 points per game, while shooting less than 40 percent from the field. I couldn’t tell if I was looking at Carmelo’s stats or Rudy Gay’s. Is Phil Jackson panicking right now? Probably not, because his base salary is $12 million per year and he is not even coaching. The Knicks do have two things going for them: 1) AMAR’E STOUDEMIRE’S EXPIRING CONTRACT! and 2) They look better than the Lakers.

JD: They are 1-5, including two losses to the Kings, one loss to the Durant-less Thunder, a loss to Cleveland and two blowout losses to the Trailblazers. They look bad. Like, really bad. Like I know why Masai Ujiri bailed for Toronto a couple of years ago. This team could rival the Lakers, and the 76ers for the title of worst team in the NBA. Plus, the injuries are continuing. Ty Lawson is banged up, and he is their only good player right now. They will not sniff decency without him being completely healthy and playing at a high level.

Now that the obligatory NBA talk is done (you are welcome Zak Hudak), it’s time to talk about other news in the sports world.

NJ: Some naysayers of the college football playoff argued that it would cheapen the regular season. Boy, were they wrong. This weekend alone the Michigan State vs. Ohio State and Texas Christian University vs. Kansas State games were essentially playoff games, where the loser would be eliminated and the winner is still in contention to make it into the playoffs. By allowing two more teams to compete for the national title game, it increases the number of teams that could make the playoffs exponentially. Right now eight teams – Mississippi State, Oregon, Florida State. Texas Christian University, Alabama, Arizona State, Baylor and Ohio State – have a legitimate shot at making the playoffs. If it were like last year’s system, the other six teams would just be praying for Mississippi State and Florida State to lose. Lets give the NCAA props for doing the right thing for once.

JD: When you can give $70 million to a DH who is 35 years old, you just have to do it. Please note that statement was completely sarcastic. Sure, Martinez is a very talented hitter who should age well, but he is not worth about $17 million a year, when he cannot even reliably defend a position. The market is full of DH only players this year, and a lot of them are cheaper and younger. The Tigers should have spent money on their real weakness last year: their bullpen.