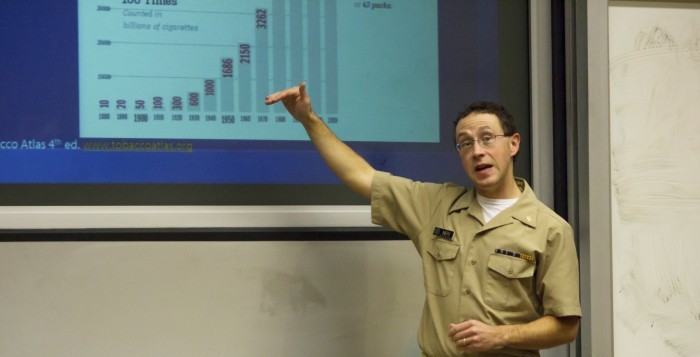 Emory staff and wellness leaders joined forces to encourage smokers to either plan to quit or fully quit smoking on Thursday to promote the Great American Smokeout, a national event established by the American Cancer Society.

The Faculty Staff Assistance Program (FSAP), an Emory human resources program that provides health education and counseling, hosted the event, which recorded over 200 pledges to quit or plan to quit smoking by the end of the day.

On January 1, 2012, Emory officially became a tobacco-free campus. Despite these changes, some Emory community members still struggle to quit smoking.

Throughout the day on Thursday, FSAP staff and wellness leaders from different Emory departments and schools distributed pledge cards and Healthy Emory toothbrushes to employees at Woodruff Circle, the 1599 Clifton Road Building and near the Michael Street parking garage. The toothbrushes particularly highlighted this year’s Great American Smokeout theme, “So Fresh, So Clean.”

“It is the promotion of a fresh start and clean lungs,” FSAP Wellness Specialist Curtis Williams said. “When you have fresher breath, you’re less likely to smoke because you don’t want to upset it.”

Williams was one of the FSAP staff members on Thursday morning handing out the pledge cards and toothbrushes as employees were going into work.

The pledge cards contained a space for employees to write what smoking-related activities they would like to give up that day. Both smokers and supporters filled out the pledge cards. Non-smokers had the option to pledge giving up an unhealthy habit of their own in support of colleagues trying to stop smoking.

“We have 217 pledges recorded so far, and many of those pledgers have included encouraging words to offer those trying to quit,” Williams said. “Our employees have been quite grateful for what we’re promoting and doing today.”

Employees were also encouraged to take the online pledge saying that they would try quitting. Those who took the pledge by noon on Thursday were entered into a raffle to win two AMC movie tickets.

The pledge cards also listed resources available to Emory employees trying to quit tobacco use. These resources include FSAP’s own initiatives as well as Quit for Life, an American Cancer Society-affiliated program that provides aids like nicotine substitutes or other medications, guides and personal coaches to assist those attempting to quit, according to the organization’s website.

“By quitting – even for one day – smokers will be taking an important step towards a healthier life – one that can lead to reducing cancer risk,” the American Cancer Society website states.

Through its affiliation with FSAP, Quit for Life provides benefits to Emory employees as well, Williams said.

While FSAP focused on the health of Emory employees, graduate students from the Rollins School of Public Health were involved in allowing Emory students to experience the Great American Smokeout.

Fadel was also involved in Relay for Life, an organization dedicated to raising awareness and money for the American Cancer Society, as an undergraduate student.

“[As a graduate student,] I wanted to continue to be involved and reach out to cancer-minded organizations on campus,” Fadel said.

Fadel and the Rollins Association for Cancer Prevention and Control teamed up with the Student Cancer Researchers to plan a networking and lecture event yesterday titled “Primary Prevention of Cancer through Global Tobacco Control.” This event was open to all Emory students and focused on the global implications of tobacco use.

Lecturer Neri discussed the connection between lung cancer and tobacco use.

Since there is a lag time between smoking and lung cancer, Neri said, the effects of tobacco use in low and middle-income countries, such as Colombia, South Sudan and South Africa, will be seen in the future.

Neri also presented global initiatives to address the health issues that stem from tobacco use, such as the Framework Convention on Tobacco Control (FCTC), a control treaty in the international community.

Neri then said that while cigarettes account for 96 percent of tobacco sales world wide, other products, such as hookah, cigars and marijuana also have health consequences.

“Is there a link between marijuana and lung cancer?” Neri asked. “Right now, it’s inconclusive.”

He explained that since marijuana has been a widely illegal substance, it has been difficult to generate studies about marijuana’s widespread and long-term affect on health.

Neri stressed the importance of addressing tobacco use in the U.S.

“Tobacco is the leading preventable cause of death in the U.S.,” he said.