After backlash from Emory students, Student Government Association (SGA) presidential candidate Elias Neibart (20C) said that he “disavows” comments he made on Facebook nearly three years ago against same-sex marriage. 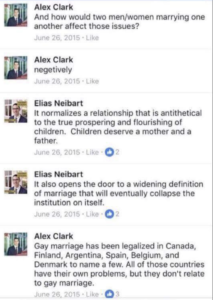 “[Same-sex] marriage normalizes a relationship that is antithetical to the true prospering and flourishing of children. Children deserve a mother and father,” Neibart wrote on June 26, 2015, the same day the U.S. Supreme Court ruled same-sex marriage as a constitutional right. “It opens the door to a widening definition of marriage that will eventually collapse the institution on itself.”

A screenshot depicting Neibart’s 2015 comments was shared by Emory students on Facebook on Thursday night. Neibart recanted his previous comments Thursday night in a statement on his personal Facebook profile.

“The comments I made to this person are not a reflection of my views on same sex marriage,” Neibart wrote. “I value and support that in our country, all people, regardless of their sexual orientation, are allowed to wed, raise children, and love each other.”

Neibart added that, “At the time, I was old enough to know better and I should have known better, but I did not. Now, I can say without reservation that I was wrong and naive.”

Neibart said he would work to be an “ally and a resource” for the LGBT+ community at Emory if elected SGA president. The post received close to 150 likes as of 2:30 p.m.

“As your current attorney general and SGA Presidential candiate [sic], I have striven and will strive to make Emory a more inclusive environment for LGBT+ students,” Neibart wrote. “I will ensure that the LGBT+ community receives the same institutional resources and support that any other community on campus receives.” 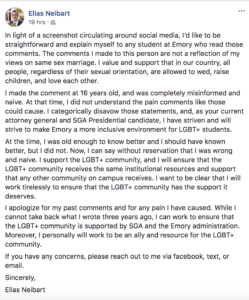 Dylan Frank (20C) told the Wheel that he reached out to Neibart over Facebook Messenger to talk about how Neibart plans to support LGBT students. Neibart agreed to meet with Frank in person.

“At a school like Emory, I feel that it is important for our student government representatives to value diversity, and while I appreciated the statement he made on his Facebook page, I’d love to see him back it up with concrete actions provided he gets elected,” Frank said. “This would show that his statement was truly sincere.”

Neibart has been a supporter of conservative causes for years. He served as the Morristown, N.J., chairman for the 2016 Ted Cruz presidential primary campaign, the Wheel previously reported in October 2016. Neibart said at the time that he disapproved of Emory College Republicans’ endorsement of then-U.S. presidential candidate Donald J. Trump. Neibart also co-founded the Emory chapter of the conservative activist organization Young Americans for Freedom in 2016 and serves as vice president of Emory College Republicans, according to his LinkedIn.